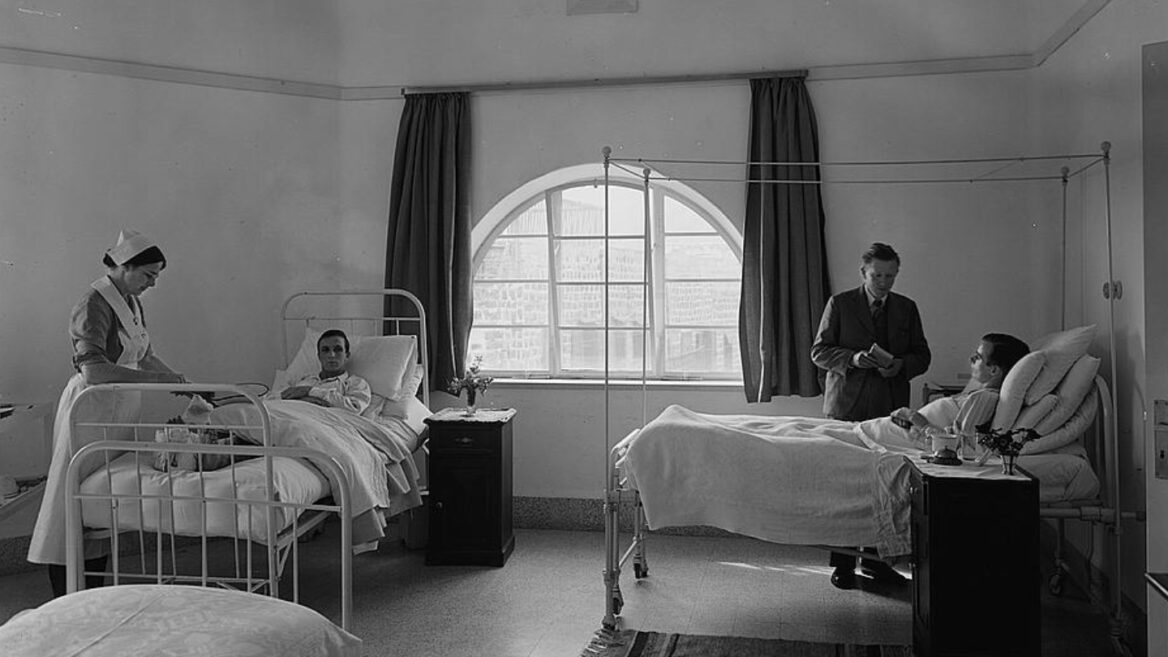 Israelis, along with the rest of the world, are settling into a new reality that changes by the hour, due to the global outbreak of Corona Virus Disease 2019 (COVID-19).

This little slice along the Mediterranean has been through many an epidemic before.

In addition to the plagues mentioned in the Bible, there was the earliest pandemic on record – the Plague of Athens -which came up through Ethiopia and Egypt in 430 BCE; the Justinian Plague of 541 that spread from Egypt to Palestine, the Byzantine Empire, and the entire Mediterranean region; and the Black Death of 1350, which may have originated in Asia and moved west along the Silk Route, to name but a few.

In recent history, disease and pandemics have played a significant role in fashioning the modern Israeli health system.

‘Not a healthy place to live’

And there was much to modernize.

In Reflections on Malaria in Jerusalem, Dr. Vicken V. Kalbian writes, “Most visitors to Ottoman Jerusalem agreed that it was not a very healthy place to live. They referred to the rampant poverty, squalor, and lack of basic municipal services such as garbage collection… Besides malaria, citizens of Jerusalem experienced other common diseases such as typhoid, typhus, cholera, dysentery, and trachoma (the main cause of premature blindness), all of which could be attributed to lack of basic public health services under the Ottomans.”

The 19th century ushered in the Napoleonic Era and the weakening of Ottoman rule.

Between 1831 and 1840, Jerusalem was controlled by an Egyptian force that brought about renewed Christian interest in the Holy Land. Supported by nobility and governments, missions from different denominations began expanding their presence by building churches, schools, clinics and hospitals.

The trend continued even after the Turks regained control. In 1844, the British Consul to Jerusalem Clinic was turned into the English Mission Hospital. Clearly stated over its front gate: “London Society for Promoting Christianity Amongst the Jews.”

As mission hospitals continued to be established in the second half of the 19th century, in order to strengthen the local Jewish population- and to ward off missionaries -the Diaspora Jewish community began making efforts to build hospitals for Jews in the Land of Israel.

Within three decades, a healthcare system was in place.

Rev. Hanna Kildani notes in Modern Christianity in the Holy Land, “In 1872, there were 60 beds in the [Russian] hospital, which rose to 75 beds in 1887. The hospital prospered under the sponsorship of the Imperial Orthodox Palestine Society and became the largest hospital in Jerusalem (the German hospital 40 beds, the French hospital 32 beds, the English hospital 27 beds, the Greek hospital 24 beds, the Bikur Holim Jewish hospital 25 beds, and the Jewish Rothschild hospital 18 beds).”

Jewish and Christian hospitals were also established in Jaffa, Hebron, Tiberias, Nazareth and Safed. A “wandering doctor” service was funded by the Baron Mayer Rothschild to serve settlements in the Galilee.

Cholera & malaria – as common as measles

From 1831 to 1918, in addition to malaria, tuberculosis, smallpox and dysentery, the region suffered from repeated cholera epidemics with high mortality rates.

Quarantine was the major measure taken by the Ottoman government at that time but, particularly in walled cities, it was repeatedly broken by people trying to escape affected areas.

According to a 2005 article in the medical journal Harefuah, “cholera was a major trigger for maintaining a better sanitation and establishing social relief systems within the communities. Cholera outbreaks were the trigger to build outside the old cities as in the case of Jerusalem in which after the 1865 outbreak the city was expanded outside the walls.”

Misgav Ladach Hospital was established in 1888 in the Jewish Quarter of Jerusalem’s Old City after Mayer Rothschild Hospital moved to a new location outside the walls. Credit: Wikipedia

In 1905, British physician and researcher John Cropper, who lived and worked in Jerusalem and Ramallah, wrote that nearly half the population suffered from mosquito-borne malaria.

“Many memoirs describing life in Jerusalem preceding and during World War I make almost no reference to malaria or any other public health problem… and suggests that it may have been so common (as common as measles, for instance) that they did not think it deserved mention,” writes Kalbian in his account, adding that in the late 19th and early 20th centuries, “there used to be a bottle of quinine on every dinner table next to the oil, vinegar, salt and pepper.”

For the Zionists, Anopheles mosquitoes were the enemy, fought by draining the swamps to eliminate breeding grounds and by practicing good health and hygiene. Malaria was largely controlled by the 1930s, and Israel was declared malaria-free in 1968. 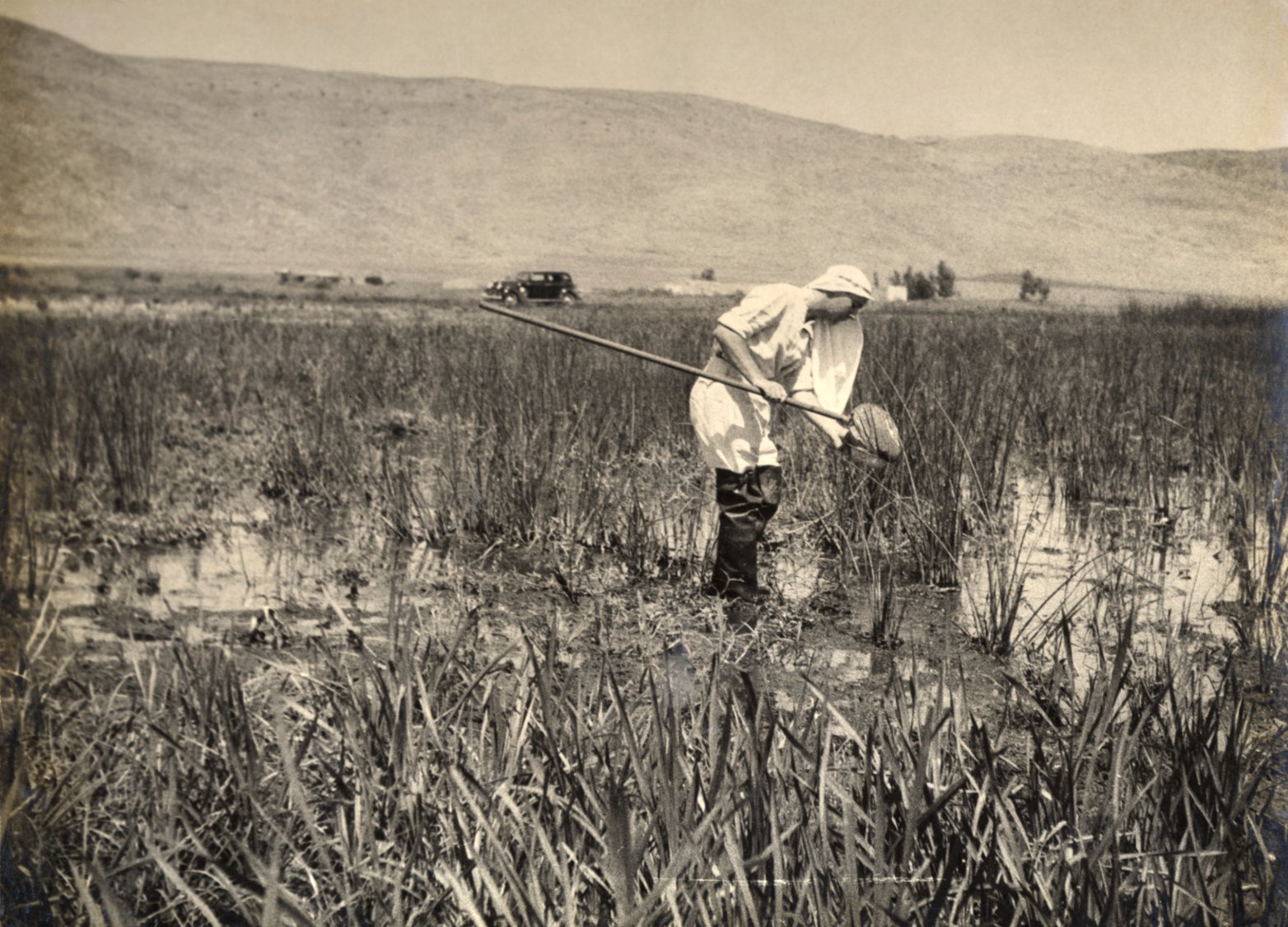 Draining the swamps to eliminate mosquito breeding grounds was taken on as a Zionist cause. Credit: Wikipedia

In 1889, a new virus emerged – the Russian flu. Like coronavirus, it became a worldwide pandemic in only four months.

Its spread was aided by modern transport methods like railways and transatlantic ship crossings. In Ottoman Palestine, it was conjectured that Russian pilgrims were the likely carriers. 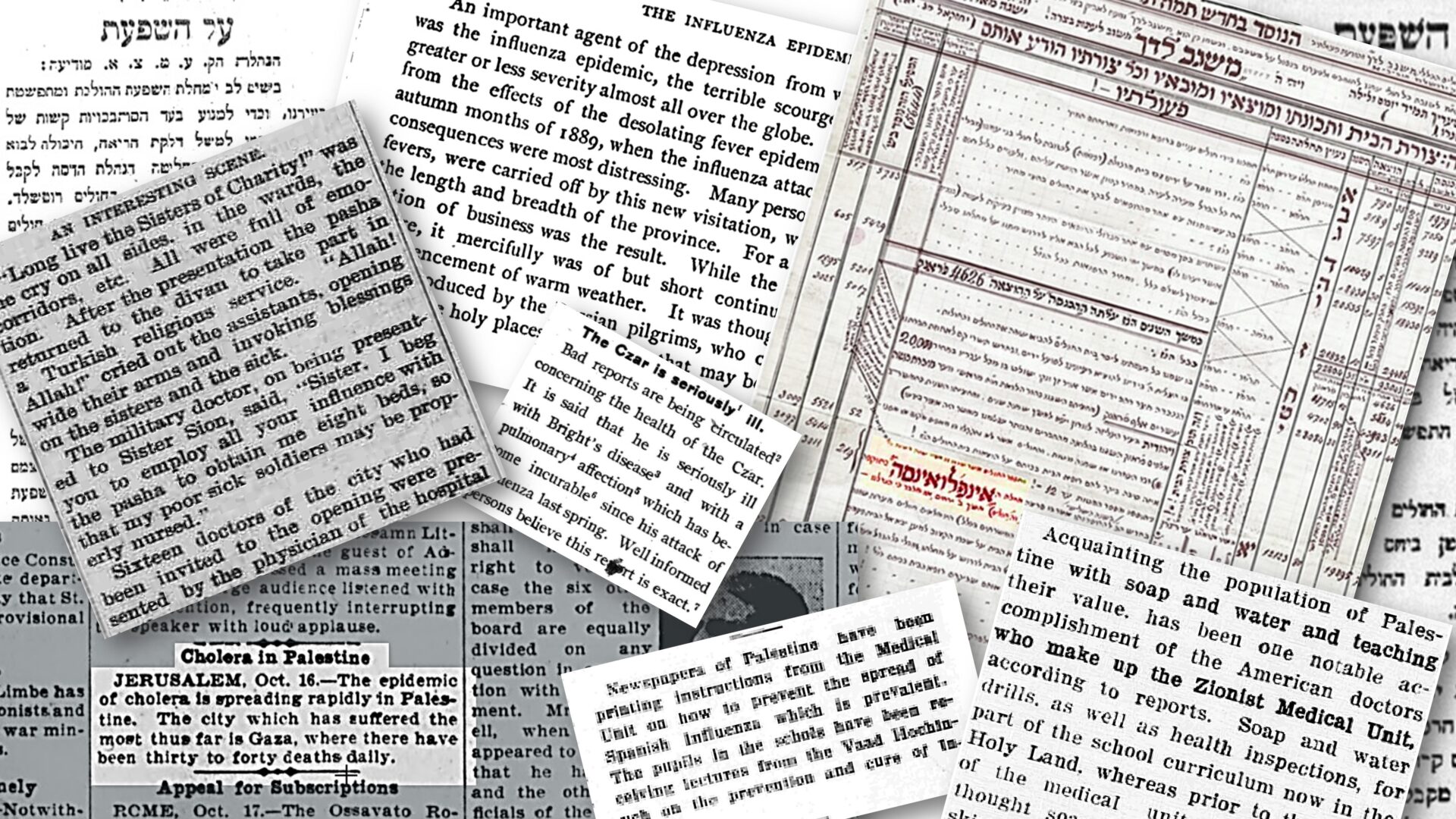 Business also suffered. Reporting to Congress in 1890 about the effects of the Russian influenza on commerce and trade, US Consul to Jerusalem Henry Gillman wrote, “We had scarcely recovered from the effects of the desolating fever epidemic of the summer and early autumn months of 1889, when the influenza attacked us with violence. The consequences were most distressing. Many persons, already weakened by the fevers, were carried off by this new visitation, which rapidly spread through the length and breadth of the province. For a time almost complete stagnation of business was the result.”

The “desolating fever epidemic” probably was due to cholera and malaria. The effects of these ever-present diseases and the next pandemic would be inextricably intertwined.

In August 1916, there was a cholera outbreak among British army troops in transit camps in the Sinai desert. 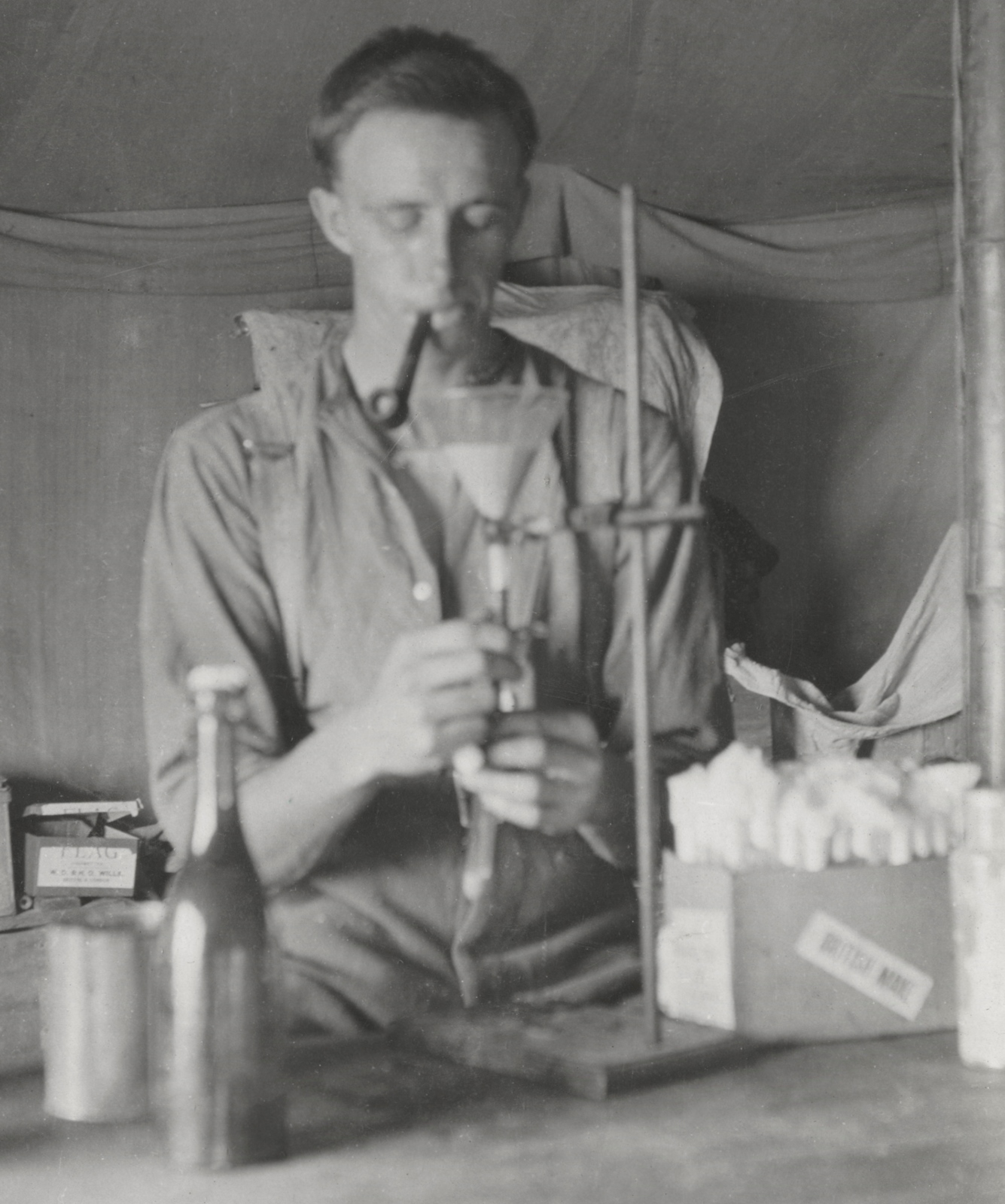 A medical unit – eventually called the ANZAC Field Laboratory – was set up with the mission of stopping the disease from crossing the Suez Canal. Once the cholera threat had passed, the Field Laboratory was tasked with combating malaria. It moved, with equipment borne on horses and camels, across the Sinai toward the Jordan Valley.

General Edmund Allenby, who had assumed command the British Army’s Egyptian Expeditionary Force (EEF) in late June 1917, was ready to go into battle, even in the face of malaria.

While there are no exact mortality figures for the 1918 Spanish influenza pandemic, it is generally considered the worst demographic disaster of the 20th century.

According to the US Centers for Disease Control, about 500 million people — one-third of the world’s population then — were infected with the virus. At least 50 million died.

On October 31, 1917, the EEF launched one of the last great cavalry campaigns and defeated the Turkish Army in the Battle for Beersheva.

This victory would soon be overshadowed by twin epidemics of malaria and Spanish Influenza. The synergy between the two diseases appeared to be particularly lethal.

“In the Egyptian Expeditionary Force (about 315 000 soldiers), disease casualties outnumbered those due to combat by more than 37 to 1,” writes infectious disease expert G. Dennis Shanksin “Simultaneous epidemics of influenza and malaria in the Australian Army in Palestine in 1918.

This deadly duo did not spare the 7,000-strong British Army Jewish Legion. According to Kjell Jostein Langfeldt Lind’s “The Impact of the 1918 Spanish Influenza Pandemic on Greater Syria,” The Jewish soldiers that saw action in the Palestinian theatre suffered disproportionately to their modest contribution on the battlefield. Their casualties are usually reported as due to malaria. It is highly likely that the flu virus interacted with the malaria parasite.”

Most British military operations were curtailed before the final battle of the Palestine campaign in September 1918. Success may have been due, in part, to the fact that the Ottomans were also hit by both malaria and influenza.

The civilian population fared no better.

On April 6, 1917, Governor Pasha authorized the forcible deportation of the entire civilian populations of Jaffa and recently established Tel Aviv. During the 1917-18 winter, an estimated 1,500 of the deported Jews died of famine and disease.

After the British conquest, the deportees began returning and the problem of relief became acute. In a 1919 news interview, Dr. M.D. Eder of the British-based Zionist Administrative Commission described a situation in which 6,000 homeless exiles were to be repatriated.

“Following this came the question of hygiene, aggravated by the epidemic of influenza which affected Palestine as it has affected the rest of the world. The weakened condition of the population and lack of proper food made this epidemic particularly disastrous. This was followed by an outbreak of cholera in Tiberias…”

The British Mandate: A new era in healthcare 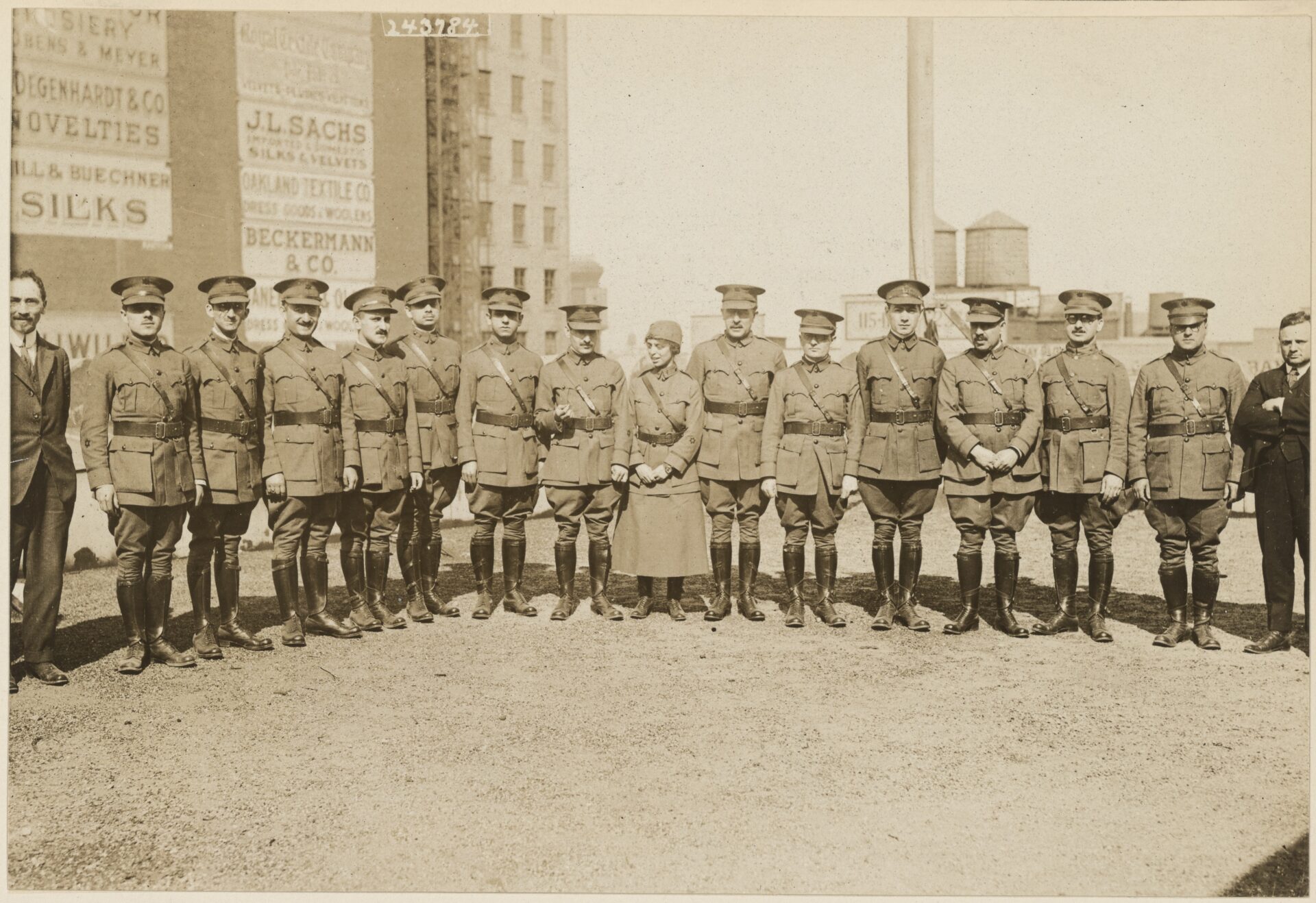 With the advent of British military rule, a new chapter in public health began, combining public services and private organizations, and providing a model for the future State of Israel’s healthcare system.

The Health Department, established in 1922, operated hospitals, clinics, and laboratories. Vaccinations for typhoid, cholera and smallpox were made compulsory. The British army’s anti-malaria campaign that had started with the Field Laboratories continued draining swamps and covering wells.

Eye clinics, school medical services, well-baby and outpatient clinics mainly served the Arab population, while the Jewish sector was given license to provide its own services. 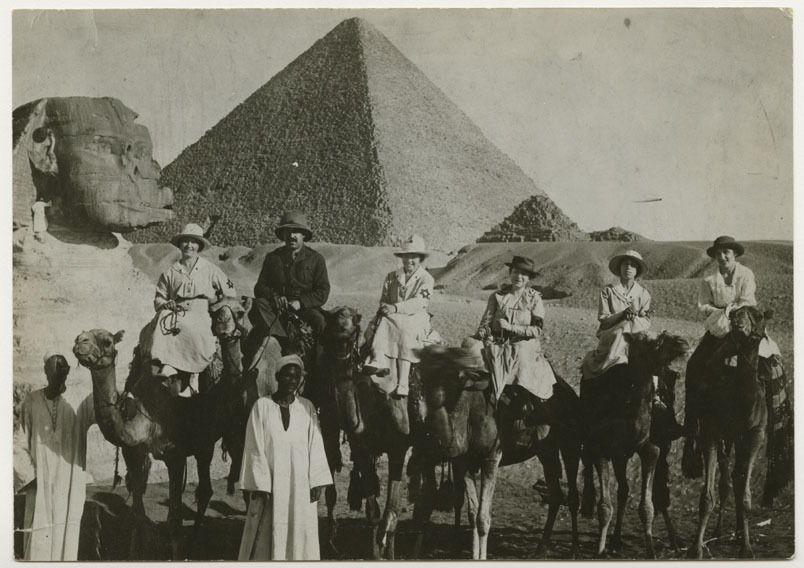 Hadassah Women, established in 1912 to provide healthcare in Ottoman-ruled Jerusalem, sent two nurses in 1913 to set up a small public-health station for maternity care and trachoma treatment. However, the station was shut down in 1915 as the Ottomans suspected Jews of being enemy sympathizers.

Three workers’ “sick funds” founded in 1913, 1915 and 1916 were united in 1921 under the auspices of labor union Histadrut (General Organization of Workers) and renamed Kupat Holim Clalit (General Health Fund). Other HMOs soon followed and by the late 1950s, almost 90% of Israel’s population was insured.

Which may explain how, when the Asian flu pandemic of 1957 circled the earth, Israel’s health system was able to deal with the disease so effectively that it, along with Western Europe, the US and Egypt, placed among the lowest on The Journal of Infectious Disease’s scale of 46 countries ranked for excess mortality due to pneumonia and influenza.

Today, Israel’s health system ranks among the world’s best, with universal basic healthcare, top hospitals, and world-leading medical and clinical research, medical technology and biotechnology. We’ll just have to wait and see how it copes with the latest pandemic to hit the world.