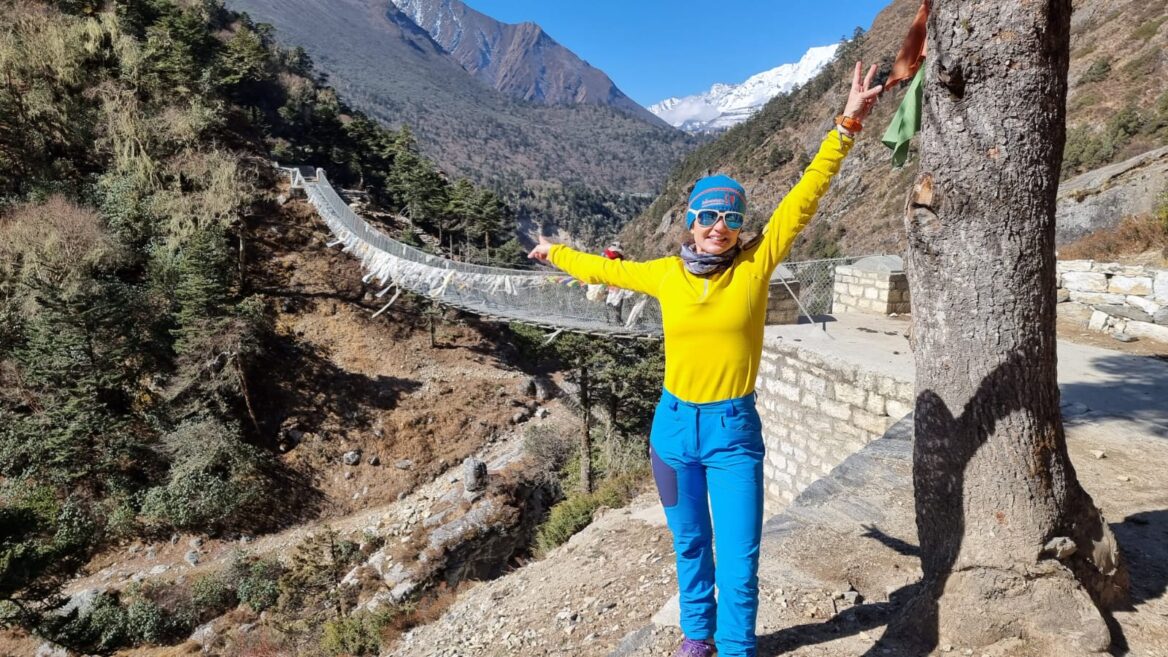 Danielle Wolfson’s oxygen tank was almost empty as she neared the peak of Mount Everest on May 23.

At such a high altitude and low temperature, she knew she could just sit down and await a quick death. She’d stepped over bodies of previous climbers who’d done exactly that.

“We Israelis are a little aggressive and very creative,” Wolfson told ISRAEL21c after becoming the first female Israeli to reach the top of the 8,849-meter (29,032-foot) peak, where she unfurled an Israeli flag. 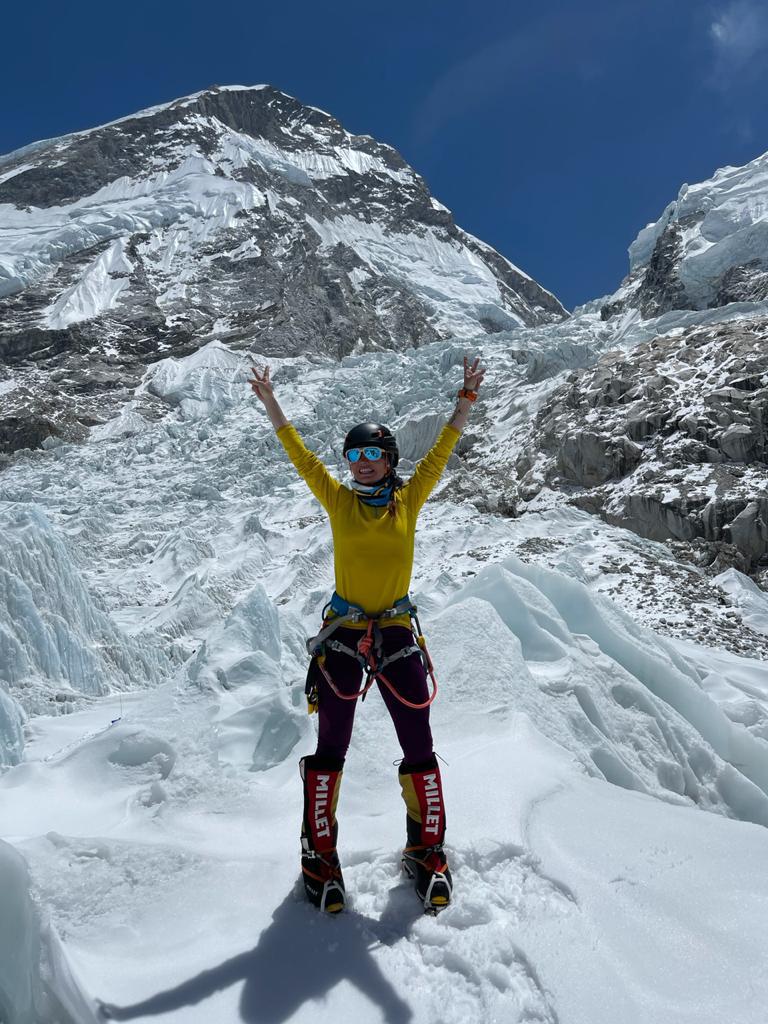 Wolfson knew that three other expeditions had been forced to turn back due to Covid-19 infections. She also knew that local guides hide oxygen balloons toward the top, in anticipation of need.

So she looked around and found an oxygen balloon marked for one of the groups that never made it that far.

If not for Wolfson’s quick thinking, her 22-year-old son would be reading the will and testament she prepared before leaving for Nepal rather than celebrating her extraordinary achievement.

“Every person that climbs Everest must understand he can die,” Wolfson says.

What, then, motivated her to become the fifth Israeli ever to summit the world’s tallest mountain?

‘I wanted the title’

“Ten years ago, I had a ski accident in Bulgaria and broke my right leg,” she relates.

“After surgery, the doctors told me I would never walk unassisted. I was a young woman with a lot of motivation. And I said to myself, I will show everybody. I will climb Everest.”

Reaching that goal took 10 years of hard work — and a lot of time and money.

She began by joining a running group led by Daniel Keren, who summited Everest in 2009.

“He inspired me, and he introduced me to mountain climbing,” Wolfson says. “The first time I was in Nepal it was with him.”

She got to know many female Israeli rock climbers, but mountain climbers (alpinists) were all male. That only strengthened her determination to climb Everest. 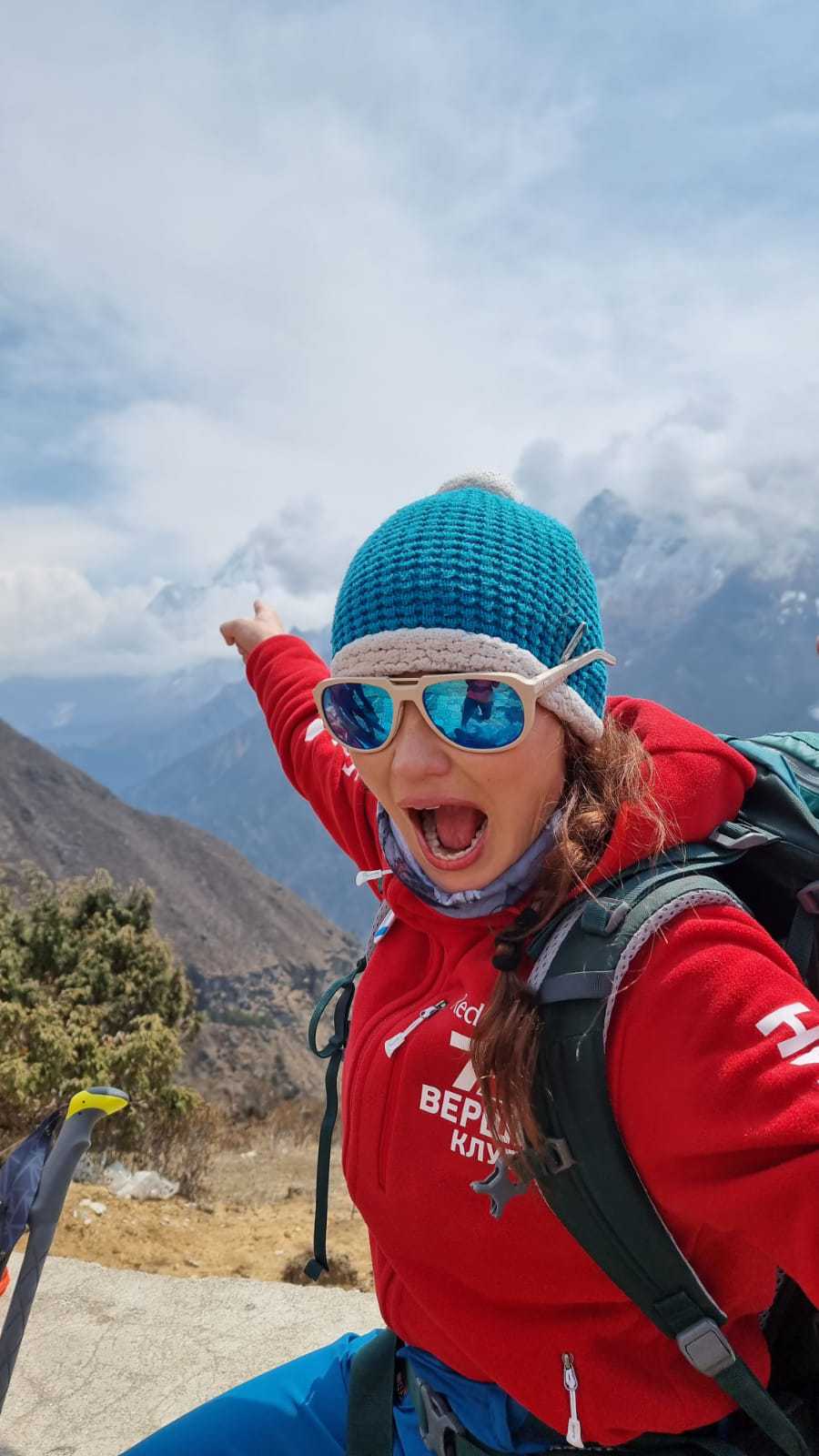 “As I progressed and climbed more, I saw there was no competition. And of course, I wanted to be the first Israeli woman to do it. I wanted the title and I wanted to show other women it is possible,” she says.

Wolfson learned the ropes from Keren and the other four men who’d reached the top of Everest: Doron Erel (1992), Gedaliah Shtirmer, Dudu Yifrah and Micha Yaniv (2006).

Wolfson packs an Israeli flag on all her expeditions and takes great pride in waving it at the completion of her climbs. 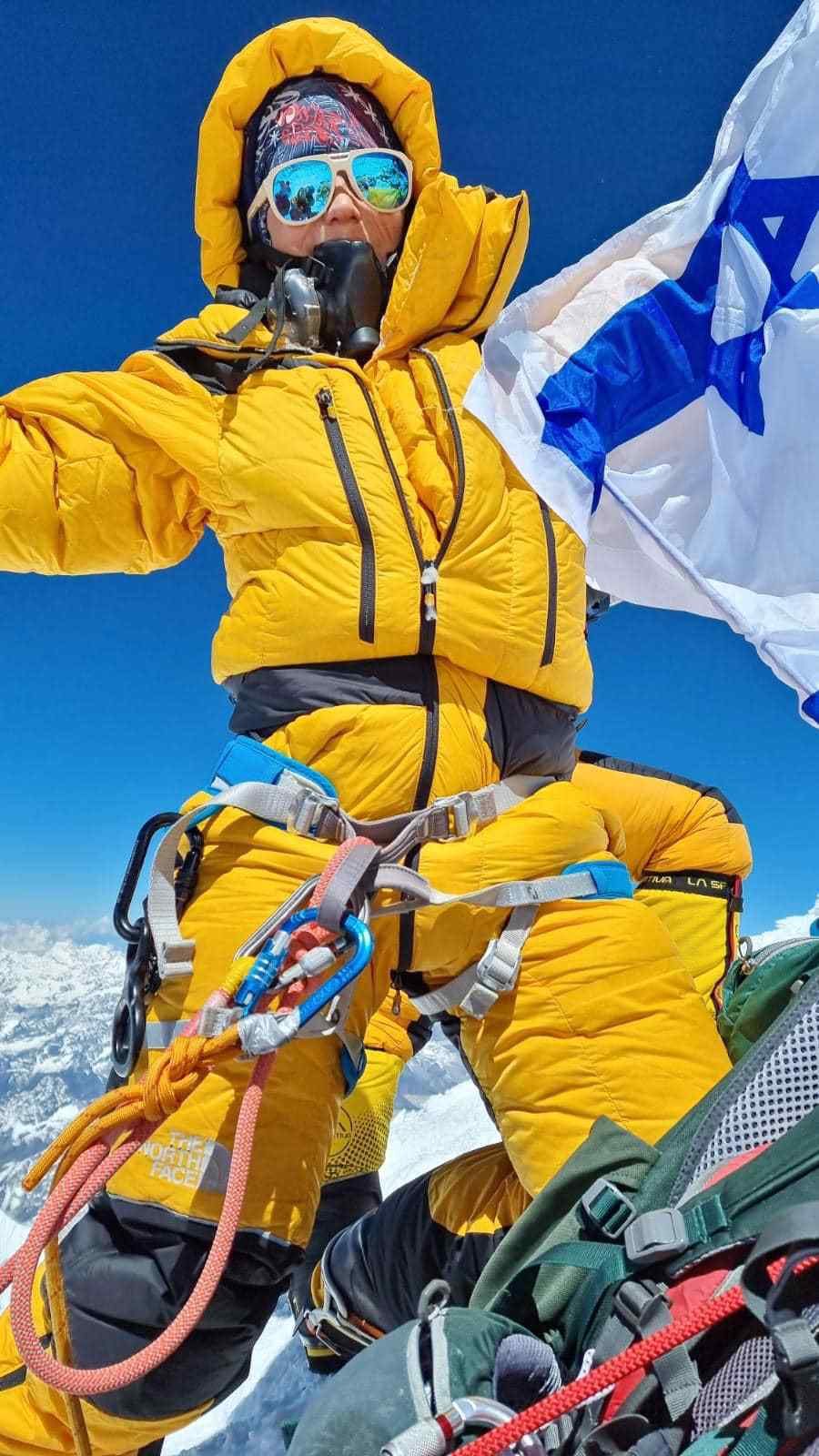 “Nobody asked me to do it. Nobody sponsors my expeditions. I am just an Israeli citizen and I love my country,” she explains.

Not having a sponsor means Wolfson shoulders considerable costs.

Aside from the expense of courses and training, an expedition to Mount Everest runs to $65,000. It’s about $15,000 just to get a climbing permit from the Nepali government.

That’s exponentially more than the price tag of other climbs Wolfson has done. Her January expedition to Chile’s Ojos del Salado, the highest volcano in the world, was a mere $4,000.

“But it’s worth it,” she says. “The highest dream of every climber is Mount Everest.”

“I am happy and proud to be the first Israeli woman to reach the summit,” Wolfson posted on Facebook following her 45-day expedition with the Seven Summits Club of Russia.

And yet Wolfson tells ISRAEL21c that she felt a profound sadness at the top. 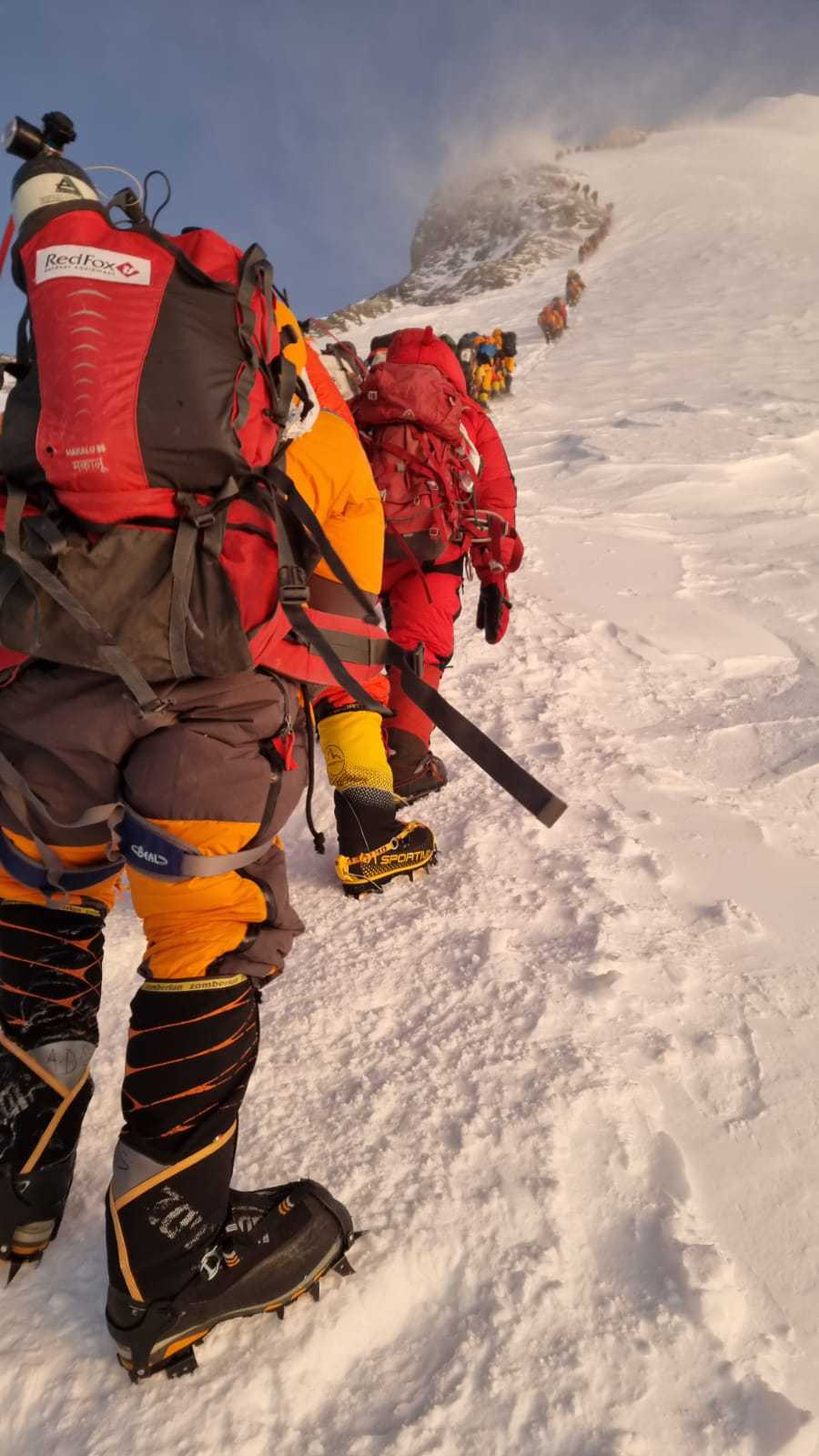 That’s because she had encountered the bodies of so many dead climbers on her way up. She’d been aware, of course, that at 50 meters from the peak she would be stepping over corpses lying frozen in their climbing gear. Experiencing it was something else.

“I was sitting on my knees on the top of the world, but I was thinking in my mind how to get down without being one more body on that mountain,” she says.

About 300 people have died while climbing Mount Everest. The bodies of about 100 mountaineers who fell at higher than 8,000 meters cannot be removed. Knowing this, Wolfson stipulated in her will that her son not expend any efforts to recover her body if she didn’t make it.

And when her oxygen was running out, she knew she could rely only on her own wits.

“After 8,000 meters you are in survivor mode, and you don’t care about anyone else. I knew nobody would help me and I wouldn’t help anybody either. I had to take care of myself,” she said. “Even if I had offered a million dollars, nobody would have given me oxygen.” 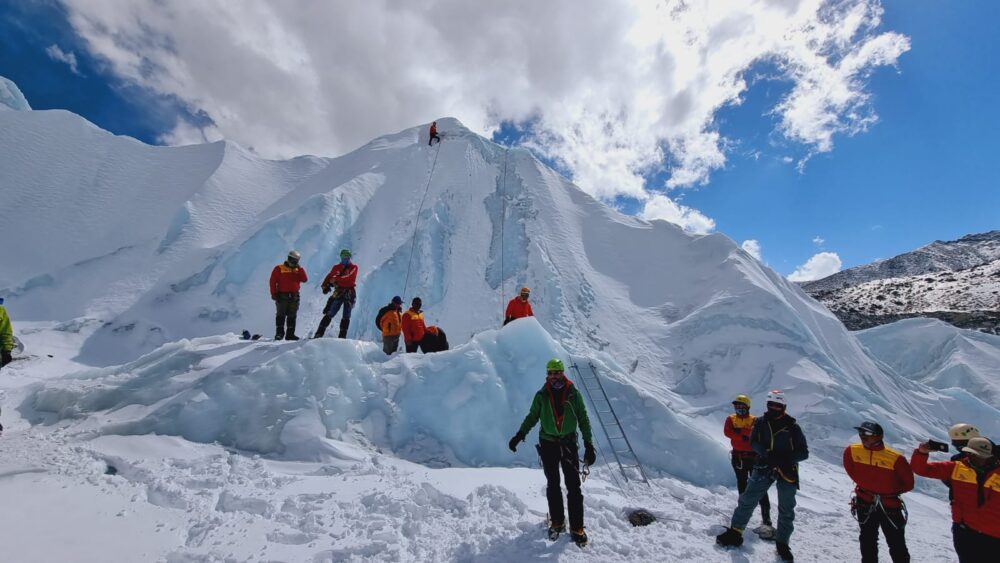 Getting close to the summit of Mount Everest. Photo by Danielle Wolfson

This phenomenon is why Israeli mountaineer Nadav Ben-Yehuda received international recognition in 2012 for giving up his own quest to save a Turkish climber lying unconscious in the snow just 300 meters from the Everest summit.

After her historic feat, Wolfson spent a week recovering in Kathmandu. 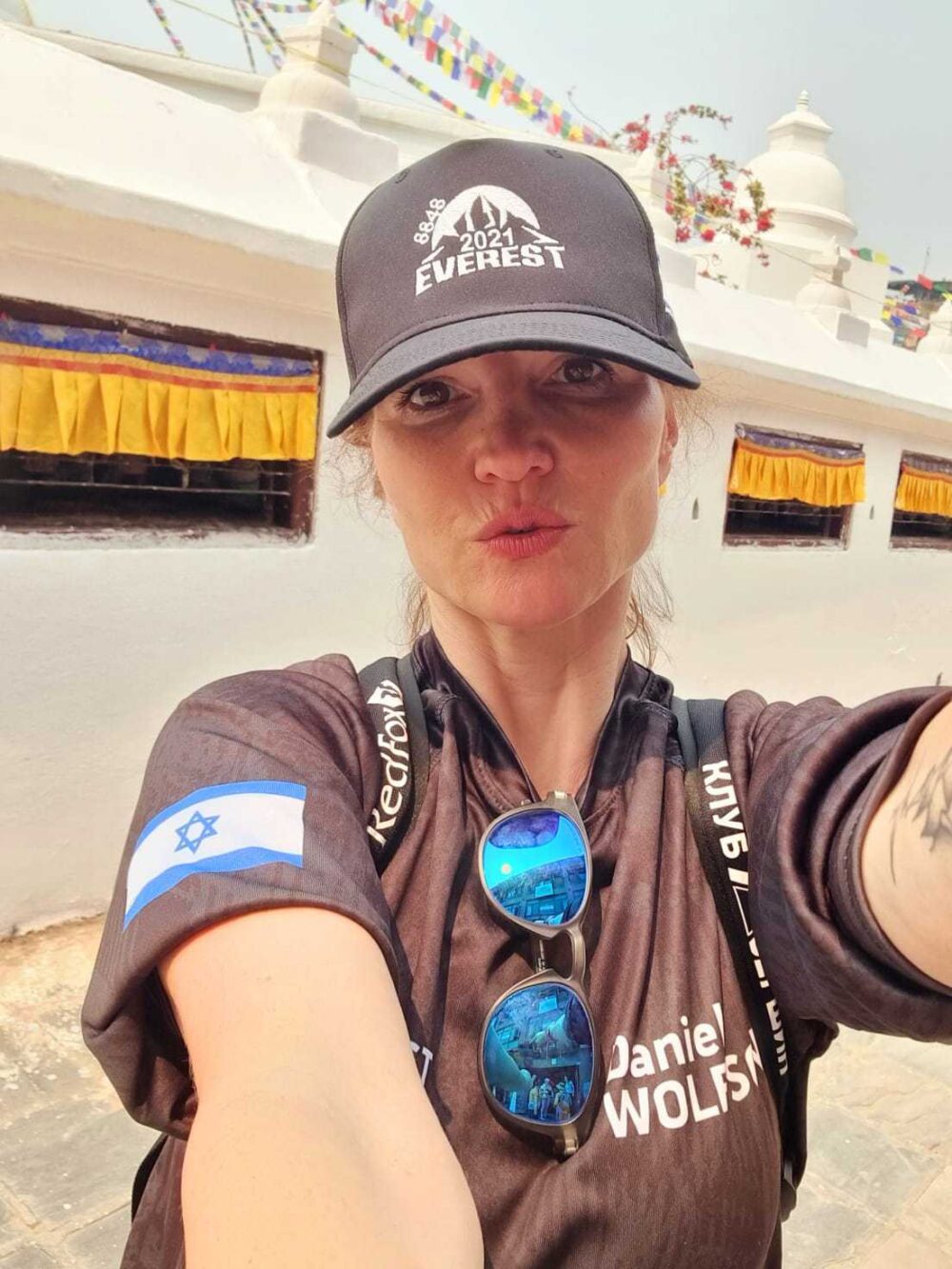 “The first day I felt very weak. I was only sleeping and eating,” she says after returning to Israel on June 4. “Now I feel good. I even took my first run on Sunday.”

She’s not done climbing. Her next big expedition is in December to Antarctica’s Vinson Massif (4,892 meters; 16,050 feet) and then she’ll cross the South Pole.

Wolfson says she keeps up with her law practice because she specializes in the regulation of online gaming and her clients are in Malta and Cyprus.

“All my work is online. It’s not easy to combine everything, but I cannot sit all day in an office,” she says. “I want also to do the things I like.”