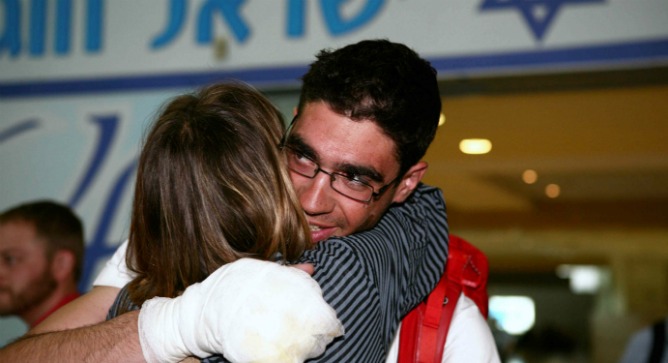 Israeli mountaineer Nadav Ben-Yehuda arrives back in Israel after the heroic rescue on Everest. Photo by Yehoshua Yosef/Flash90.

With just 300 meters to go before reaching the peak of Mount Everest, Israeli mountaineer Nadav Ben-Yehuda saw a Turkish climber lying unconscious in the snow, and in an instant gave up a lifetime’s dream to save his fellow climber’s life.

It’s a story that has warmed hearts everywhere. At a time when Israeli-Turkish relations remain strained, the incredible rescue on the world’s highest peak over a few-day period when four other climbers died has led to headlines across the world.

For publicity-shy Ben-Yehuda, who is now recovering in Tel Aviv’s Assaf Harofe Hospital and is to receive a Presidential Medal of Honor next month, the decision to save 46-year-old Aydin Irmak’s life was automatic.

Ben-Yehuda, a law student from Rehovot, has been preparing for his Everest attempt for two years. The 24-year-old, who not long ago won a stair-climbing competition at the 78-story Moshe Aviv Tower in the suburbs of Tel Aviv, had hoped to become the youngest Israeli to climb the dangerous peak.

He met Irmak, a Turk who now lives in the United States, before the ascent and the two developed a friendship.

At the time of Ben-Yehuda’s climb, more than 200 climbers were also making the ascent to Everest, trying to rush before the weather deteriorated. Ben-Yehuda set off later with a Sherpa guide in the hope of missing the worst of the bottleneck.

In the darkness, 300 meters from the top, he came across Irmak – who had already made the summit and was on his way down — lying unconscious on the ground. “He had no gloves. No oxygen. No crampons. No cover… He was waiting for the end,” Ben-Yehuda told Israel Channel 2. 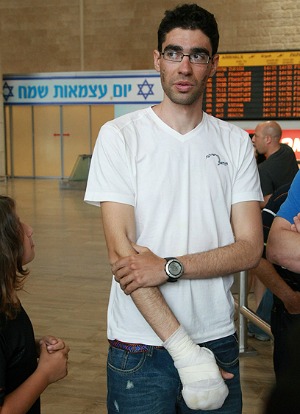 “If I had continued climbing, [Irmak] would have died for certain. Other climbers just passed him by and didn’t lift a finger, but I had no second thoughts. I knew that I had to save him,” Yedioth Ahronoth quoted Ben-Yehuda saying.

Ben-Yehuda tied Irmak to his harness and it took him a reported eight hours to carry him to the nearest camp. Both men suffered frostbite and may lose some of their fingers. Hanan Goder, Israel’s ambassador in Nepal, who hosted the two men for dinner after their ordeal, said that Ben-Yehuda lost 20 kilograms during his time on the mountain.

In a telephone interview with the Associated Press from Nepal, Ben-Yehuda attributed his decision in part to his military training in Israel. “You never leave a friend in the field,” he said.

“A person’s life, any person’s life, is more valuable than anything. I knew that I might lose my fingers, but that wasn’t something I could worry about because that would be immoral,” he told Ynet on May 28.

Missed the summit, gained a brother

Israeli climber Doron Erel, who reached the top at age 33 in 1992 and still holds the record as the youngest Israeli climber to make the ascent of Everest, agrees that his own army training also had an impact on the mountain. “My service in Sayeret Matkal [a special-forces reconnaissance unit] gave me a lot of confidence in my abilities and taught me to pay attention to the smallest details,” Erel tells ISRAEL21c.

Ben-Yehuda’s rescue has highlighted an ethical dilemma at the top of Mount Everest, where climbers often prepare for years and spend hundreds of thousands of dollars in an attempt to get to the top.

More climbers than ever are trying for the summit, and the dangers have grown exponentially as a result, with many climbers losing vital time and oxygen in logjams on the peak. While Ben-Yehuda, who had already passed the bodies of two dead climbers, immediately went to help his friend, other climbers that weekend walked on by. It’s not the first time. On one notorious weekend in 2006, about 40 climbers passed a dying British mountaineer without stopping.

“I don’t know what I would have done in Nadav’s situation,” Erel admits to ISRAEL21c. “Not every climber would do what he did. It happened to me in the past that people needed help, but I didn’t have to risk my life — I just turned around and helped them go down.”

“You have to understand that Everest isn’t exceptional in that way,” he adds. “Mountain climbing is dangerous. On Everest today there are so many people, and a lot of them do not have the right experience. If you prepare yourself for years, you will almost be sure to run into people who need help, and if you stop you won’t make it to the summit.”

Ben-Yehuda will receive the Presidential Medal of Honor at a ceremony to be held at the home of Shimon Peres in Jerusalem next month. In an interview, he said he was surprised that he would receive the award. “I’m still trying to convince them to give it up,” he said. “I heard about the people who received this medal, and I don’t think I am in the same caliber. Some of these people did amazing things.”

Ben-Yehuda is reportedly keen to make the ascent again. Irmak has announced that he would also like to repeat the climb, but this time with Ben-Yehuda. In an interview with the Jerusalem Post, Irmak said: “I don’t know what the hell is going on between the two countries. I don’t care about that. I talked to his [Ben-Yehuda’s] family today and I told them you have another family in Turkey and America.”

“I would have died on the mountain. It was a miracle…,” Irmak told Yedioth Ahranoth. “I remember falling down. I woke up with Nadav standing over me and shouting my name. Nadav did a great thing. He built a bridge between Turkey and Israel, and our leaders can learn a lot from him… I may have missed the summit, but I gained a new brother.”

UNCOVER ISRAEL - Get the ISRAEL21c
Weekly Edition free by email
Sign Up Now!
Bring Israel's story to life.
Millions of people around the world rely on us to gain a deeper understanding of Israel. We are the trusted source for original content you won't find anywhere else.
You can make a difference. Donate today to support journalism that brings Israel’s story alive.
SUPPORT ISRAEL21c
Read more on:   People, Social Action, mount everest, Nadav Ben Yehuda, mountain climbing