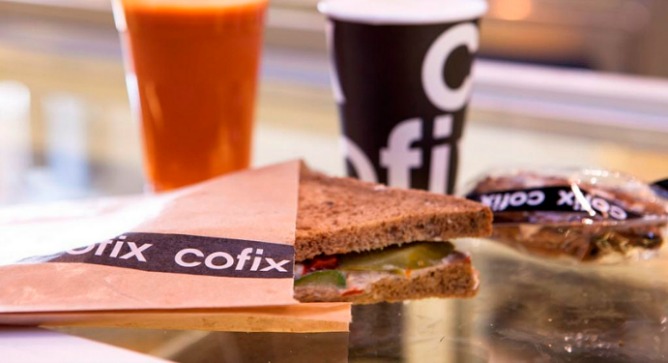 Nothing at Cofix costs more than five shekels.

Mainstream news will lead you to believe something diplomatic or political is the talk of the day in Israel. But for most Israelis the big news right now is whether a new cheap coffee chain – that recently opened in the heart of Tel Aviv – will spark a coffee revolution and bring down the prices at cafés around the country.

Entrepreneur Avi Katz – the guy who brought the “dollar store” concept to Israel – is leading the latest coffee revolution. His team opened Cofix, a take-away only café, on one of the busiest thoroughfares in Tel Aviv.

Everything on the Hebrew-English menu is five shekels (about $1.40): quality Italian coffee, cappuccino, sandwiches, bakery goods, fresh juice and desserts. A cup of coffee at a café in Israel usually runs $2.80-$5 while a sandwich costs $7-$11.

Within hours of this audacious venture opening, people were queuing out the door and down the block. The long lines continued for the next three days and Aroma, Israel’s biggest café chain has already announced that it will lower the price of cappuccino to NIS 8.

The idea for the new café chain had been brewing in Katz’s mind for 12 years. The veteran businessman tells ISRAEL21c that he will always remember the day he pulled his “new Mercedes into a gas station and went to buy coffee and a snack at the service stop. Paying over $14 for two coffees and baked goods hurts, even for someone with a new Mercedes.” 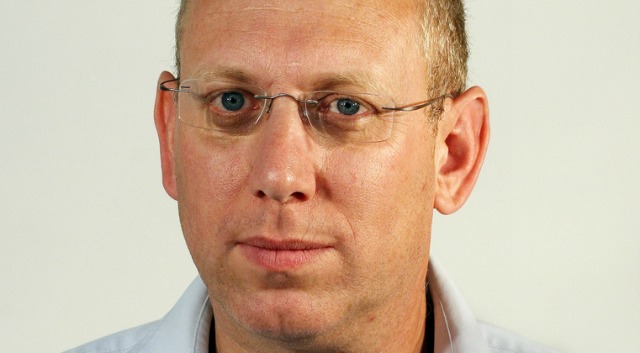 Katz – along with his daughter, Hagit Shinover; his partner in Hagshama, Benny Farkash; and attorney Hanan Shemesh – opened the first branch of Cofix on Ibn Gvirol Street and plan to keep it under their ownership for the first few years. Katz says they plan to open more branches in Tel Aviv’s downtown area in the coming months.

“After we check the market and pay the price of experience, we’ll franchise out,” he tells ISRAEL21c. Cofix’s long-term development plans cite opening 300 branches around the country.

The café market in Israel is brimming. According to a 2009 report by the Ministry of Industry, Trade and Labor, there were over 1,300 cafés peppered throughout Israel and some 120 in Tel Aviv.

Cofix is meant to sharpen the distinction between the takeaway café scene and the sit-down coffee-shop market, which Katz says has been blurred.

“It’s not about what other café owners are feeling [in response to Cofix’s opening] but rather what they’ll do,” says Katz. “There’s no reason that kiosks don’t sell coffee at our price. This is a realistic price. It still enables us to make a nice profit. Our motto is to sell more for less, not to sell a little at a high price.”

The same day that Cofix opened, in fact, two other café chains advertised $1.40 cappuccinos, albeit for a limited time offer. 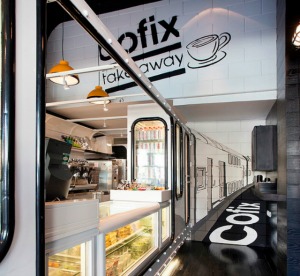 Cofix is not strictly a social venture, as Katz is very upfront about wanting to make a profit. However, the new kosher café chain does answer to the public’s desire for fair prices.

It makes sense why he would be the one to lead the coffee revolution. Eighteen years ago, Katz founded the Bee Retail Group, Israel’s largest group of retail chains for home and leisure merchandise.

He is the guy who introduced the Kfar Hashashuim toy store chain to Israel and offered more affordable prices. He also introduced the Doctor Baby chain, a store selling reasonably priced baby paraphernalia. And, of course, the dollar store enterprise was his, too.

“There’s always a social purpose to what I do,” Katz tells ISRAEL21c. “The public’s feeling that the cost of living has risen unjustly is correct. People want to see a change in food prices. Prices have fallen in fashion, computers, phones. There is no reason to pay $4 for fresh carrot juice that is made from broken carrots grocers can’t sell anyway.”

Katz says that Cofix is meant to perk up the takeaway sector but that it could – and should – also improve sit-down café options.

Coffee shops, says Katz, “should return to what they really are. Until five years ago there was a difference between what you could get in a sit-down café and fare served at a takeaway place. The owner of a sit-down café has to charge for what they offer: service, a proper meal and distinctive ambiance. I feel the menu will have to change.”

UNCOVER ISRAEL - Get the ISRAEL21c
Weekly Edition free by email
Sign Up Now!
Bring Israel's story to life.
Millions of people around the world rely on us to gain a deeper understanding of Israel. We are the trusted source for original content you won't find anywhere else.
You can make a difference. Donate today to support journalism that brings Israel’s story alive.
SUPPORT ISRAEL21c
Read more on:   Culture, Travel, coffee shop, Cofix, Israeli food and drink