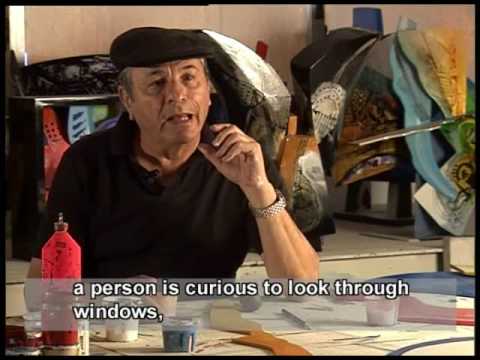 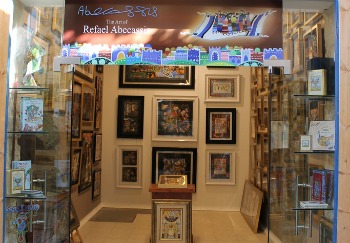 Photo by Miriam Alster/FLASH90
Colorful paintings in the alleyways of Safed.

Not so long ago, the Great Stairs of Safed (Tzfat) were used by the British Mandate government to separate the ancient home of kabbalists into Jewish and Arab sections. Today this very long staircase is a dramatic focal point in Safed’s Old City, with its expansive Artist’s Colony, historic synagogues and even a winery.

The steps make an apt metaphor for the rise of Safed’s fortunes in the past few years.

The windswept city of mystics, sitting 3,200 feet above sea level in the Upper Galilee, endured over 2,000 years through wars, pogroms, epidemics, earthquakes and poverty. Invaded by foreign forces time and again — check out the Citadel, a Crusader fortress built in the 12th century — Safed’s Jewish residents barely survived the 1948 War of Independence, with the help of their wits and the Davidka, a homemade mortar whose bark was worse than its bite.

A model of the Davidka stands in Defenders Square in the center of the Old City, which again was threatened by missiles from Lebanon in 2006.

But lately the news is only bright. Mayor Ilan Shohat has been working with the Israeli government and private investors to turn Safed into a major center for tourism and academia. The city has a brand-new medical school associated with Bar-Ilan University. And a newly declared National Heritage Site is being transformed into a living history center expected to attract 200,000 visitors every year.

Even the Artists Colony, long a favorite stop for tour buses, has more to explore these days.

“Twenty years ago, our street was empty, and now it’s full of galleries,” says Laurie Rappeport, an American émigré and owner of a local eco-guest house.

Rappeport runs a visitor information center and maintains a website listing daily and special events, licensed tour guides and an ever-increasing choices of hotels, hostels and B&Bs in Safed. 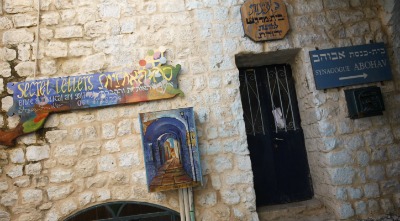 One of the Sarah’s Tent galleries.

Music is often part of the mix, especially during the annual Klezmer Festival when dozens of klezmer bands entertain in Safed’s Red Mosque and other venues. This summer will mark the 25th festival, which always includes a huge crafts fair by local vendors.

Immigrants from Montreal set up Sarah’s Tent about eight years ago, encompassing seven different galleries exhibiting and selling wearable, usable and decorative art from more than 70 artists. It’s the exclusive dealer for Avi Ben Simhon paintings in the exuberant Fauvist and Cubist tradition.

The newest addition to Sarah’s Tent is the Fig Tree Courtyard, a collection of galleries devoted to contemporary Israeli ceramics, paper-cuts, silk, oil and acrylic paintings and sculptures of metal, glass, wood and bamboo. There is even a gallery of African Jewish art in this restored old stone mansion.

And then there’s the view. “Fig Tree Courtyard offers an observation point over the whole Galilee,” says Emmanuel Bouzaglou, a partner in the Sarah’s Tent enterprise.

“The magic ingredient here is that Safed is one of the four holy cities along with Jerusalem, Hebron and Tiberius,” Bouzaglou tells ISRAEL21c. “People who spend a day or two here feel that it’s an uplifting experience. It’s a place where you don’t feel pressure, you just feel inspiration and holiness.”

For a hands-on Jewish textile art experience, visit the Cana’an Gallery next to the historic Yosef Caro Synagogue on the main street of the Old City. Co-owner Orna Mor and her staff create woven works of locally grown cotton, featuring intricate patterns and designs influenced by kabbalistic teachings and nature.

The ideas of Jewish mysticism, or kabbala, found in the second-century work The Zohar, took root and flourished when Spanish kabbalists such as Yosef Caro, Chaim Vital, Moshe Alshich, Shlomo Alkabetz, Moses Cordovero and Isaac Luria (“the Holy Ari”) established themselves in Safed in the 15th and 16th centuries. 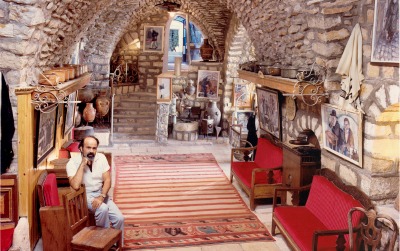 The ornately decorated synagogues of these prominent rabbis, each with its own miraculous set of stories, are perennial favorites with tourists. Mysticism also infuses much of the artwork produced here, perhaps most famously that of Shalom of Safed.

Shalom popularized the art of microcalligraphy, creating colorful images of biblical scenes out of words from sacred texts written so small they can barely be read.

Among Safed’s most notable micrographers today are Moshe Dadon, who learned the art as a boy in Morocco; Leon Azoulay, whose “Story Of Creation” is composed of the entire book of Genesis in microcalligraphy; and Moshe Yair, a seventh-generation Safed resident.

The colors of the spectrum have great significance in kabbalah, so many of the mysticism-inspired artworks by Safed painters are bursting with blues, purples and reds. New York-trained Yaakov Kaszemacher, one of the leading kabbalah artists in Safed, makes geometric constructionist paintings, double-exposure photography and other multi-image abstracts incorporating symbolic numerals.

Two good places for an overview of the art culture here are the Safed Artists Museum and the Frenel Museum.

Abstract painter Yitzhak Frenel, great-grandson of the Ba’al Shem Tov, the 18th century founder of the Hassidic movement, led a group of 1930s artists in setting up the Artists Colony in Safed. He later painted portraits of all 120 members of Israel’s first Knesset.

At Otzar HaStam you can try your hand at writing with a quill on parchment; climb aboard a multisensory, 3D “Letters of Adventure” ride; play an interactive game show to test your knowledge about Jewish ritual objects; and enjoy the view from an observation terrace overlooking the Galilee. Under construction is a garden of stone-like sculptures of the Hebrew letters, with explanations on their meaning and mystery.

Also soon to come is a 700-square-meter 16th century ruin called Kahal, under renovation for the past seven years but only recently declared a National Heritage Site. When it’s done, Kahal will be a living history lesson in the Golden Age of Safed Jewry.

No trip to Safed is complete without a stop at Safed Candles factory, gallery and shop. Not as well known, but worth a visit, are the Hungarian Museum, the Meiri House historical museum and the Rosenfeld Doll Museum.

UNCOVER ISRAEL - Get the ISRAEL21c
Weekly Edition free by email
Sign Up Now!
Bring Israel's story to life.
Millions of people around the world rely on us to gain a deeper understanding of Israel. We are the trusted source for original content you won't find anywhere else.
You can make a difference. Donate today to support journalism that brings Israel’s story alive.
SUPPORT ISRAEL21c
Read more on:   Travel, See Israel, Safed