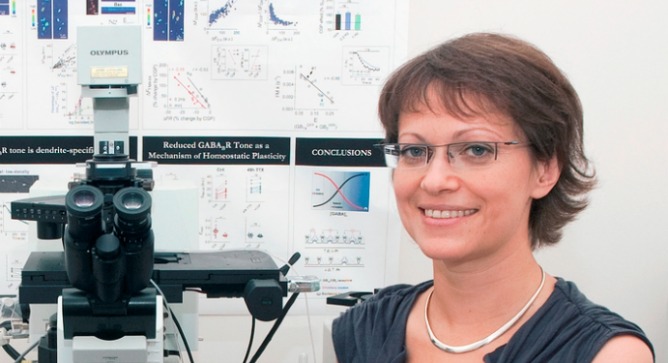 Simple, everyday activities like crossword puzzles or reading books may stave off the mind-robbing Alzheimer’s disease. Those studying and working with Alzheimer’s patients generally accept this as fact. When the mind processes challenging puzzles or new information, it makes links in the brain, possibly exercising brain synapses, the neural networks that power our brains.

Looking deeper into the brain as to what controls these synapses is a new study from Tel Aviv University.

Based on the long-suspected evidence that a build-up of amyloid-beta protein in the brain causes Alzheimer’s, which affects 5.4 million people in the United States alone, Israeli researcher Inna Slutsky has found an important missing link.

It’s not just the amount of amyloid that can create the onset of Alzheimer’s, she says, but the specific kind of amyloid protein found in the brain. An imbalance of amyloid-beta 40, compared to its counterpart amyloid-beta 42, is found in those suffering the effects of the disease.

In her research, Slutsky wanted to see if she could restore the balance between the two amyloids. She and her research associate Iftach Dolev, with student Hilla Fogel, stimulated hippocampus regions of the brain in mice with Alzheimer’s — an important area of the brain for memory and learning.

The scientists found that distinct patterns of electrical pulses, known as spikes, and the way the brain synapses filter high-frequency bursts of electricity, help regulate a healthy amyloid-beta 40/42 ratio.

Using electrical spikes, they were able to restore the balance of amyloid-beta 40 and 42 in the mice so that the proportions resembled the makeup of a healthy brain.

These artificial bursts of electricity in the brain may form the basis of a future therapy in human sufferers, the researchers theorize in an article published in Nature Neuroscience on April 7.

This is a huge advance in understanding how brain circuitry and chemistry –– apart from known genetic mutations, which makes up a small percentage of cases –– lead to Alzheimer’s.

Connecting the whole picture of how amyloid is balanced points to a brain protein called presenilin, the researchers explained.

“We hypothesize that changes in the temporal patterns of spikes in the hippocampus may trigger structural changes in the presenilin, leading to early memory impairments in people with sporadic Alzheimer’s,” says Slutsky.

Over time, environmental effects and human experiences may be affecting the spiking patterns in the brain, which is in line with theories that stimulating environments could prevent the onset of this debilitating disease.

According to the researchers, sensory experiences alone could also increase amyloid-beta 40 in the brain.

Weighing in on the advance

Slutsky showed how electric stimulation can manipulate the synthesis rate of this molecule, by stimulating the neurons that make this substance.

“Theoretically we could develop drugs that would mimic the effects of the electrical stimulations. This is far in the future, though,” says Korczyn.

“For now, this study has been done on animals, and it’s been done over a short term. So we would need to see what extent this effect would have when it’s applied to humans and treatments over several months.

“Unlike crude electroshock treatments used in schizophrenia, we are talking about a very delicate, gentle and highly focused electrical stimulation,” he points out.

In the future, Slutsky and her team hope to be able to apply the firing patterns found in healthy hippocampus brain pathways to prevent the onset of Alzheimer’s.

This, they say, would be a step in monitoring and diagnosing the disease as it progresses.

UNCOVER ISRAEL - Get the ISRAEL21c
Weekly Edition free by email
Sign Up Now!
Bring Israel's story to life.
Millions of people around the world rely on us to gain a deeper understanding of Israel. We are the trusted source for original content you won't find anywhere else.
You can make a difference. Donate today to support journalism that brings Israel’s story alive.
SUPPORT ISRAEL21c
Read more on:   Health, Research, Alzheimer's Disease, frustration