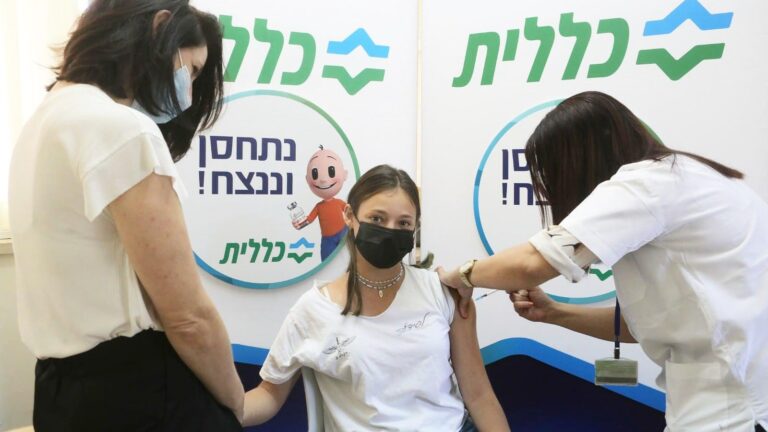 Israel is taking precautions against another wave of coronavirus as cases of the Delta variant of Covid-19 have been rising slowly, half of them among schoolchildren.

In addition to reinstituting the requirement to wear facemasks in indoor public spaces, the government has been encouraging parents of Israel’s approximately 570,000 12- to 15-year-olds to get them vaccinated.

“Last week we called on young people aged 12-16 to go get vaccinated and I am pleased to announce that 100,000 young people of these ages have already been inoculated with the first injection,” said Prime Minister Naftali Bennett on July 4. “The daily pace for young people jumped six-fold in a week.”

His own 14-year-old daughter, Michal, received her first dose on June 29.

Bennett noted that the full course of two doses is needed to protect against the Delta variant, but there are only five days left for people to receive the first dose so that they can get the second dose three weeks later, before the existing vaccine stock expires.

In April, many public-health officials believed Israel had reached, or was about to reach, herd immunity, with 56% of citizens vaccinated and another 15% recovered.

On July 2, computational biologist Prof. Eran Segal of Israel’s Weizmann Institute of Science tweeted: “To regain herd immunity, we need to vaccinate as many of the 1.2 million over the age of 12 who have not yet been vaccinated. Yes, it’s that simple.”

It does seem that the vaccine is keeping those who catch the Delta variant from becoming seriously ill.

Research released over the weekend by Hebrew University physicists and epidemiologist Ronit Calderon-Margalit suggests that while the Pfizer-BioNTech vaccine is only about 60-80 percent effective against the Delta variant identified in India in April, most infected people have had mild symptoms. As of July 4, there were just 35 serious cases reported by Israeli hospitals.

The government has tightened rules preventing Israelis from flying to “red” countries with high Covid rates, and is building more testing stations to handle incoming passengers.

Even with the Delta variant, case numbers still are low. Compared to March 3, when Israel saw more than 4,000 new Covid-19 diagnoses, only 277 were reported on July 3.

However, if Israelis do not wear masks and take other precautions, the Hebrew University report warned, “it will be difficult to prevent reaching about 1,000 daily infections within about two weeks.”

And while Israeli hospitals reported no cases of flu in the winter — likely due to mask-wearing and lockdowns — they’re now seeing a surge of viral respiratory infections uncommon in warmer weather. These aren’t caused by the coronavirus but by RSV (respiratory syncytial virus), adenovirus, rhinovirus and human metapneumovirus (HMPV).

UNCOVER ISRAEL - Get the ISRAEL21c
Weekly Edition free by email
Sign Up Now!
Bring Israel's story to life.
Millions of people around the world rely on us to gain a deeper understanding of Israel. We are the trusted source for original content you won't find anywhere else.
You can make a difference. Donate today to support journalism that brings Israel’s story alive.
SUPPORT ISRAEL21c
Read more on:   News, COVID-19, Health, Covid-19 vaccine