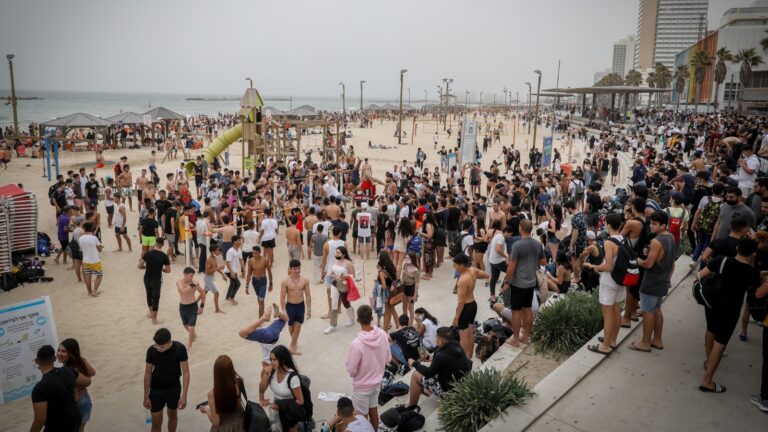 Israelis are returning to public places – like this beach in Tel Aviv -- after more than half the population is vaccinated. Photo by Noam Revkin Fenton/Flash90

Israel may have reached herd immunity against the SARS-CoV-2 coronavirus, say experts from its largest hospital, Sheba Medical Center.

Herd immunity happens when a sufficient percentage of a population has immunity – through vaccination or having recovered from the disease — and gives indirect protection to those who aren’t immune.

The immunity level needed for herd immunity is calculated based on the transmission rate of the virus. For SARS-CoV-2 it’s estimated at 65-70 percent, says Dr. Eyal Leshem, director of Sheba’s Institute for Travel & Tropical Medicine.

Approximately 56% of Israel’s 9.2 million citizens are vaccinated and another 15% (approximately 700,000 people) recovered from Covid-19, putting Israel comfortably in the expected herd immunity range.

“We’re seeing a decline in the number of cases now despite the return to mass gatherings and schools following the third lockdown, because most of the people the infected person will meet are immune by now,” Leshem tells ISRAEL21c.

“Compared with the last two lockdowns, after which we saw an increase in cases, we see a decline even after lockdown.”

Currently, Israel’s borders are closed to non-citizens except for first-degree relatives of citizens.

When general tourism resumes, says Leshem, “Israel is expected to be a very safe place for travelers because of our lower risk of transmission. The CDC and other public health agencies think that for fully vaccinated people travel is a very low risk especially if they have a PCR test before boarding the plane.”

He says that resuming travel with precautions is “a reasonable risk-benefit balance, provided people are vaccinated or get tested before and after travel and maintain quarantine.”

Leshem says the real challenge is children and adults who are unvaccinated. The vaccine has only been given to people 16 and older. Vaccinations in the 12- to 15 age range are to begin in a few months in Israel, following Pfizer clinical studies in that population.

“There are no magic tricks here,” says Leshem. “If unvaccinated people travel without full quarantine and testing, we will increase the risk of reintroducing the disease to Israel.”