An Israeli-Arab nurse who saved the life of an Israeli Jew who was being lynched by an Arab mob, met in an emotional reunion at the Galilee Medical Center in Nahariya yesterday.

Fadi Kasem, a nurse in the Internal Medicine Department at the Galilee Medical Center, saved the life of Mor Janashvili, on May 12, when rioting broke out in Acre (Akko).

The two reunited one week later on the surgical ward of the medical center in Haifa where Janashvili was still a patient. They hugged and spoke about their experiences. 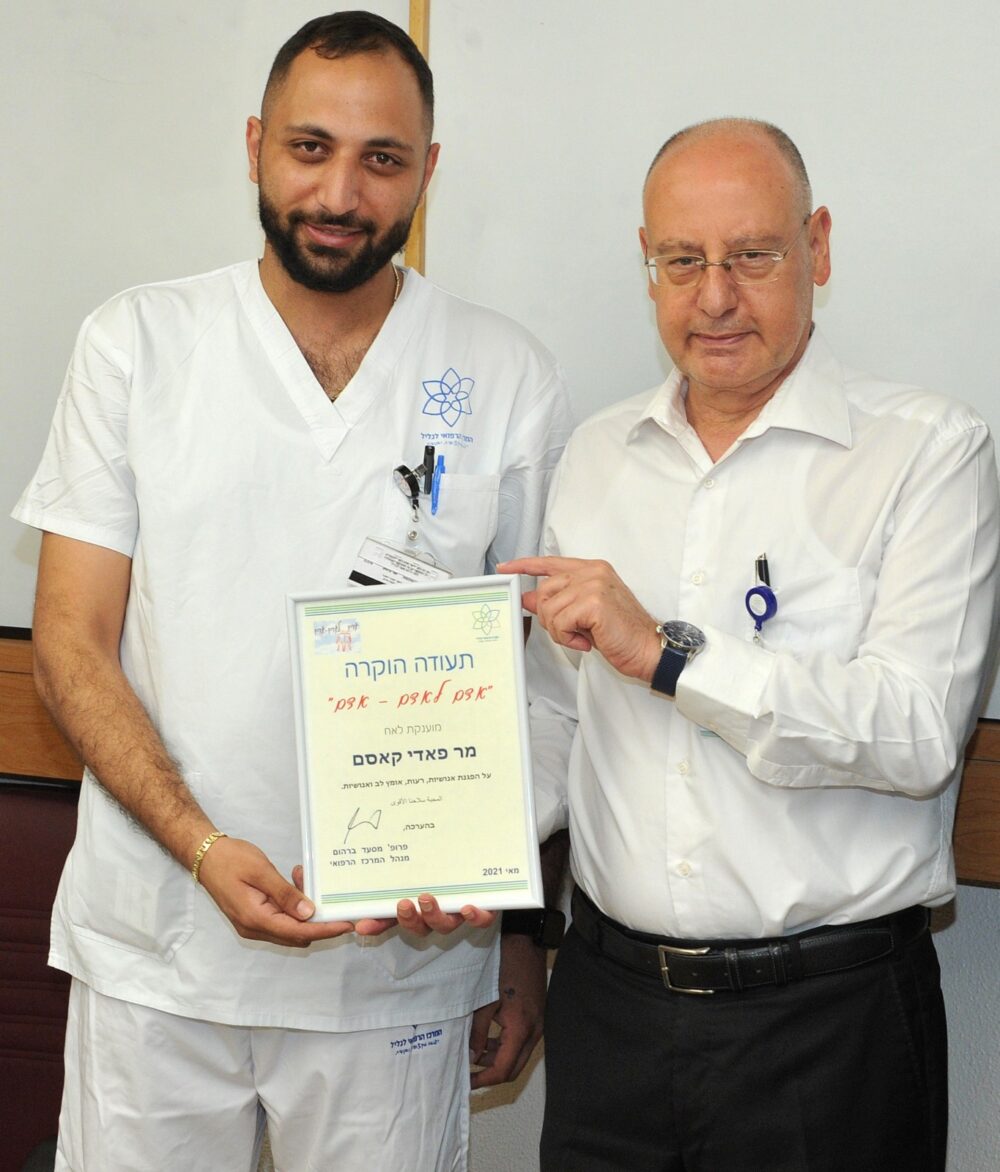 “You saved my life. I do not know what I would have done without you,” Janashvili told Kasem.

Galilee Medical Center Director General Prof. Masad Barhoum, also an Israeli-Arab, presented a certificate of appreciation to Kasem, emphasizing that his behavior and values demonstrated the medical center’s guiding principle, “a person is a person to a person,” which means providing professional and compassionate medical care to all, regardless of religion, race or gender.

The attack happened when Janashvili was driving to his mother’s home in the Wolfson neighborhood of Akko and was set upon by a mob of Arabs with sticks, stones and knives.

The mob continued to assault him as he got out of his car and tried to escape on foot.

Kasem, 28, arrived at the scene with a sheikh from Akko, and several other Arab residents from the neighborhood, hoping to calm the situation.

“As soon as we arrived, I saw [Janashvili] lying on the floor. The only thing that stood before my eyes was to save him. I didn’t think about whether he was Jewish or Arab,” says Kasem.

Kasem shielded Janashvili with his body to protect him, washed his face and tried to keep the rioters at bay. He also began bandaging his wounds using his own first aid kit.

Mor lost consciousness for a few minutes, and when he came round did not understand what had happened.

“I told him he been in a car accident because I wanted him to try to be calm and not get into a big emotional state,” says Kasem. Mor’s mother who arrived at the scene, fainted when she saw her injured son.

At the meeting a week after the incident, Kasem told Janashvili: “I did what I needed to. I was not alone. There was also other people who helped you.”

Kasem also encouraged Janashvili, who is to be released from hospital soon, to stay positive.

“Even in 2008, when there were severe riots in Acre, people did not believe coexistence would return, and everything went back to normal. Overall, most Acre residents are good and sane people, who advocate for coexistence,” he said.

“I do not care about religion or skin color, we are all human beings,” Kasem added.

The two men vowed to stay in touch. “We are like a family,” Kasem said. “My home is your home.”

This is not the first time during this period of conflict that an Arab Israeli has stepped in to save the life of a Jewish resident.

Last Friday, we reported on Dr. Muhammad Awad, a Muslim doctor from Bnei Zion Medical Center in Haifa, who was injured when he went in to help save a Jewish man stabbed in the neck during a riot in Tamra, in the Galilee.