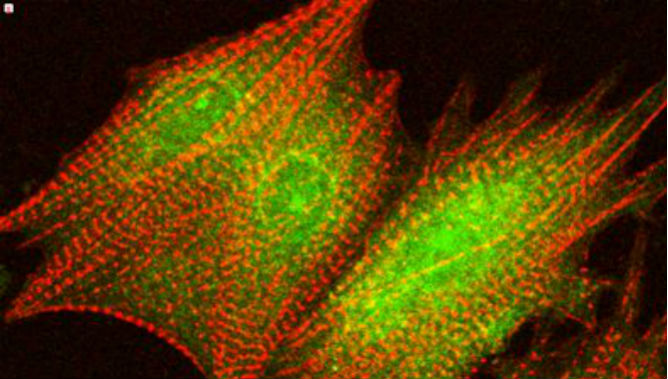 This could mean that heart disease might someday be repaired by using cells from a person’s own body, eliminating the need for risky surgical implants and transplants.

The news is causing a media sensation around the globe.

“The good thing about it is that the research has increased public awareness to science that Israel isn’t only portrayed with hostility, but that it’s a country bringing good news for the world,” Prof. Lior Gepstein, head researcher in the advance, tells ISRAEL21c.

A decade from clinical trials

It will take five to 10 years before this basic science can get to the point of clinical trials, Gepstein emphasizes. People with advanced heart disease today might never benefit from the research, published in the current issue of the European Heart Journal. The advance is more likely to be applicable to people who are now 30 years old and younger.

Still, the breakthrough is monumental.

“What is new and exciting about our research is that we have shown that it’s possible to take skin cells from an elderly patient with advanced heart failure and end up with his own beating cells in a laboratory dish that are healthy and young — the equivalent to the stage of his heart cells when he was just born,” says Gepstein.

Skin cells from patients aged 51 and 61 were transformed into healthy heart muscle cells by adding to the cell nucleus three genes and valpoic acid, a small molecule. Gepstein’s team avoided a transcription factor typically used in creating stem cells because it’s thought to cause cells to develop out of control and become tumors.

The new heart muscle cells, cardiomyocytes, grew in a lab dish with existing heart tissues, and within 24 to 48 hours both kinds of tissue were beating together as one.

“The tissue was behaving like a tiny microscopic cardiac tissue composed of approximately 1,000 cells in each beating area.”

This culture was then implanted into the hearts of healthy rats, where it connected well to the existing cardiac muscle.

An empire of stem-cell research

Over the last decade, Israel has created what Gepstein calls an “empire” in stem-cell research, with nodes of highly focused research taking place at the country’s best research institutes. He focuses on the heart, but there are labs concentrating on diabetes, Parkinson’s disease or on repairing nerve damage.

Israeli scientists today use pluripotent stem cells, which come from skin or blood samples. Cultivating stem cells this way circumvents ethical considerations of embryonic stem-cell research, and also guarantees that patients wouldn’t need to take anti-rejection drugs for the rest of their lives, since the progenitor cells originate from the patients’ own bodies.

The early pioneering work, such as that of Benjamin Rubinoff at Hadassah University Medical Center in Jerusalem, was done with embryonic stem cells. Of the world’s first 10 scientific papers dealing with human embryonic stem cells, nearly all were authored in Israel.

Gepstein explains that Israel never faced the ethical challenges in embryonic stem-cell research that plague most US states. That’s because in Jewish law, an embryo is not considered human until 40 days after conception. Using younger embryos therefore doesn’t raise ethical problems, and Israel was free to move ahead in the field.
Today, Israelis excel at maintaining pluripotent stem-cell cultures, growing them and coaxing them into new cell types, Gepstein says.

UNCOVER ISRAEL - Get the ISRAEL21c
Weekly Edition free by email
Sign Up Now!
Bring Israel's story to life.
Millions of people around the world rely on us to gain a deeper understanding of Israel. We are the trusted source for original content you won't find anywhere else.
You can make a difference. Donate today to support journalism that brings Israel’s story alive.
SUPPORT ISRAEL21c
Read more on:   Health, Research, heart disease, Stem Cells