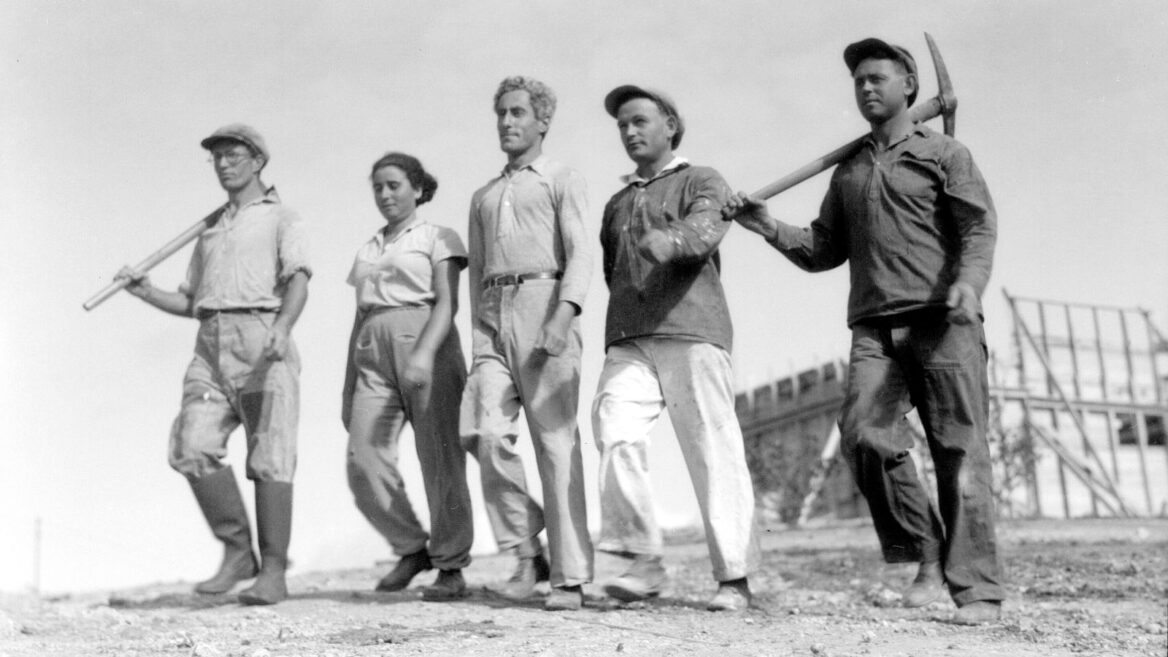 Young people on their way to work in the fields in pre-state Israel, 1939. Photo by Kluger Zoltan/GPO

As Israel made headlines across the world in recent weeks, we at ISRAEL21c noticed people’s growing interest in understanding how things got to where they are, the ins and outs of the country’s history and the matters that influence public opinion.

We therefore put together a list of recommended books that tackle multiple facets of Israel’s fascinating history, ranging from the Holocaust and wars and battles to the most famous city on the planet and breakthrough innovation. Enjoy.

Authored by none other than the late Shimon Peres, one of Israel’s legendary presidents, No Room for Small Dreams gives a detailed account of the decisions and events that shaped the country. As a statesman involved in the machinations of the state from the very beginning,

Peres was uniquely positioned to give an insider view of the way Israel became what it is, discussing topics such the country’s nuclear power, the famous Operation Entebbe and the establishment of Start-Up Nation. Fans of the book include former US Presidents Barack Obama, Bill Clinton and George H. W. Bush.

Israeli analyst and author Daniel Gordis’ book does what it says on the cover: offering a concise, brief and accessible view of Israel that at the same time also manages to be thorough and intense.

A great read for anyone interested in the history of Zionism and the makings of the Israeli state. The author’s passion of the country resonates throughout.

Israeli actress, producer and public speaker Noa Tishby recently wrote a guide to Israeli history that is intertwined with her history as well as that of her family.

The result is a fun and funny book that doesn’t skimp on hard facts, difficult questions and hot-button issues, all served in a personal, easy-to-read style. A great choice for those wanting to read up without feeling like they’re in history class.

Speaking of history class, this detailed research by prominent British historian Martin Gilbert is a must-read classic. Gilbert starts his history at the beginning of the 20th century, when political Zionism began making waves, and ends it at the first intifada in the 1990s.

In between, he examines events such as Israel’s 1948 War of Independence, mass immigration to the country, the growth the country experienced in the 1960s and the effects of the 1973 Yom Kippur War, all in great and nuanced detail.

British historian Simon Sebag Montefiore’s ambitious biography of Jerusalem is a most comprehensive account of the most famous city in the world: right back from the times of King David and all the way up to the Six-Day War.

He interviewed everyone from historians, archeologists and proud Jerusalemites of all sectors to the Duke of Edinburgh and the Prince of Wales. The result is an impressive and engaging work that resonates a long time after reading.

Donna Rosenthal’s book on the way in which Israelis view themselves and their country has become a classic for anyone trying to understand the often crazy, difficult and clashing realities permeating the land.

She interviewed Jewish, Muslim and Christian Israelis from all walks of life, giving a real sneak peek at communities and issues that don’t often make the headlines but which are newsworthy in their own right.

The first fiction entry on this list, Beaufort is a bestselling, award-winning novel about a group of soldiers stationed in the Beaufort post in southern Lebanon before Israel’s withdrawal from the region in 2000.

The book, which depicts the troubles, dangers and friendships that made up the world of those stationed on the isolated mountaintop, was later made into an Oscar-nominated film by director Joseph Cedar. As such, it gave its many readers and viewers a glimpse at the complicated, sad and poignant aspects of Israel’s military history, and is an absolute must read.

Perhaps the most famous book on this list, Start-Up Nation addresses the ever-relevant question of how on earth Israel became the entrepreneurial hot spot that it is.

Authors Dan Senor and Saul Singer explore themes such as persistence, order, chaos, immigration and opportunity, giving a well-rounded view of the way Israel pulled itself upward into the high-tech stratosphere.

The two have another book coming out later this year, The Genius of Israel: What One Small Nation Can Teach the World, and chances are it will be just as successful.

It’s a simple truth that no history or understanding of Israel is complete without the Holocaust. Israeli historian Tom Segev’s book deals with the tricky history of the Holocaust as viewed from pre-state Israel and the effects of the Holocaust on the country’s establishment, character and people.

While the book is not free of controversy, and is most definitely not a leisurely read, it is fascinating and thought-provoking and provides yet another important angle on Israel’s history.

This award-winning book (by the same name as Martin Gilbert’s) was penned by Anita Shapira, one of Israel’s most prominent historians. Shapira examines the emergence of political Zionism in the late 19th century, immigration to Israel and the wars, political events and cultural shifts that brought the country to where it is today.

Her research is based on extensive archival work, and gives a detailed, thorough and nuanced explanation of Israel through the ages.

Instead of spanning centuries, Larry Collins and Dominique Lapierre’s book focuses on the space of a little less than two years, when the city became a battleground during the War of Independence.

The two give a multi-dimensional view of the events that shook the city and the people who determined its fate, combining small, personal incidents with larger military and political events that together give a detailed and fascinating account of that time.

Continuing with Jerusalem and 1948, Yoram Kaniuk’s novel 1948 is heart-wrenching account of his military service as a teenage boy in the city. One of Israel’s most celebrated authors, Kaniuk tries to remember what happened to him and his friends in the frenzy and desperation of war, all while noting the blurred lines between reality, memory and oblivion.

While not a history book per se, it nonetheless gives a detailed real-life account of what life was like for the first Israelis and, indirectly, the war’s effects on the country from then on after.

UNCOVER ISRAEL - Get the ISRAEL21c
Weekly Edition free by email
Sign Up Now!
Bring Israel's story to life.
Millions of people around the world rely on us to gain a deeper understanding of Israel. We are the trusted source for original content you won't find anywhere else.
You can make a difference. Donate today to support journalism that brings Israel’s story alive.
SUPPORT ISRAEL21c
Read more on:   Culture, books about Israel, history, History of Israel, Israel history