The Golan Heights ascends from the Sea of Galilee to Mount Hermon and the northeast border of Israel. The area is hilly, scattered with rocks and brush, sometimes sparse, always tranquil, filled with striking landscapes and places to visit.

From north to south, it’s about 40 miles; and from east to west, about 12 miles, with a lot of beauty in between.

Here are 10 terrific things to do (just a few out of many) in the spectacularly beautiful Golan Heights. 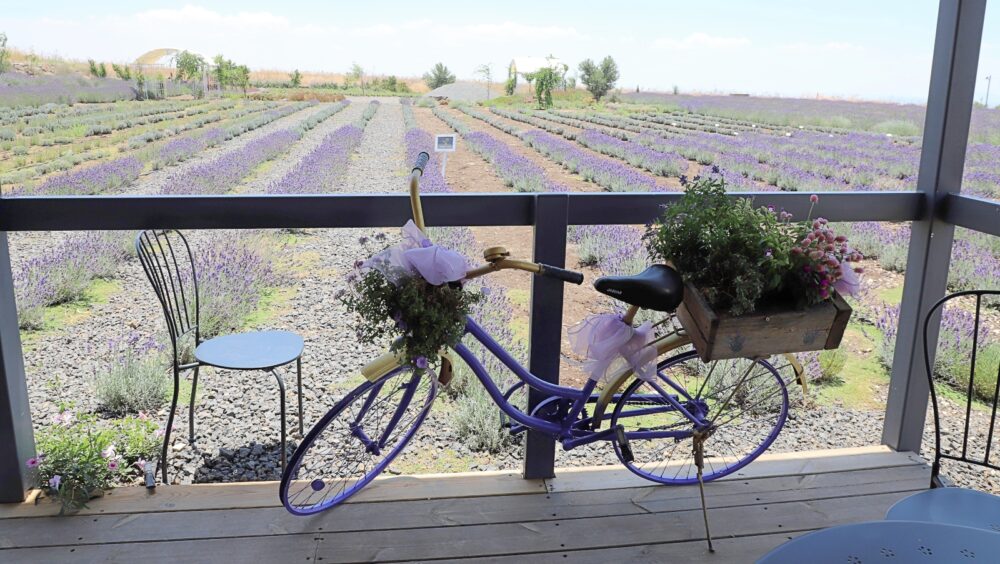 The purple lavender fields of Azizo farm in Moshav Kanaf in the southern Golan are in bloom from March through July.

Daniel Assraf began Azizo in 1987 and is still enthusiastically greeting visitors and giving talks about how lavender grows. The gift shop sells lavender oils, soaps and scent bags, along with purple baskets and accessories.

Farther north is Ruth Sdot Aromatic Plants Farm in Ein Zivan, which sells lavender wreaths, creams and other products made from aromatic plants.

Ein Zivan hosts a farmer’s market every two Fridays in the village square from 9-2. All the delicacies are from the Golan, incuding honey, olive oil, cheeses, Druze dishes, flowers and handicrafts. 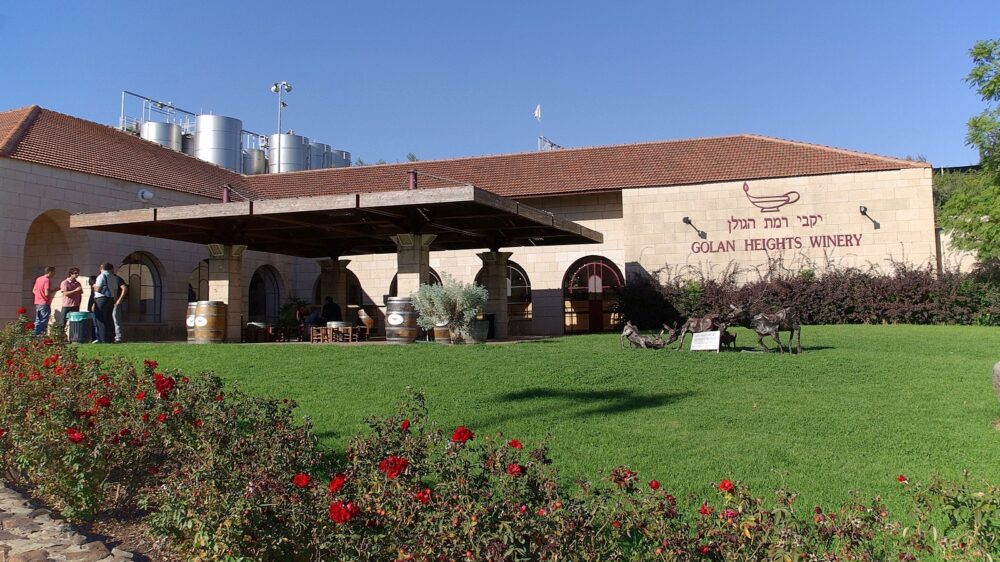 With its high altitude, climate and deep basalt soil rich in clay, the Golan now boasts about 18 wineries of various sizes. 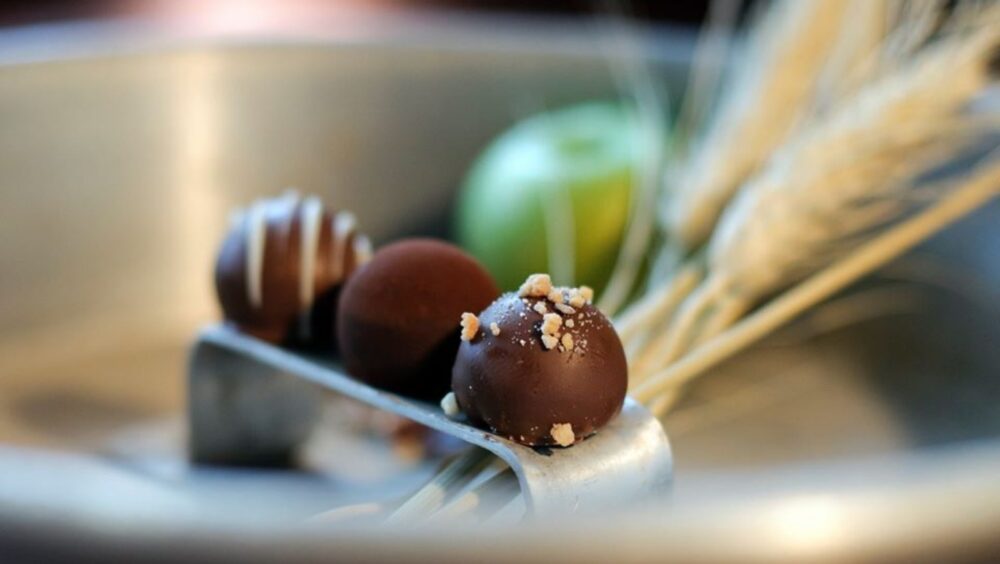 If you have a sweet tooth, visit the De Karina Chocolate Factory in Ein Zivan, established by gourmet chocolatier Karina Chaplinski. She moved to Israel from Argentina in 2003, bringing along her family’s chocolate-making tradition. Visitors can learn how to make chocolates as well as indulge in a few extra calories. 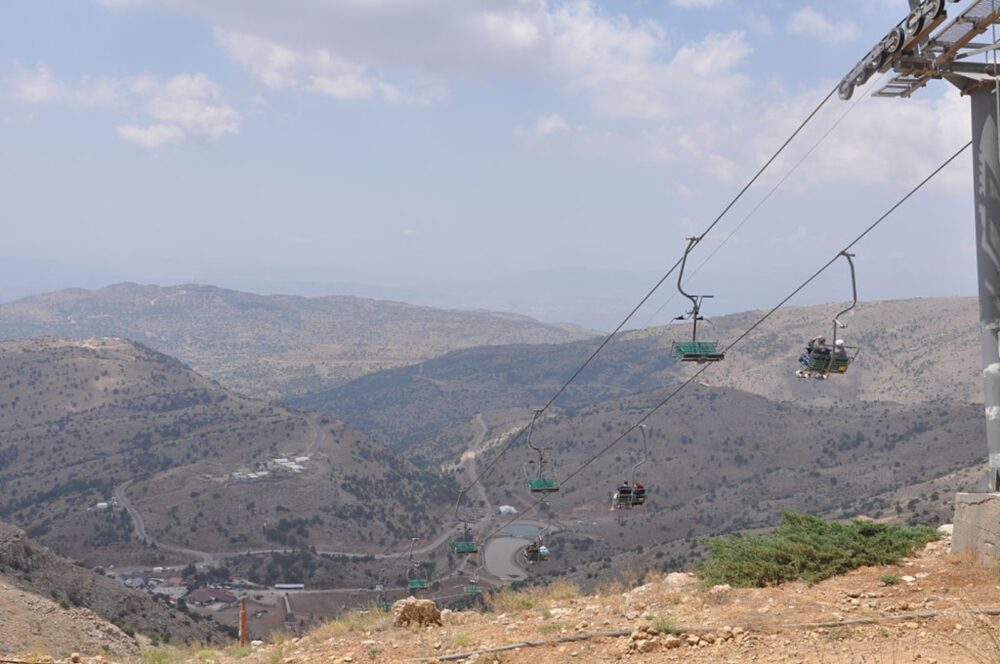 Even when the snow has melted off Mount Hermon, the chairlift still whisks visitors up to the top of the mountain at 2,236 meters (7,336 feet) where there is a view of Lebanon, the Galilee, Syria and the Hula Valley.

There are numerous trails where you can spot flowers and fauna such as buzzards, larks and other birds.

You can also hike up to Nimrod’s Fortress, which Mark Twain called “the most glorious ruins mound of its kind in the world.” The fortress was constructed during the 13th century to defend against the Crusaders. Israel’s Nature and Parks Authority recommends making reservations in advance. 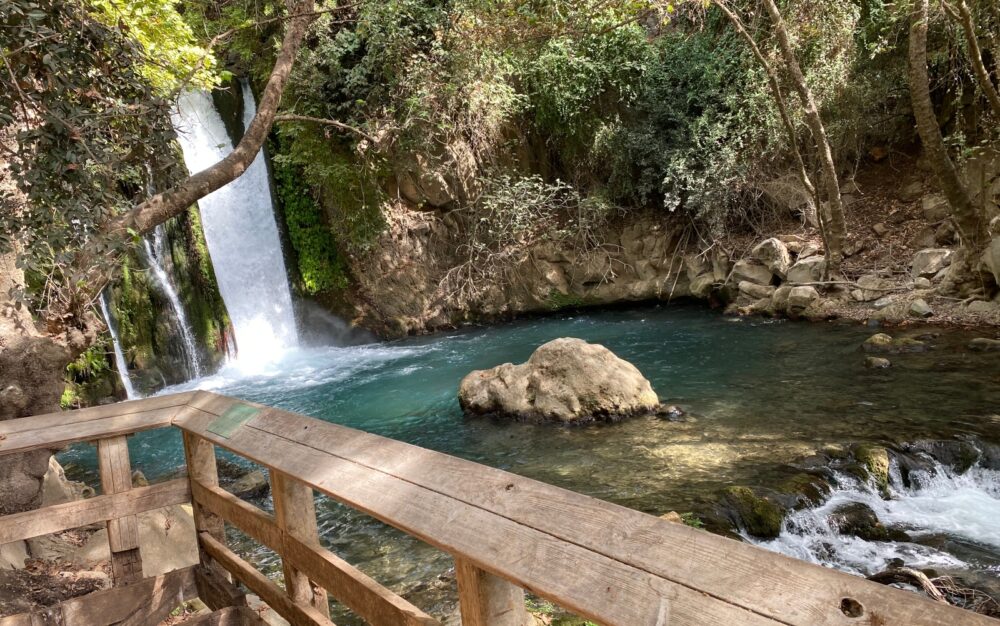 Cool off at the highest waterfalls in Israel: Gamla and Banias.

Gamla measures 51 meters (167 feet) and flows all year round. An easy path leads to the lookout terrace, from which the waterfall can be seen in all its glory.

The 10-meter (33-foot) waterfall in the Banias Nature Reserve is in the Upper Golan, between the Hula Valley and Mount Hermon. There are four marked trails, a wooden boardwalk and a hanging trail that runs for 100 meters along the stream. 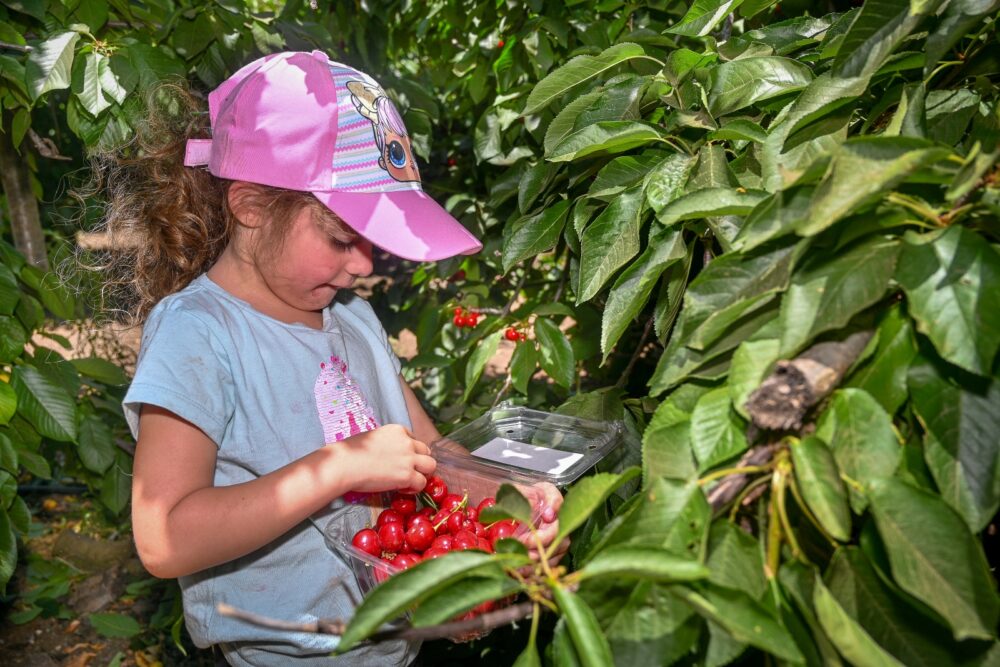 While you’re there, venture into Odem Forest, the largest nature reserve in the Golan Heights. 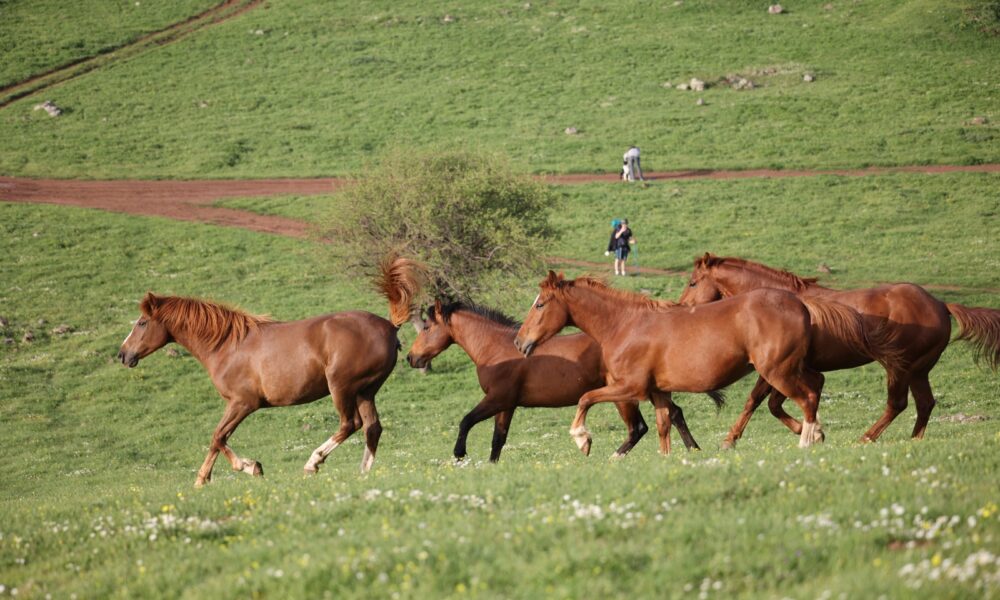 Horses on the trail from the northern Druze village of Majdal Shams. Photo by Maor Kinsbursky/FLASH90

Majdal Shams on the slope of Mount Hermon is one of four Druze villages in the Golan Heights. Visitors can stop at the Why Bar and sit outside on the deck with a drink.

If you want to try home-cooked Druze meals, stop at Al Yasmeen Restaurant in a 19th century stone building. You can dine outside in the garden on the specialties of the chef, Su’ad al-Sha’ar, who shares her homecooked dishes including sambusak, kubbeh and okra in season. There is no menu; al-Sha’ar’s children explain that they serve “whatever Mom makes.” Information: 050-217-4291.

Along the road to and from Majdal Shams are makeshift stalls where locals sell square-shaped Druze pita with homemade labeneh, olive oil and zaatar, and local apples. 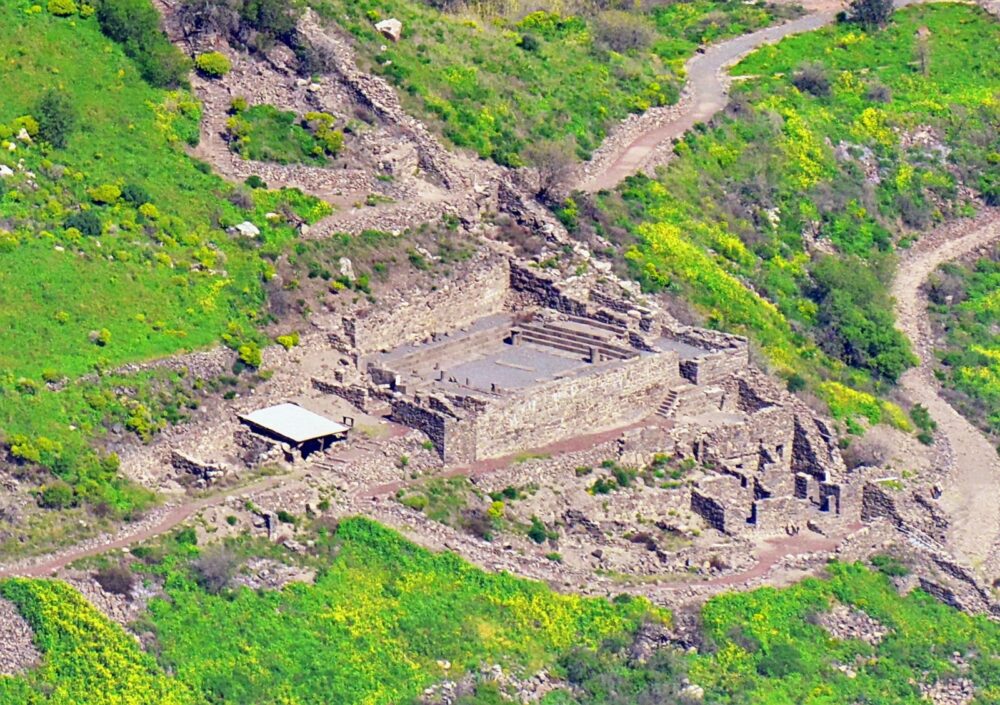 Ruins of the ancient synagogue at Gamla. Photo via Wikimedia Commons

The ancient city of Gamla takes visitors back to 66 CE and the start of the Great Revolt of the Jews against Rome, which ended with the destruction of the Second Temple in 70 CE. At the archeological site, you can see Gamla’s ancient synagogue, ritual baths and oil press.

The ruins, which were discovered in the 1970s, are part of the Yehudiya Forest Nature Reserve. There are huge stones that were used for burial mounds as well as an eagle preserve and many marked trails, including one that leads to Gamla Falls (see above). 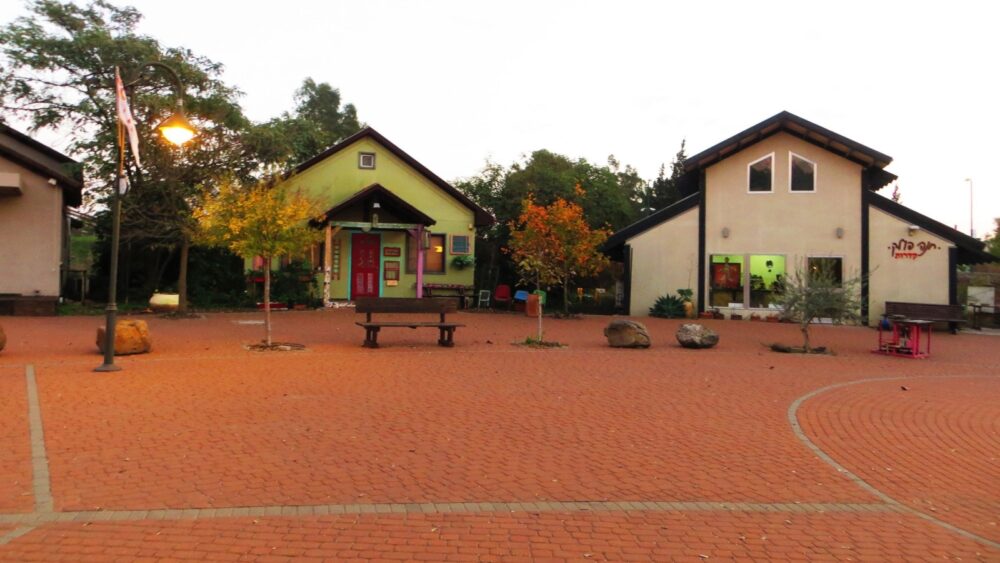 The idea for an artist’s village in Aniam began as a dream in 2000. Today, the village has dozens of artists working in a variety of media, including clay, ceramics and painting, along with blacksmiths and silver and goldsmiths. Visitors can stroll along a European-style pedestrian mall and eat at a variety of coffee shops and restaurants. Each gallery and building has its own special design and color. 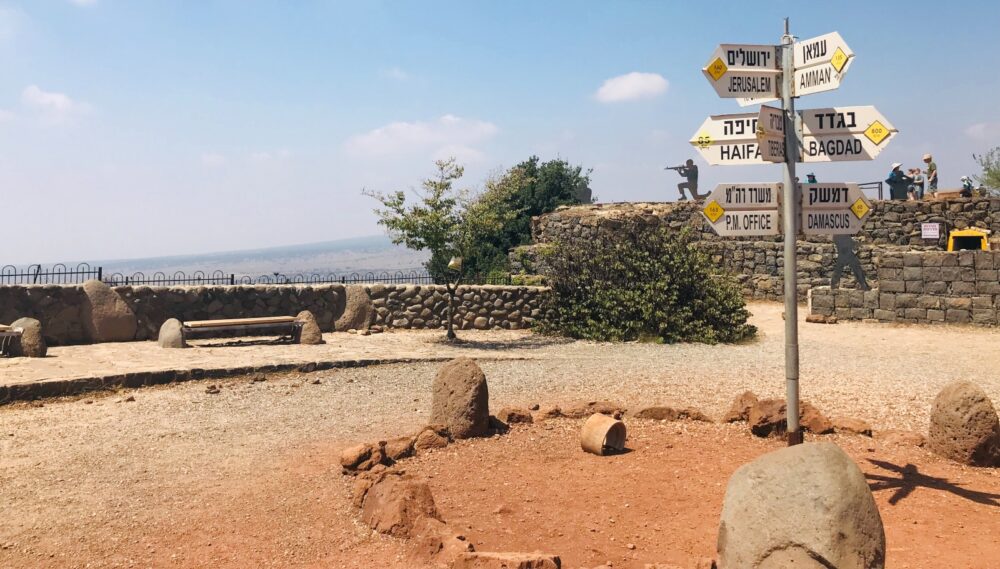 Photo of a signpost on Mount Bental, Golan Heights, by Karima A on Unsplash

All along the roads in the Golan are lookout points where you can pull over and enjoy the views. If you want to sit while looking around, try Coffee Annan, named after the former secretary general of the UN, Koffi Annan, whose name sounds in Hebrew like “coffee in the cloud.”

The café is located on top of Mount Bental, 1,165 meters high. A road sign outside the restaurant indicates the distances to different places in the Middle East, in case you forget where you are. Information: 04-682-0664.