On October 20, award-winning Israeli novelist Etgar Keret will take up temporary residence in a Warsaw art installation billed as the world’s narrowest house.

Wedged between two 1960s-era buildings straddling Chlodna and Zelazna streets – the border between the city and the Jewish ghetto during World War II – the 40-foot-long edifice measures just shy of four feet across at its widest point and only 28 inches at its slimmest.

For years, people walked by the slight gap without ever noticing it. But to Jakub Szczesny of Centrala Designers Task Force in Warsaw, the significance of the location could not be ignored as he works to recreate a Jewish flavor in the Polish city where Keret’s mother was born.

“One of the side effects of communism was a uniformization of society,” the 39-year-old architect tells ISRAEL21c. “The official policy was getting rid of differences among citizens because they were hard to control and understand, and were considered dangerous. The suppressed multiculturalism burst forth in 1991 but there was still a lack of Jewish presence. Our group wanted to do something about it.”

Freaky enough to stay in a narrow space

Inspiration struck Szczesny as he walked by the site three years ago.

“At the crossing of the two streets is where the border of the ghetto was,” he relates. 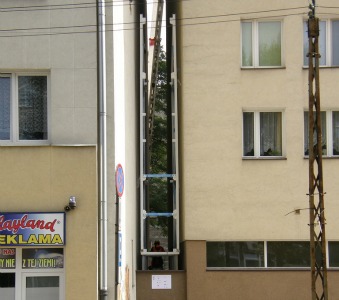 The gap between buildings where the house was constructed. Photo courtesy of Centrala.

“There was an SS psychopath standing on the balcony there and shooting people when he was in the mood. The place is full of negative karma. So I thought this was the perfect space to show the lack of connection between pre- and post-war Warsaw.”

The narrowness of the gap did not faze him.

“I needed to design an architectural structure that would envelop life — a revitalization of an empty space, a connector. I also needed an Israeli freaky enough to stay in a very narrow space, who would play the role of an external eye observing and commenting on how Warsaw is changing drastically and rapidly. The idea was to say [to Israelis], ‘Look – a guy from your country is not just treating this as a space to run from; he has his second residency here.’ Straightaway I went to Etgar.”

Szczesny recalled reading about a visit from Keret to Warsaw when he was in secondary school. At the time, the author’s works were starting to appear in Polish. “He was the representation of ‘new Israel’ to me,” says Szczesny.

Through Keret’s Polish translator, Szczesny made contact and flew to Tel Aviv to meet the novelist and screenwriter. Etgar, born in 1967 to Polish Holocaust survivors, enthusiastically embraced the idea presented to him by Szczesny over a plate of the classic Israeli egg-and-tomato-sauce dish shakshuka.

“He said it seemed like a perfect opportunity to come back to Warsaw,” Szczesny says. “His mother claims he’s a Polish writer who writes in Hebrew,” he adds with a laugh.

The two worked together for three years to make Keret House a reality, with 200,000 zloty (about $63,000) in funding from private and public donors including the Polish National Culture Centre, the Warsaw Bureau of Culture, LHI and Awbud.

“A German maker of very expensive [light] switches wanted to be involved, not because they give a damn about Etgar Keret but because of the project’s uniqueness,” says the designer.

The real culture of Warsaw 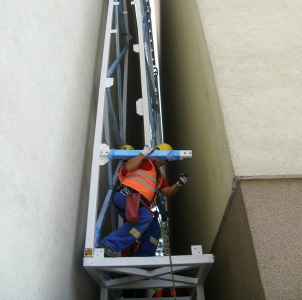 Too small to be a legal house, the steel-framed installation features a foldable staircase and water and sewage systems similar to those used on boats. In September, the façade work and interiors began ahead of a grand opening event on October 20.

In response to a query from ISRAEL21c, Szczesny said he hadn’t thought about placing a mezuzah on the doorpost, but agreed that this Jewish symbol “would be natural.”

“We decided to make it a residency institution,” says Szczesny. Keret will work with the European Union National Institutes for Culture to choose young artists and intellectuals to reside in the structure for a few weeks at a time.

Centrala, which recently won a design contest for its installation heralding the new Museum of the History of Polish Jews, has been deeply involved in shaping a new cultural identity for Poland over the past 11 years.

“Poland is not a popular destination except for ‘pilgrimages of hatred,’ when 18-year-old Israelis come to tour the former death camps and have no interaction with the real thing,” says Szczesny, who studied architecture in Warsaw, Paris and Barcelona, and since 2008 has been involved in cultural projects in Poland, Israel and the Palestinian Authority.

“Keret House will be a place for entering into the real culture of Warsaw.”