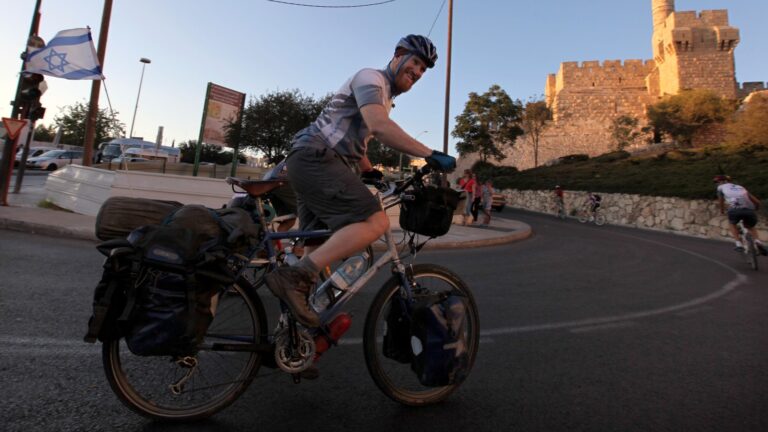 Israeli cyclist Roi Sadan rides his bicycle towards the Old City of Jerusalem on September 14, 2011. Photo by Kobi Gideon/FLASH90

That was the opening line of our 2011 profile of adventure cyclist Roei “Jinji” (“Redhead”) Sadan.

He was then on the final leg of a multi-year, 41,000-mile solo worldwide bicycle and inspirational lecture tour that earned him the title of unofficial diplomat for the Israeli Foreign Ministry.

Jinji survived many harrowing events over the course of his escapades. In 2015, a fall from Stok Kangri mountain in northern India landed him in the hospital for six months and he recovered against all odds.

On March 10, as he was training for another major cycling trek in North America, Jinji was sideswiped by a tour bus close to his home at Kibbutz Rosh Hanikra in northwest Israel.

This time, he could not be saved. Jinji died two days later at Galilee Medical Center in Nahariya.

However, this extraordinary Israeli man had previously signed an organ donor card.

His grieving parents agreed to honor that wish, enabling the transplant of Jinji’s vital organs to gravely ill patients at Beilinson Hospital and Schneider Children’s Hospital of Rabin Medical Center, and Ichilov Hospital of the Tel Aviv Sourasky Medical Center.

Over the same weekend at Galilee Medical Center, a 56-year-old man died and his heart, lungs and kidneys were sent to four different hospitals for transplantation into five patients ranging in age from 41 to 63.

“The occurrence of two men being pronounced brain dead over a weekend, and the rescue of their organs, required special preparation, additional staff members on hand, and hard work around the clock,” said the medical center’s director-general, Prof. Masad Barhoum.

“I thank all the medical and nursing staff, transplant coordinator Eva Steiner, and the families of the deceased for their noble behavior in agreeing to the donations and thus, saving lives.”

ISRAEL21c joins people across the globe who mourn the tragic death of Roei “Jinji” Sadan and salute his family for allowing his soaring spirit to live on in others.