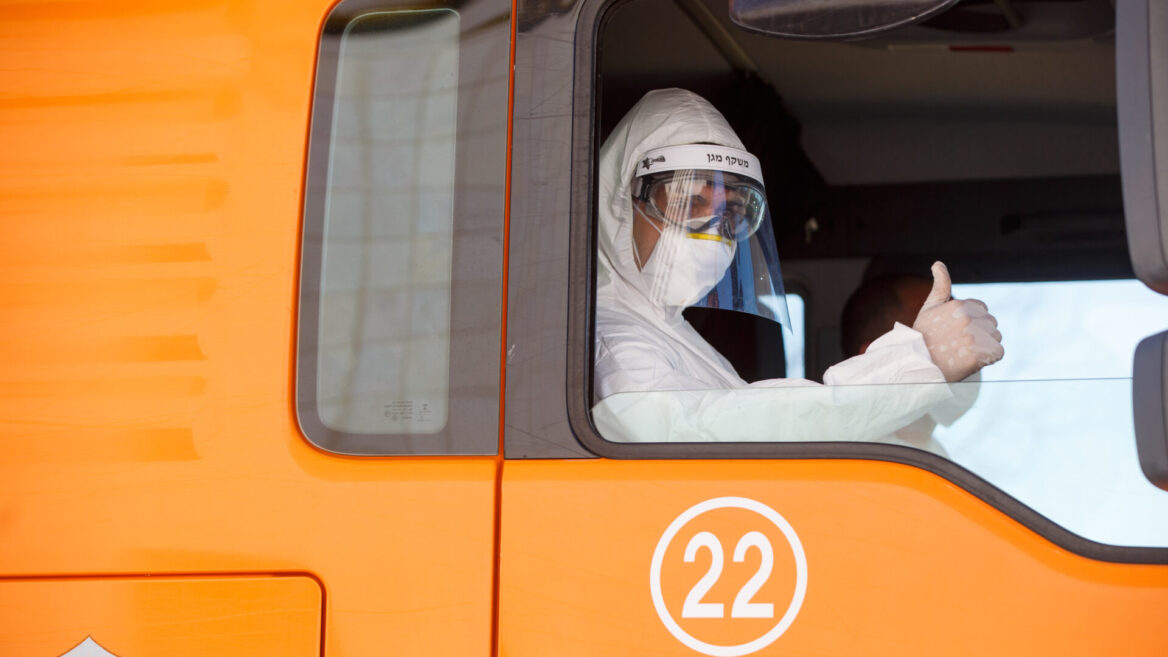 It’ll be fine… an Israeli firefighter joins in the effort to disinfect Assuta Hospital in Ashdod on March 22, to help prevent the spread of Covid-19. Photo by Flash90

The coronavirus pandemic has fundamentally changed our daily lives. The virus has ushered in economic uncertainty, fear of losing loved ones, and the general anxiety of not knowing how long this crisis could last.

Each country facing this threat has adopted different strategies on curtailing the spread of this disease. The global community is still trying to figure how best to “flatten the curve” and save lives.

In today’s connected world, other countries can learn from each other’s best practices. It is worth noting and learning some of those practices from Israel, the Startup Nation.

It is not just about how Israel is combating the virus’s spread using technology but also about the Israeli attitude in facing adversity and coming out stronger.

For Israelis, this pandemic is a war.

Since its inception, Israel has had to prepare for any possible scenario with a strong partnership between the Israel Defense Forces and the public sector.

Americans, who are a resilient people, could learn from how the citizens of Israel have been able to thrive despite wars, terrorist attacks and the daily stresses of life.

Part of what makes the coronavirus so frightening is the seeming open-endedness of these lockdowns. Being resilient during a period you know will end eventually is one thing but being strong despite not knowing how long a difficult situation will persist is another.

Moving fast, despite pressure not to

The threat of a biological attack has worried Israeli leaders for decades, and that is reflected in how the government has taken on the coronavirus.

When Israel first announced it had taken what were deemed drastic measures at the time, many in the political and business community in Israel and abroad thought these actions were unwarranted.

In the face of possible diplomatic blowback, Israel chose to move quickly and enact stringent measures. These included not allowing travelers from certain countries to enter Israel and quarantining Israelis arriving from those countries as the virus was spreading globally.

At this point, in countries such as Italy and states like California, no measure seems too extreme in curbing the virus’s spread.

In general, when it comes to security Israel has been accused of overreacting at times. In this case, with a relatively lower number of infected patients and a low death rate, it appears the Startup Nation’s actions may have been warranted.

In Israel’s battle in securing the homeland the use of technology has been key in keeping the public safe.

Not without controversy, Israel is using technology to track the cellphones of those who may have the coronavirus. In order to track and enforce quarantines, Israel has been using cellphone data sourced by its security services for a 30-day period.

“The government’s fast response to the situation is a great testament to Israel’s technological maturity and readiness to quickly roll out tech solutions to tackle challenges of national concern,” writes cybersecurity strategist Jonathan Bennun, an alum of the IDF’s 8200 signal intelligence unit and a former Cisco Security professional.

“At the same time, this use of technology here is not novel; it is rather about promptly opening a data flow between different government branches with the right metadata,” Bennun adds.

Israel’s practice is being observed as the United States is currently engaging major technology companies in using cellphones and carrier data to potentially track activity via phone numbers, cellphone towers or digital footprints. This practice can also be used to track suspected quarantine violators as well as crowds by using GPS location, cellphone tower workload, traffic maps and social media.

Sanitizing and filtering data are key during this crisis, as there will be many false notifications and false positives leading to data fatigue and wasted resources. This is where Israel’s expertise in machine learning and automation can help improve data quality.

The organization of data could help distribute, allocate and operationalize resources such as sending supplies directly to patients and to hospitals dealing with an infected population.

When the time comes, authorities could notify people suspected of being infected with COVID-19 as well as deploy and mobilize security forces and health workers to a specific location.

Other ways Israel is using technology to combat the virus is through the plethora of innovations from established companies and startups.

Examples include the ViriMASK, which offers those on the front line full facial protection from the virus; and Soapy, a handwashing station that helps people wash their hands effectively, even in places without plumbing.

Israeli startups thrive on tackling the world’s biggest challenges, and we’re likely to see more throw their hats into the ring. (Watch for an ISRAEL21c story detailing many med tech solutions already at work in combating the coronavirus crisis.)

The Israeli Innovation Authority is offering NIS 50 million ($13.6 million) worth of grants to startups coming up with solutions on how to fight COVID-19. Several Israeli labs are working toward developing a vaccine.

It is during economic downturns and times of crisis that many of the world’s most successful companies were created, and this crisis could usher in a new crop of future unicorns.

While the United States has one of the largest and most powerful militaries in the world, most Americans don’t interact with the military in their daily lives.

In Israel, the IDF plays an important part in the country’s day-to-day life and has even been called to help when other countries faced natural disasters.

In places like Europe, militaries have stepped up their role augmenting police and security forces, and it looks like in New York and California this may be the case as well. Floating military hospitals are going to help treat the overflow of ill citizens and the National Guard has been put on call in many states.

Militaries by their nature prepare for any contingency, and, as we are seeing unfold across the globe, are taking an active leadership role.

As Abraham Ronen, a security expert from ActPro LTD Consulting & Project Management states, “The military is an integrated and familiar part of Israeli society. The challenge we are currently facing is how active a role the IDF will play in taking responsibilities from the police and other security forces, particularly as the coronavirus is also impacting other players in the region.”

It WILL be ok

For Israelis, optimism that all will be fine (“yihiyeh b’seder”) is not some vague hope that things will work themselves out. It means things will be okay because people will actively figure out solutions.

Given Israel’s security situation, one would think that its citizens would be in a constant state of depression or panic. The reality is that living with purpose, close family and peer connections (which are being tested to an extreme these days because of self-isolation) and finding meaning in struggle have made Israel’s citizens among the world’s happiest.

People in Israel understand hardships will happen, but that ultimately they will prevail. That is a lesson many in the United States are learning now.

No one knows where this will lead. But both the United States and Israel are learning more every day about the virus. The examples above prove ways in which we can be proactive on a national scale to battle the COVID-19 crisis.

Jonathan “Yoni” Frenkel heads a digital marketing agency, YKC Media, that focuses on engaging millennial and tech professionals through content. He’s been involved in the New York-Israeli tech community for many years and previously held roles as a nonprofit professional at both the IAC Dor Chadash and AIPAC.