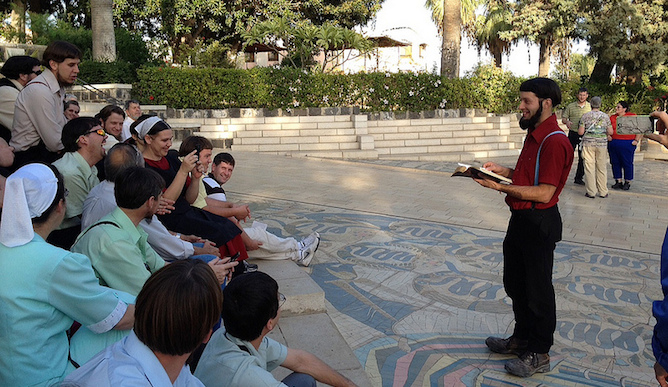 The group touring Christian sites in the Galilee. Photo by Micah Smith

When Israeli Chief Rabbi David Lau entered the conference room at the Chief Rabbinate in Jerusalem with Parliamentarian Aliza Lavie, a group of 31 Anabaptist Christians was in the midst of singing a medley of hymns, harmonizing so beautifully that staffers had been standing in the halls to listen. No one seemed fazed that the hymns were not Jewish, least of all Lau.

“I ask you to continue your singing, because we heard it together [as we approached the room] and it was amazing,” the revered rabbi told the awestruck pilgrims. “Sing something about Jerusalem.”

This extraordinary scene was, for many of the visitors, the apex of the third Anabaptist mission to Israel. It spanned November 24 to December 1, 2013, including most of the Hanukkah holiday.

Bishop Ben Girod of Idaho, founder of Anabaptist Connections, explained to Lau that his travel companions – from the Protestant denomination’s Amish, Mennonite and Hutterite sects across North America – had “forged and developed a unity to come to Israel.”

“We have discovered that in order for us to come to our destiny with the Lord, we need to bless our Jewish brothers,” Girod said. “We have, in our history, a somewhat anti-Semitic attitude. And we have come here in the past to repent for that. Now we want to develop relationships with you. We want to draw close to you because we want the blessing of Abraham on our people.”

Lau replied: “I want it also — I want a good relationship, and I bless you for me and for you. If I bless you, I feel that you bless me. I hope that one day all the people in the world [will] bless each other.” 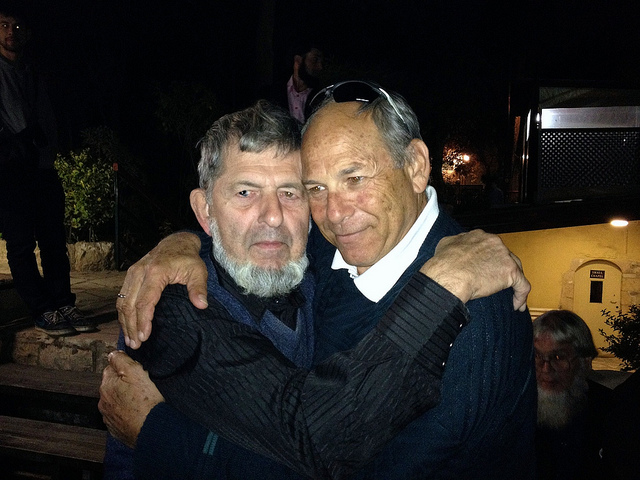 Esther Ochana of Keshet: The Center for Educational Tourism in Israel, which organized the trip, tells ISRAEL21c that the Anabaptist visitors are “a very warm and loving group. They told us that their mission is to come and apologize to the Jewish people for what Christians have done to the Jews in the name of Christianity, especially standing by and not helping during the Holocaust. So we tried to arrange for them to meet with as many Jewish religious figures as possible, and with Holocaust survivors.”

Before meeting Lau, the men and women had an audience with Rabbi Shmuel Rabinovich, the rabbi of the Western Wall; and with Rabbi Dov Lipman, the only member of Knesset born in the United States. Afterward, they visited Jerusalem foreign affairs and tourism director Dov Kalmanovitz, who still bears the scars of a 1988 firebomb attack by an Arab youth.

They toured Yad Vashem, Israel’s official memorial to victims of the Holocaust, and spoke one on one with several Holocaust survivors, asking forgiveness.

Wherever they went – from the Masada World Heritage Site in the south to the Banias Nature Reserve in the north – the Anabaptists’ distinctive dress and hairstyles attracted attention. The strictest Anabaptists shun modern technology, whether it’s electricity or automobiles. Flying to Israel and touring in a bus was therefore just as radical as it was to seek forgiveness on behalf of their ancestors.

“A lot of these people had problems in their communities for coming to Israel because not everyone agrees with their mission, and because they came on a plane,” says Ochana. “But they did it because they really believe that’s what they should be doing, and it’s amazing.”

‘My heart was drawn to Israel’

Micah Smith, who has accompanied Girod on four trips to Israel, sports a Star of David tattoo on his right arm in homage to his mother’s Polish Jewish origins.

“This is really a reciprocal experience,” Smith tells ISRAEL21c. “When people come to Israel and see it firsthand, it’s an antidote to some of the false perceptions that they get in America and other places. They take the message back and it illuminates people in their own communities.” 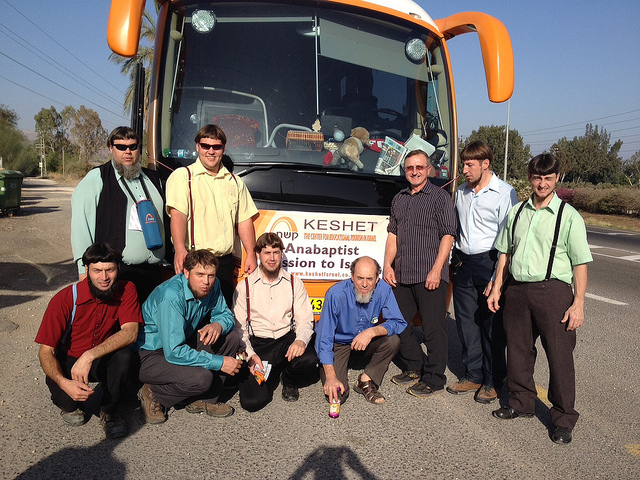 About half the participants had been to Israel previously, not only to make amends for past sins but also “to experience the Bible through the land and the people,” says Smith.

For Naomi King of Lancaster County, Pennsylvania, her first trip to Israel was highlighted by her baptism in the Jordan River and touring Christian sites in the Galilee and Jerusalem. “I wanted to see where Jesus walked, and I wanted to extend our love and gratitude to the Jews,” she tells ISRAEL21c.

Her brother, Alvin Lapp, had been in Israel once before. “I wanted to return because I really loved it and I just wanted to be here,” he says.

“I was here a year ago with a large group, and I really had a heart to come back,” she explains. “I had a desire to bless the people, and I continue to pray for the peace of Jerusalem.”

Mast relates that visiting a moshav, a cooperative agricultural village, reminded her of home. “I really connected with that, because where we live it’s a community setting on a large acreage with a meeting house and our own school. We each raise gardens and have businesses. I see so many similarities in values.”

Zacharias and Wilma Waldner, Hutterites from Manitoba, Canada, had the same reaction when visiting a kibbutz. Unlike a moshav, where every resident makes and keeps his own income, on a kibbutz the members have no personal property and live collectively. “We live in kibbutz-like communities,” Zacharias Waldner tells ISRAEL21c.

A bar mitzvah ceremony at the Western Wall reminded him of home, too. “We also have ‘bar mitzvah,’ but at age 15 instead of 13. Our girls join the ladies in the garden working, and the boys join the men in the fields and barn. Even our ministers dress exactly like the rabbis.”

Most of all, Waldner emphasized, “Meeting with the rabbis, the important part for me was to see that they accept us instead of pushing us away.”

At the Chief Rabbinate, Henry Yoder presented a red kerosene lantern to Lau. “We want to encourage you to keep your light shining, because it’s you that brought God to us, and we look to you as our older brother,” Yoder told Lau. “We want to stand behind you, and we honor you for the light that you have brought to us.”

UNCOVER ISRAEL - Get the ISRAEL21c
Weekly Edition free by email
Sign Up Now!
Bring Israel's story to life.
Millions of people around the world rely on us to gain a deeper understanding of Israel. We are the trusted source for original content you won't find anywhere else.
You can make a difference. Donate today to support journalism that brings Israel’s story alive.
SUPPORT ISRAEL21c
Read more on:   Travel, Keshet, Christmas, trip, See Israel