Seeking a recommendation for a music teacher for your child? A plumber to fix that leaky pipe? If you search Angie’s List or Yelp, you can’t be sure you’re getting unbiased feedback.

WhoDoYou was created by an American-Israeli to solve that problem, as well as the annoyance of posting repeated inquiries on the same topic. Essentially, it turns conversations into searchable business listings.

“A 2013 Maritz Research survey revealed that 40% of people who use online review sites are skeptical of the results, because people are constantly caught posting fake reviews to boost ratings or harm competitors,” said Yoav Schwartz, founder and CEO of WhoDoYou. “Meanwhile, millions of genuine referrals are shared between friends each year through social networks like Facebook and Twitter. We capture all of this great advice that is otherwise lost, and make it available to people all over the world.”

WhoDoYou collects advice from real conversations on leading social networks, and converts them into authentic referrals that guide people to the local service providers they need. Statistics provided by WhoDoYou show the average user has 408 Facebook friends, belongs to 20 groups and typically finds 153 private recommendations in their personal WhoDoYou vault, ranked for relevance.

With more than half a million opinions gathered in a matter of months, the website and  Android app now help people find local service providers in thousands of cities in more than 50 countries.

Cutting down conflicts of interest

The folks behind WhoDoYou are not typical Israeli post-army high-tech whiz kids. Each cofounder is in his 40s and started his career outside of Israel.

“I moved to Israel in June 2007 from Seattle, where I was with Microsoft,” Schwartz tells ISRAEL21c. “They bought an Israeli company, and I worked on the integration for four years. I left Microsoft in fall 2011 and began working on my own self-funded prototype for WhoDoYou. It’s very gratifying to build something on your own, and I had a window of opportunity to try this. It’s been a thrilling and challenging ride.”

After honing his concept and getting an initial investment commitment from Medved, he partnered with Jeff Schneiderman, previously CTO at Answers.com.

They wanted to offer something you can’t get from Yahoo, the Yellow Pages, Amazon, Angie’s List or Yelp.

“Cornell researchers did a study where they found that of the 3,500 top-rated reviewers on Amazon, about 85 percent had received the products they rated for free, and hadn’t disclosed it,” says Schwartz. “There are conflicts of interest, and many people immediately go to bad reviews because they figure they are more legitimate.”

WhoDoYou was developed to eliminate the guesswork.

“We gather authentic bits of advice shared between friends. Between five and 10% of chatter is people asking for recommendations. It’s a shame all this gets asked and answered and then goes away. Our algorithms allow us to identify patterns in this chatter, and from there we developed additional layers of filtering through the massive amounts of data,” says Schwartz. 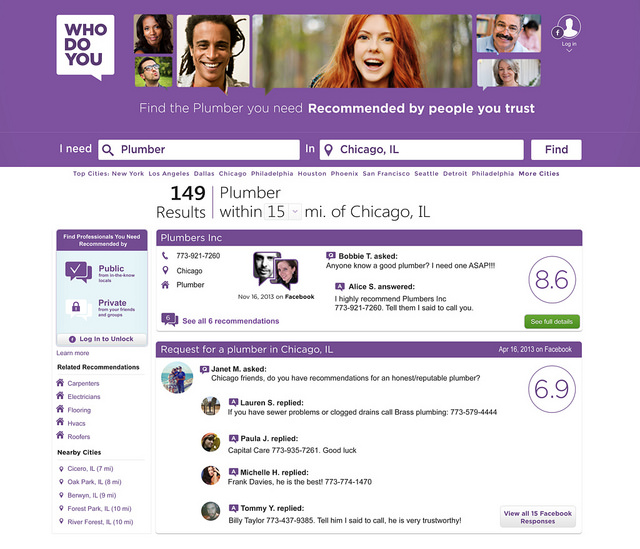 “This is a powerful way to mine the wisdom of your crowd without asking every time. You can find what has already been asked and answered. There is so much noise in this space of social recommendations right now, but virtually no company is doing exactly this.”

Investors liked the volume and quality of the information gathered.

“I was compelled by WhoDoYou’s ability to scale,” said Jacobsson. “Angie’s List adds 60,000 reviews per month, and it took them nearly 20 years to get there. WhoDoYou is now gathering more than 30,000 public recommendations per month, and they’ve been at this less than a year.”

The company is based in Lod and its six employees represent various immigrant groups, including an Ethiopian senior engineer and a Ukrainian mobile app developer.

There is no charge for WhoDoYou users; businesses can pay to be featured on the site at different tiers of service.

“We’re really committed to build something that provides value to both sides of the equation,” says Schwartz. “We really believe in the idea and the vision.”