A new international airport, miles of biking trails and even an Olympic ice rink are all planned for the Red Sea beach resort at Eilat, at Israel’s southern tip.

It’s all part of the Ministry of Tourism’s plan to upgrade and renew the area in the coming years, in cooperation with the Eilat municipality and Eilat Hotels Association and with the help of incentives coming to the port city as a national priority zone.

This sun-drenched spot is already a prime place for snorkelers and scuba divers who come to get a close-up view of the Red Sea’s 1,200-meter coral reef – home to more than 270 species of coral and 2,500 types of colorful underwater creatures, some of them unique to the region.

Boating, parasailing, kite surfing and wind surfing are popular here, and any time of the year tourists can enjoy the underwater panorama while swimming with bottle-nosed dolphins at Eilat’s Dolphin Reef or through the vast window of a glass-bottom boat.

Avi Kandelker, head of the Eilat Tourist Bureau, says the water does get chillier in the off season, but that doesn’t stop the hardier visitors – particularly those from 15 North European countries who can take advantage of weekly direct flights to Eilat. 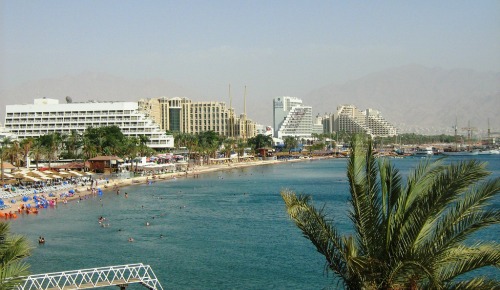 Photo courtesy of the Eilat Tourist Bureau
The beaches of Eilat.

Perhaps because of the novel contrast between the heat outside – Eilat’s summer temperature can soar to 45C (113F) — tourists get a kick out of the resort’s Ice Space attraction, an ice sculpture exhibition and snowy play area (coats included) overlooking the Gulf of Eilat marina.

Building on this frigid theme in a big way, the next major addition will be the Eilat Ice Park, now under construction. The complex will encompass an Olympic-size rink ringed by 3,500 seats, a 400-seat theater for ice shows, a “snow” play area and an adjacent shopping center.

This venue may also be a boon for the many international conventions held in Eilat each year, such as the Eilat-Eilot Renewable Energy Conference. Currently, the largest space available seats just 1,000. Kandelker says that Eilat Mayor Yitzhak Halevi is hoping to build a large meeting center in the future.

Local tourism officials are hatching plans to attract more global visitors to the resort, a top destination for Israeli vacationers. In 2009, just 253,000 of 2,301,500 tourists staying in Eilat were foreigners. 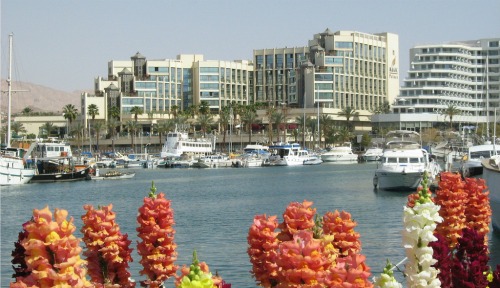 Neither Eilat’s small airport for domestic flights from Ben-Gurion International Airport, nor the nearby Ovda airstrip used by the European airlines, is equipped for jumbo jets. “If you want to promote tourism, you need a new airport that every plane can land in,” says Kandelker.

The situation will improve dramatically once the Israel Airport Authority (www.iaa.gov.il) lays the groundwork for a large international airport near Timna, about 15 miles north of Eilat.

This project could in turn spur a growth in hotel rooms for vacationers and business travelers over the next 10 years. Today, Eilat’s 51 hotels and youth hostels run just under 70 percent of capacity on average.

What to do in Eilat

All the development planned for this vacation spot doesn’t mean there isn’t already plenty to do in Eilat.
According to Kandelker, the most popular tourist attraction in his native city is the Underwater Observatory marine park and museum within the Coral Reserve. Sharks and sea turtles swim in large open-air custom-built tanks, and visitors get a panoramic view of the tropical fish and corals of the Red Sea. Lots of hands-on kids’ activities are offered here.

Hiking, rappelling, cross-country running, jeeping and camel rides are all available in and around the surrounding granite mountains and canyons. Recently, a 21-kilometer (13-mile) bicycle trail around Eilat was rebuilt and an intra-city bike trail is to be completed over the next few years.

Birdwatching is another major draw, since Eilat is a key stopover for migrating African and European birds. The International Birding and Research Centre monitors the visiting birds and offers guided tours as well as a two-week session for volunteers during the autumn and spring migration.

Also in the Eilat area is the Hai Bar Nature Reserve, an 8,000-acre sanctuary for many rare and endangered desert creatures. The What’s Up observatory offers a glimpse of the solar system, while the Botanical Garden and Organic Farm has a new rainforest exhibit.

Other options include the IMAX theater and the Kings City high-tech Bible theme park (http://www.kingscity.co.il), which has a new area designed for families with younger children.

At night, tourists can stroll along the beach promenade and take their pick of fine restaurants, nightclubs and VAT-free shopping.