Looking for an out-of-the-box outing in Israel?

ISRAEL21c was invited to join Assaf Shimoni on a two-hour tour. 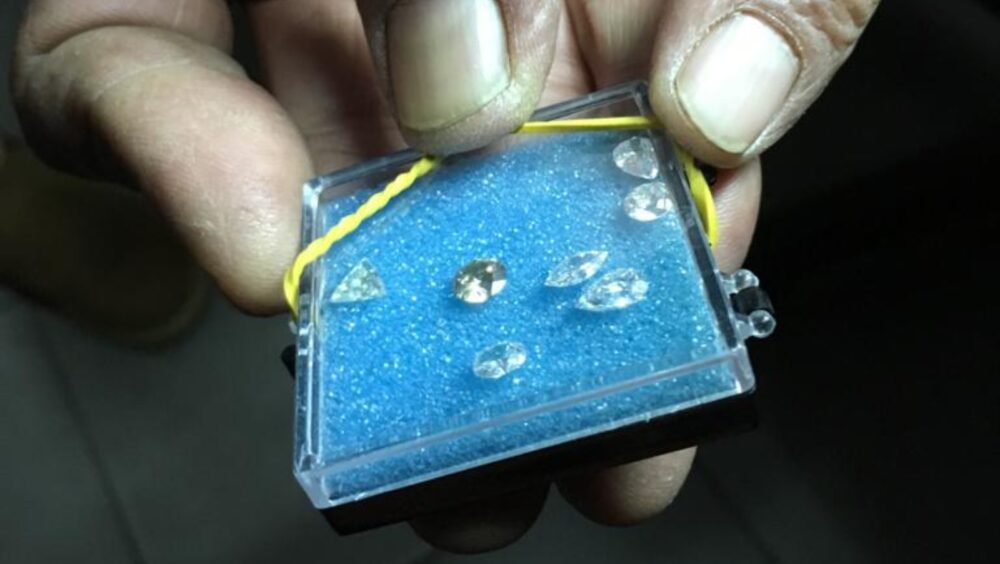 An Israeli diamond cutter showing off his polished diamonds. Photo courtesy of IsraelTours4U

If you’re imagining a gigantic, bustling trading floor that wouldn’t look out of place on Wall Street, think again.

Deals are conducted quietly at the Diamond Exchange, at hundreds of tables that dot the trading space. 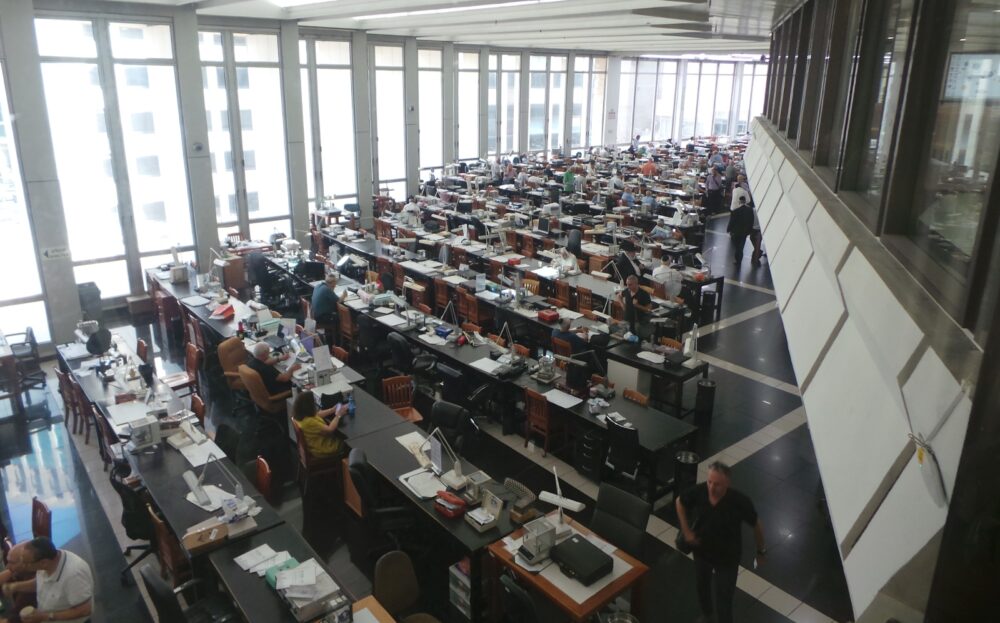 The largest trading hall in the world in the Israel Diamond Exchange. Photo courtesy of IsraelTours4U

Sellers post online what they have, and buyers post what they need. Only if there’s a match will the two meet up in person. But even today, deals are still closed with a handshake and a hearty “mazel tov!” 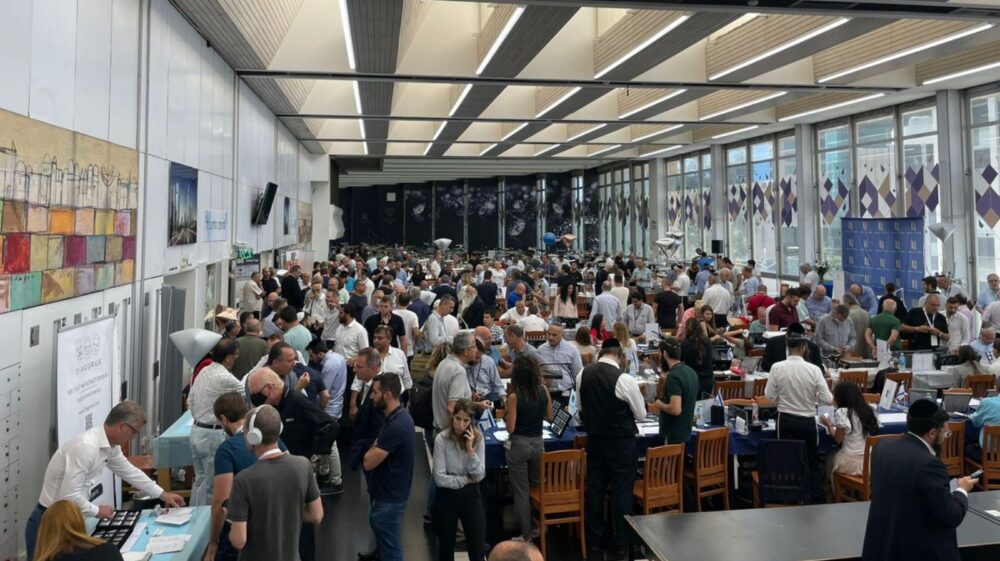 Diamond dealers and traders selling their wares in the Trading Hall. Photo courtesy of IsraelTours4U

Make no mistake, though: All those airport-ready wheeled trolleys the sellers are pushing around the building could have millions, even tens of millions, of dollars’ worth of diamonds in them.

Accordingly, the tour starts with security – and lots of it.

To gain access to the Diamond Exchange, you must have your picture and your fingerprints taken. Oh, and don’t forget your passport or Israeli identity card! 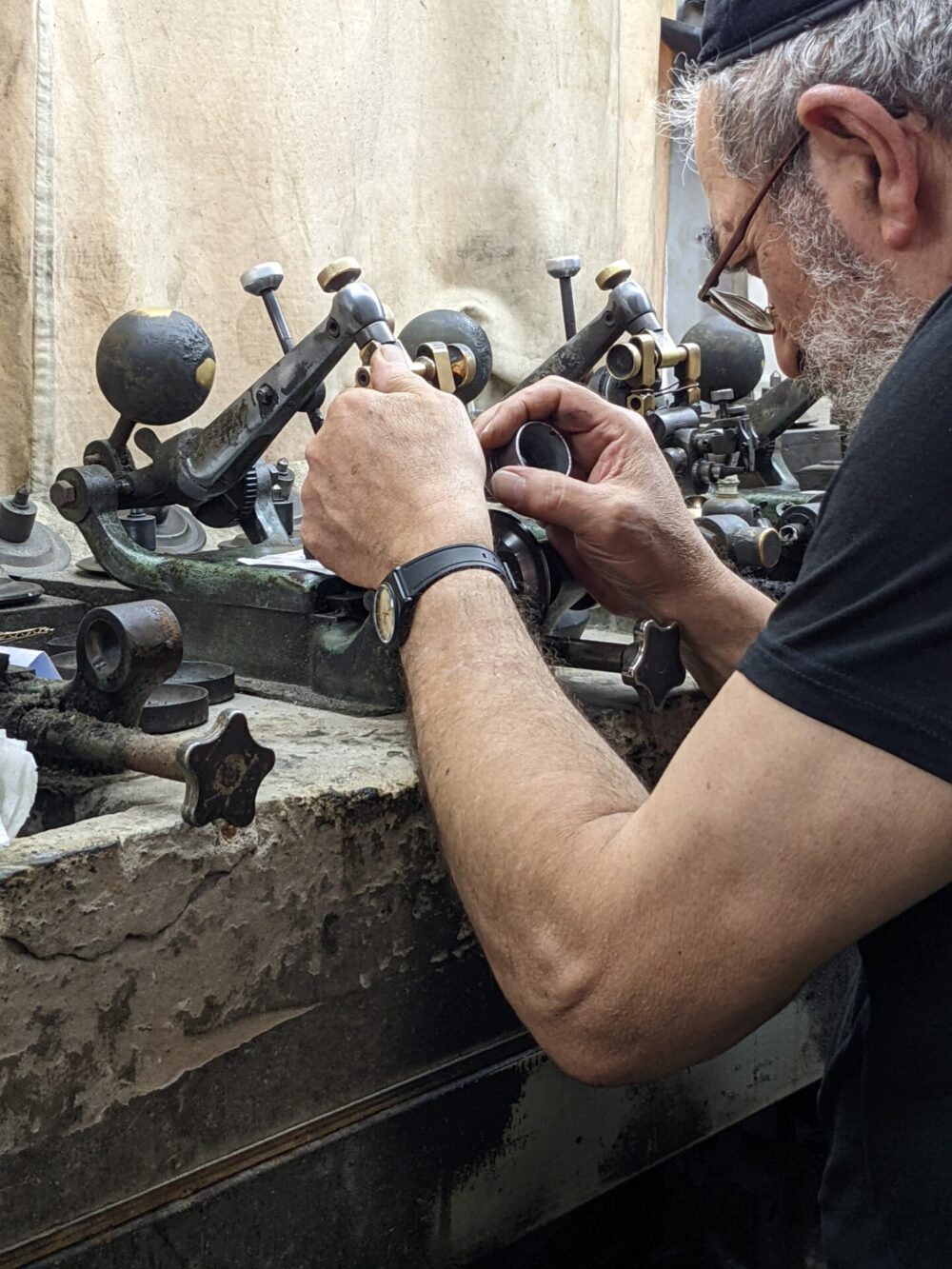 While Shimoni assured us the tours – which can run up to $80 a person – are not a veiled sales pitch (this is not India where the auto-rickshaw driver stops by his “friend’s” place to sell you a fake cashmere scarf) – they are run by IsraelTours4U in partnership with Savransky, an international private-label jewelry manufacturer.

Indeed, after the formal tour Shimoni escorted us to the Savransky showroom where tea, cookies and fresh Medjool dates were waiting. All that was missing was the smell of baking bread to get our mouths watering for a good deal on diamonds.

We didn’t succumb to temptation, and you don’t have to, either. The tour is fascinating, all on its own.

Here are a few of the tidbits we picked up.

Israel is the leading center of big diamonds, one carat and up. For smaller diamonds, buyers these days go to India.

There used to be a thriving ecosystem of polishers and diamond cutters outside on the side streets of Ramat Gan. 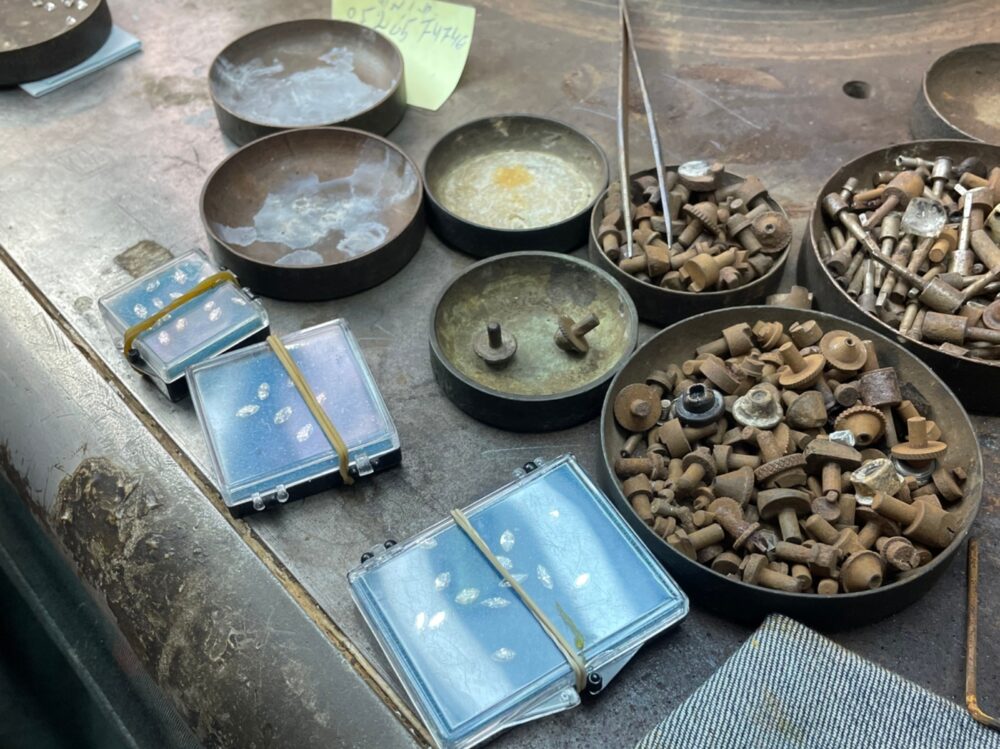 A diamond cutter’s table with tools that haven’t changed for decades. Photo courtesy of IsraelTours4U

But, like the small stones, most of that kind of painstaking production has moved to cheaper locations, India in particular. Once there were 400 small factories in Ramat Gan; today there are no more than 20, Shimoni told us.

Israel has no diamond mines, so the raw material must be imported – from Africa, Australia and North America.

“We used to import from Russia, as well,” Shimoni told ISRAEL21c, “but not anymore because of the sanctions.”

Diamonds have traditionally been a Jewish business.

“We were not allowed to hold property or to deal with property” in many European countries, “so we got into diamonds just like we got into banking,” Shimoni explains

Furthermore, when Jews fled Europe during the world wars of the 20th century, they weren’t permitted to take any large possessions. “Diamonds could be sewn into their sleeves,” Shimoni notes.

But if you were expecting the Diamond Exchange to be populated almost exclusively by elderly ultra-Orthodox men, you are in for a surprise. These days, the percentage of ultra-Orthodox buyers and sellers has dropped from a high of 90% to just over 40%.

“It was a tradition that went from father to son. But now the young people have decided they no longer want to get into their fathers’ business,” explains Shimoni, or they prefer to work as traders, jewelry makers, creators and designers rather than diamond cutters. 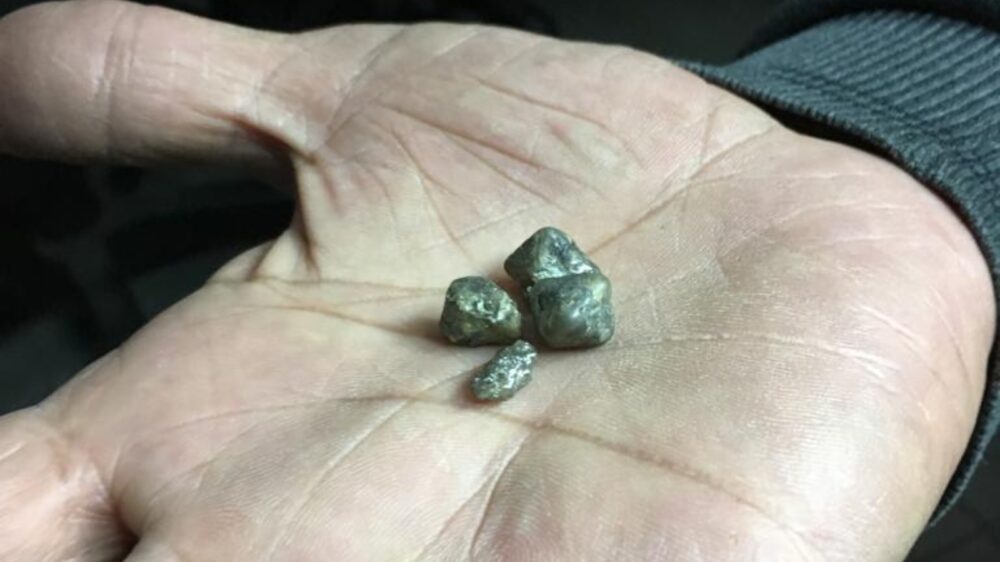 Rough diamonds before being cut and polished.

Part of the reason may be that the romance is fading.

Each rock used to be carefully inspected with a magnifying glass, but for the past 10 years the raw diamonds have been placed into a machine and a computer does the analysis in minutes.

“Before the computers, we could argue for a century. Now, the price is clear,” Shimoni said.

Nearly all the stones that go through the Diamond Exchange are purchased by jewelry shops in the United States. The shop owners, or various middlemen, come to Israel several times a year to get the best deals. 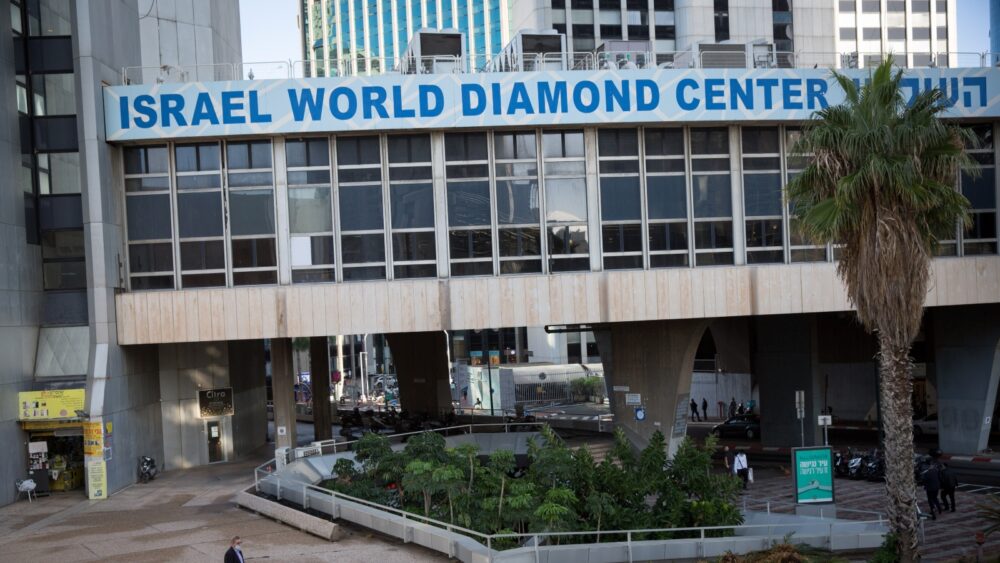 When the visitors enter this self-contained world, they may feel like they’re in an airport, between the wheeled trolleys and the myriad restaurants serving some 15,000 people who work here.

“To become a ‘club’ member, of which there are 3,100, you first need to be a relative or you need someone who can vouch for you,” Shimoni says.

After you apply, you need to wait 10 years until you get permanent membership and during this time, you’ll have to come up with four financial guarantors who will vouch for you. 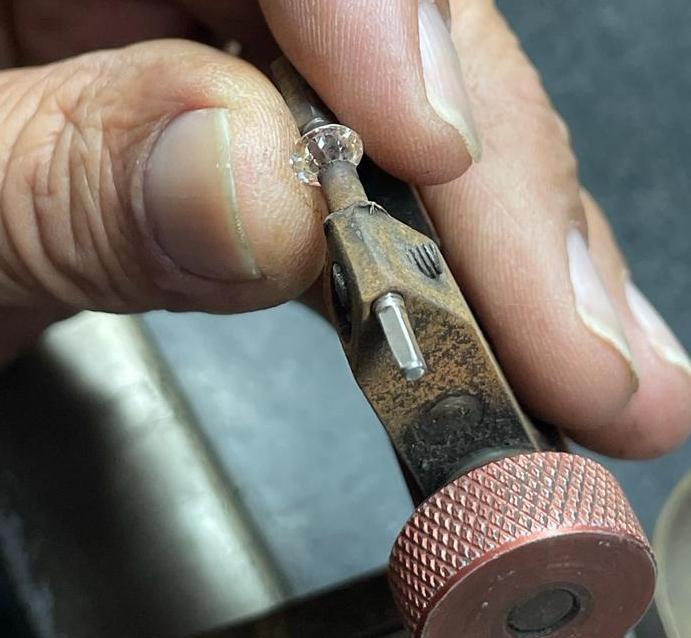 A diamond cutter’s tool that holds the diamond while being cut and polished. Photo courtesy of IsraelTours4U

Cash is king at the Diamond Exchange, which is located across a footbridge from Tel Aviv. In the 10-year waiting period, all sales are cash only. Once you’re granted membership, you can apply for a loan or arrange for a wire transfer.

Club members have their own code of conduct. If there’s a dispute, they pledge not to run to a lawyer but to choose an in-house meditator. And don’t try anything funny, Shimoni said.

“If you do something that’s not honest, it might have taken 10 years to get your membership but in two seconds you’ll lose it.”

Stones pass through many hands

Shimoni explains that a diamond can go through six or seven hands until it gets to a jewelry shop in, say, California.

“You’ve got the agents from De Beers [the British and South African-based firm that controls most of the world’s diamond mines], the various traders, the guy who does the polishing, the factory that does the cutting, a middleman in New York.” 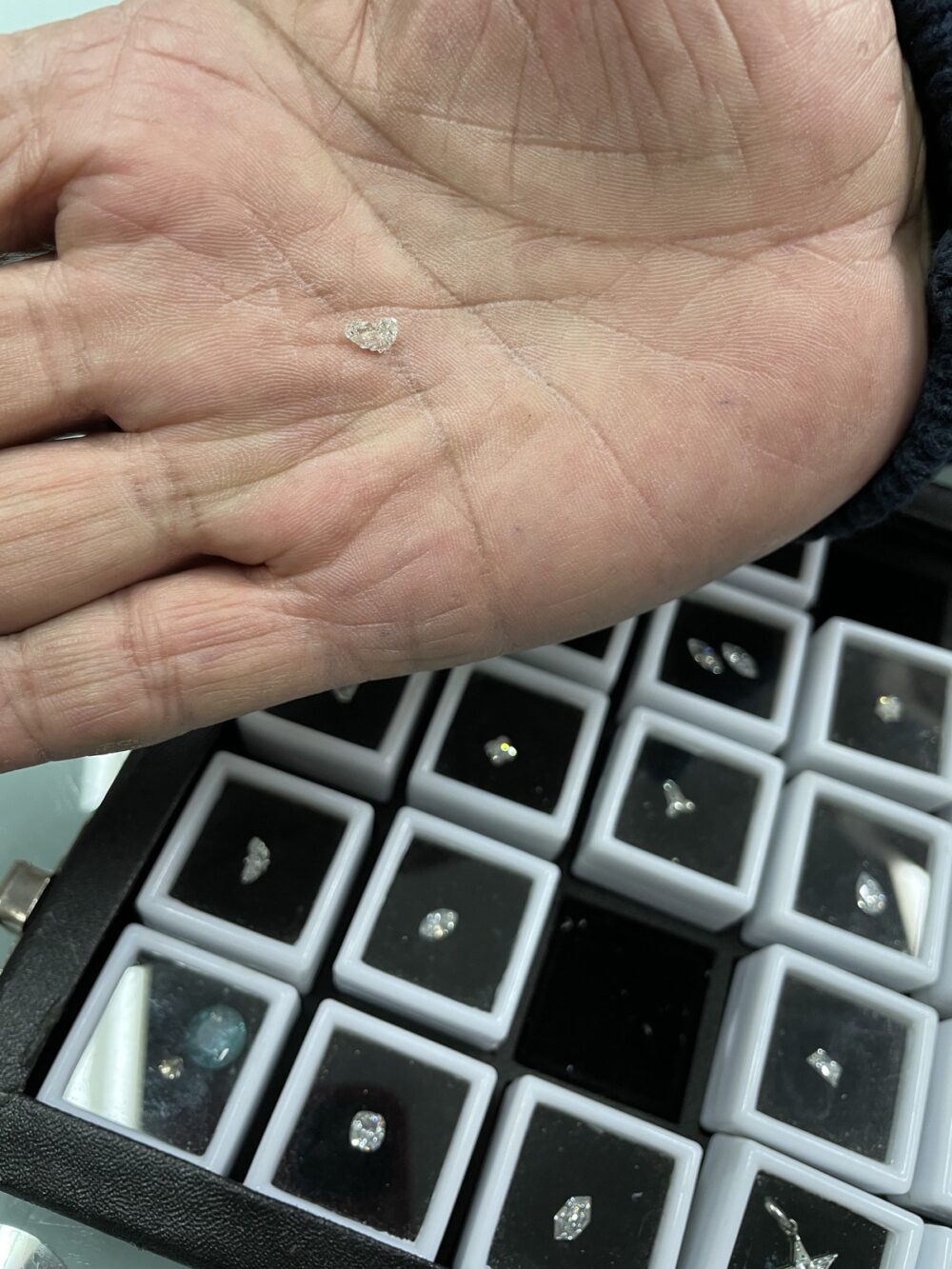 Unique diamond cuts that have been mastered by Israeli cutters. Photo courtesy of IsraelTours4U

Could the Diamond Exchange be entirely digital one day, similar to how one can buy a car or couch or even a condo online without inspecting it physically?

Shimoni doesn’t see that happening. “Maybe they can sell the $5,000 pieces that way, but nobody will buy $25 million in diamonds without seeing it in person first.”

In the Savransky showroom, we were impressed by a very unusual black diamond.

Shimoni informed us, however, that black diamonds are the cheapest stones. He pulled out a rare red diamond, the most expensive in the world, where a single carat “can cost you up to $1 million.”

By the way, you will not find synthetic diamonds, such as cubic zirconia, in the Israel Diamond Exchange.

Wine and dine with diamonds

IsraelTours4U is gearing up to offer a variety of Diamond Exchange experiences.

In addition to the regular private tour, there are options to add on a wine tasting; lunch at Tel Aviv’s Carmel Market; an architectural walking tour of Tel Aviv; a sailing tour; or our favorite, a visit to a boutique chocolate factory in South Tel Aviv.

And for the most adventurous (and deep pocketed) visitors, why not enhance a tour of the Diamond Exchange with a two-hour helicopter ride over Israel?