“Swipe the Citadel” at the Tower of David museum. Photo: courtesy

Going to the movies has long been a favorite way to beat the heat of stifling summer or stay warm and dry during winter. While regular cinema experiences are always fun, Israel is a country of creative technologies and a flair for the extreme.

After a quiet river-rafting trip down the Hazbani and Jordan rivers in the north of the country, a new VR action-packed whitewater rafting experience awaits. The Kfar Blum Kayaks group recently inaugurated a made-for-Israel virtual trip down the Wairoa River in New Zealand. 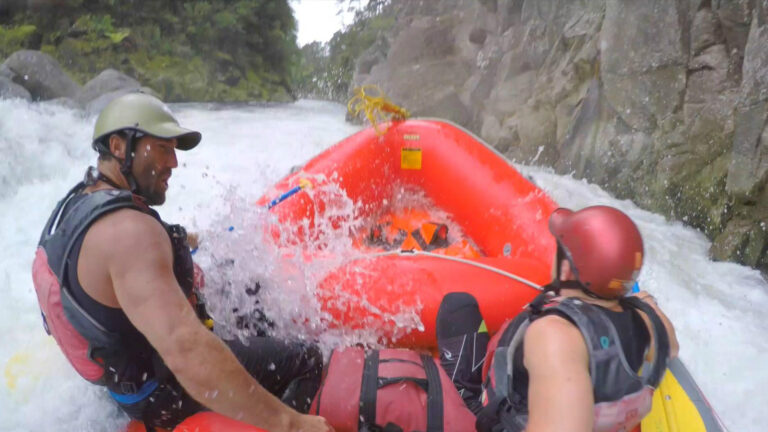 A guide takes you on a virtual trip downstream in New Zealand. Photo: courtesy

Take a seat on the simulator platform chairs and buckle up. This seven-minute rollercoaster of a film will bump you up and down, jolt you side to side, and even spray you with water as Kiwi rafting guide Luke Boddington takes you virtually downstream. The film is in English with Hebrew subtitles, though Boddington does insert Hebrew slang words like “Yalla,” “kadima” and “sababa.” (₪19-30)

Three-dimensional glasses are cool, but the Israeli team behind 7D MAX has an even more exhilarating movie experience for you. Simnoa Technologies  – a world leader in 4D/5D/7D smart chairs for multisensory theaters – offers 16 interactive movies with up to seven special effects that make you feel what you see.

These are short movies – running between seven to 10 minutes — but big on excitement and intensity. The Petah Tikva-based company was founded in 1999 and today supplies its special-effect film experiences to more than 30 countries. In Israel, you can catch one of these exhilarating state-of-the-art shows on a big screen in Eilat, Tel Aviv, Dead Sea, Rishon LeZion or Metulla. (₪25-30)

3. Augmented reality: Tower of David Museum
The Tower of David museum in Jerusalem bills itself as a modern museum telling the stories of ancient history. So, in a world where many people would rather download an app than actually trudge over to a museum, it is fitting that this landmark would go digital.

The Time Elevator in Jerusalem was all the rage when it opened in 1998. The experience of virtual time travel through Jerusalem’s history with multimedia and simulator technologies was truly unique when doors opened to this three-screen ride. Today, it is still exciting to travel virtually across Israel and across time periods, though recent reviews on Trip Advisor highlight a need for refurbishing the theater.

The Time Elevator also has a film on India, enabling viewers to feel historical events of the colorful and bustling South Asian country.

The Time Elevator uses sound headsets instead of surround sound – allowing for the show to be heard simultaneously in several languages. (₪46)