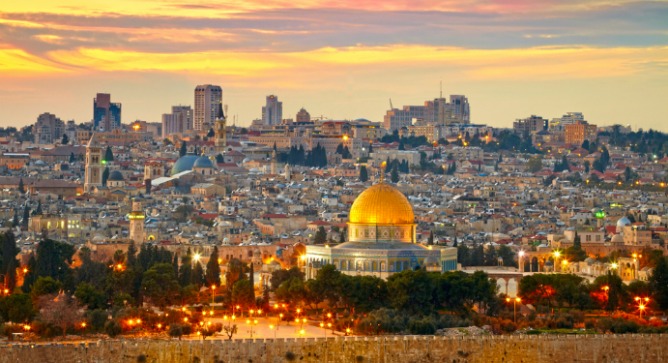 Take the holiest city in the world, mix in thousands of years of history, sprinkle it with fascinating architecture, add a splash of culture, stir in a dollop of culinary delights and then frost with modernity and you’ve got the secret recipe to the world’s pinnacle tourist destination.

Jerusalem has a little – or, actually, a lot – of everything for everyone.

The major sights are definitely a draw but a walk through a charming neighborhood or taking in magnificent views can be just as enjoyable. There are still tons of free activities to choose from. ISRAEL21c starts you off with 18 suggestions. Feel free to add your own ideas to our comments section. 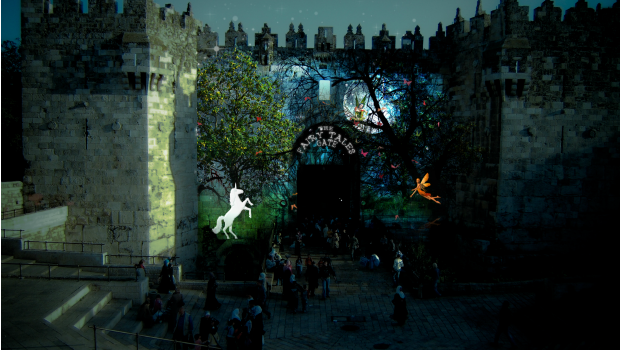 The Jerusalem Light Festival is one of the many happenings that showcases the Old City, for free.

You need at least one day – if not three — to visit Jerusalem’s most famous holy sites located inside the Old City walls. There’s the Western Wall, Temple Mount, Dome of the Rock (Al-Aqsa Mosque), Church of the Holy Sepulcher, Hurva Synagogue and Via Dolorosa, among others.

Take your time walking from site to site by getting lost in the alleyways of the shuk, taking in all the shops selling souvenirs, pottery, olive-wood mementos, clothing and food.

Each quarter of the Old City – Armenian, Jewish, Christian, Muslim – has its own ambiance and vibe. As there’s a story behind practically every stone of the Old City, this is the place to get familiar with history, theology and archaeology.

Or take yourself off the beaten path to the Austrian Hospice and enjoy the best rooftop view in the city.

Dozens of free festivals take place around the Old City throughout the year, including the Light Festival, Knights in the Old City and Sounds of the Old City, to name just three. 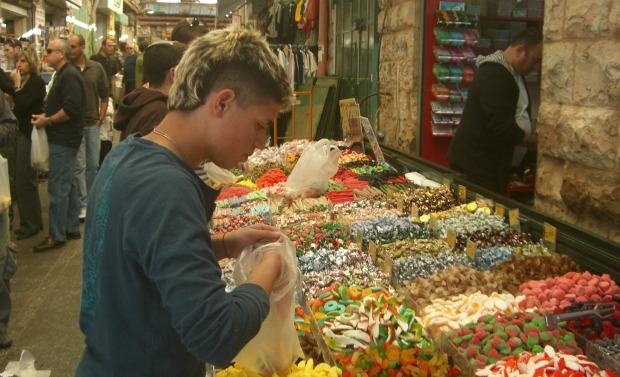 Open up your senses: it’s time to see, smell, taste, feel and experience the real Jerusalem. The Machane Yehuda Market is always an exciting place to go.

It’s much more than fresh fruit and vegetables. There’s also cheese, wine, halva, exotic spices, coffee, baked goods and ethnic dishes. In fact, the fare mirrors the city’s residents, who hail from a hodgepodge of countries.

This is the place to feel the people, food and customs of Jerusalem. 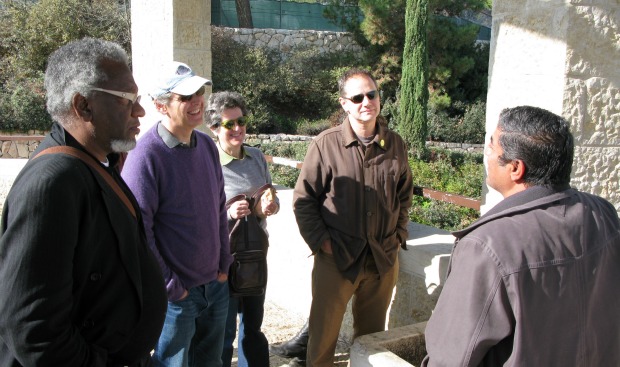 A group of American artists visiting the Goldman Promenade.

The Haas (Haz), Sherover and Goldman promenades in the Armon Hanatziv neighborhood of Jerusalem offer the best panoramic views of the city and beyond. The three promenades are adjacent to one another and run from Jabal Mukabaar Park in the east to Abu Tor in the north, just above the Jerusalem Peace Forest.

The United Nations Middle East Headquarters is located at the end of the Goldman Promenade, in the former palace of the British High Commissioner.

Tourists and locals can be found walking along these paths any time of the day. This is the place to catch the best views of the Old City, parts of Western Jerusalem and the Judean Desert. 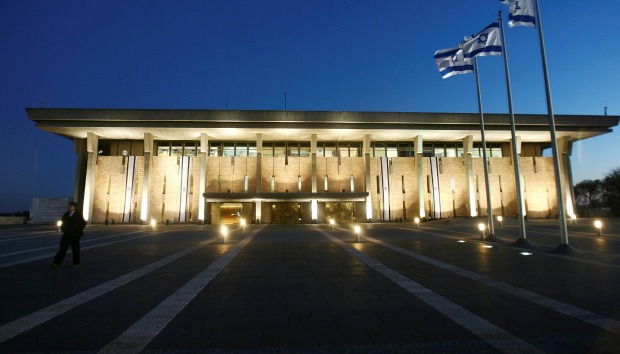 View of the Israeli Knesset. Photo by Flash90

You’ve read about Israeli lawmakers and their policies in the media. Now take a free guided tour of Israel’s Parliament at work. You’ll get to see the inner workings of the building, hear about the role and responsibilities of the Knesset, see the art on its walls – including famous tapestries by Marc Chagall – and view the Israeli Declaration of Independence.

Tours take place on Sundays and Thursdays and are offered in English, Hebrew, Arabic, Amharic, French, Russian, Spanish and German. 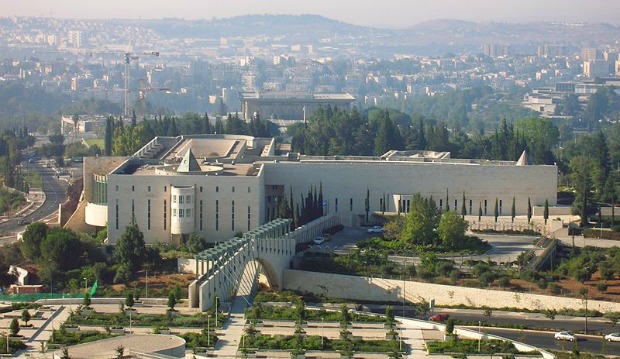 Dubbed “Israel’s finest public building” by The New York Times, the Supreme Court of Israel is a highlight of modern Israeli architecture. Donated to Israel by philanthropist Dorothy de Rothschild and opened in 1992, the building is a blend of styles and offers architecture references to the Herodian, Hellenistic, Crusader, Greek Orthodox, and even British Mandate periods.

Free guided tours in English (Sunday through Thursday) at noon. 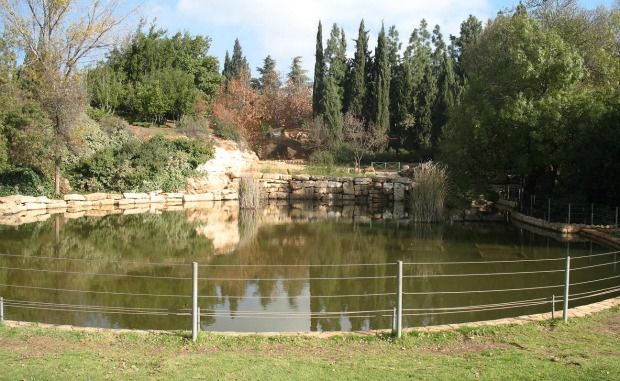 Lake at the Wohl Rose Park.

One of the sweetest-smelling gardens in the country, the Wohl Rose Park sits in the middle of the government complex in Givat Ram, at the foot of the Supreme Court and directly opposite the Knesset.

Built in 1981, this 19-acre public garden boasts 15,000 rose bushes representing more than 400 varieties. It was named one of the 11 most beautiful rose gardens in the world.

Or try the Teddy Park across from the Jaffa Gate. This new park features a sound-light-water show (from 8 p.m.) and a fountain for kids to play in. There’s also a visitor’s center that tells the story of the development of modern-day Jerusalem. 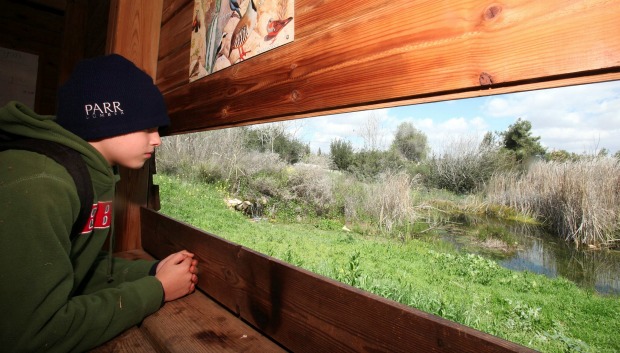 Bird-ringing at the Jerusalem Bird Observatory. Photo by Yossi Zamir/Flash90

Every year, one billion feathered visitors migrate through Israel. The Jerusalem Bird Observatory has a strategic location on this route and that’s exciting news for the ornithologists among us.

Located between the Knesset and the Supreme Court, the observatory is a research and eco-tourism project that teaches visitors about avian culture. It was established in 1994 by the Society for the Protection of Nature in Israel and serves as the national bird-banding center. The public is invited to take part in spring and fall ringing activities. 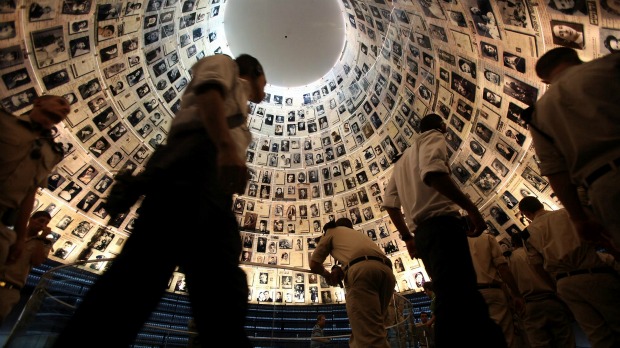 Hall of Names at Yad Vashem. Photo by Yonatan Sindel/Flash 90

More than one million visitors per year walk through Yad Vashem, Israel’s living memorial to the millions murdered in the Holocaust. 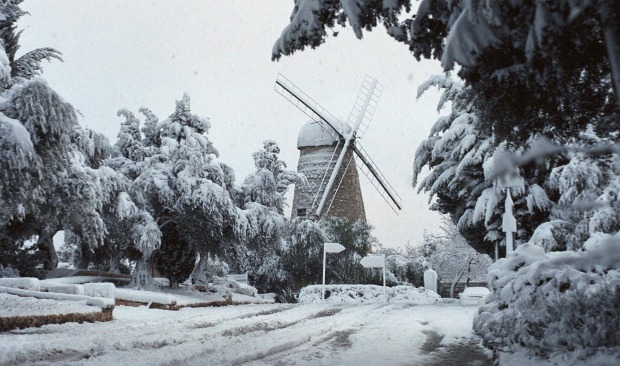 Standing 18 meters high, this is a Jerusalem landmark you cannot miss. It was built in 1857 to power a flour mill. It’s located in the picturesque neighborhood of Mishkenot Sha’ananim, the first Jewish neighborhood built outside the Old City walls in 1860.

In 2012, the windmill was restored with a new cap and sails, and it turns in the wind once again. It also serves as a small museum dedicated to the achievements of British Jewish banker and philanthropist Moses Montefiore – for whom the windmill is named. 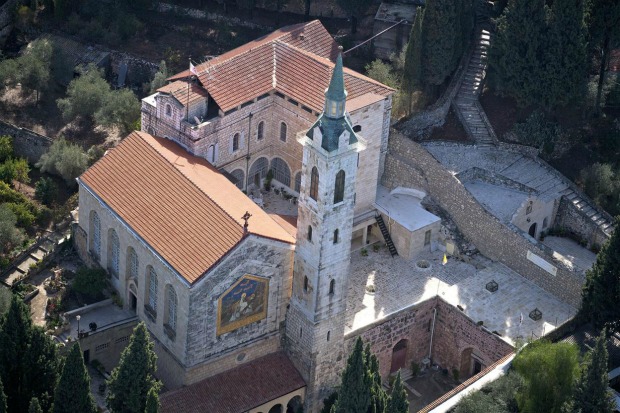 Church of the Visitation, Ein Karem. Photo courtesy of the Tourism Ministry

Take a stroll around Jerusalem’s artsy and charming Ein Karem neighborhood. A favorite weekend spot for locals, tourists have the benefit of enjoying this area during the week when it’s much quieter as well.

Ein Karem is a pilgrimage site for many Christian visitors because, according to tradition, this is where Elizabeth, the mother of John the Baptist, miraculously became pregnant. Tradition teaches that this is also where he was born. Mary’s Well is located here, too.

Wind your way down this neighborhood’s narrow lanes, past old-style buildings with hidden courtyards. It’s located adjacent to the Machane Yehuda Market.

The neighborhood has a bohemian ring to it and boasts a mixed population of ultra-Orthodox and artsy folk.

There are dozens of small synagogues throughout the neighborhood and crowds from all over the country gather here during the 40 days of repentance between the Hebrew month of Elul and Yom Kippur. 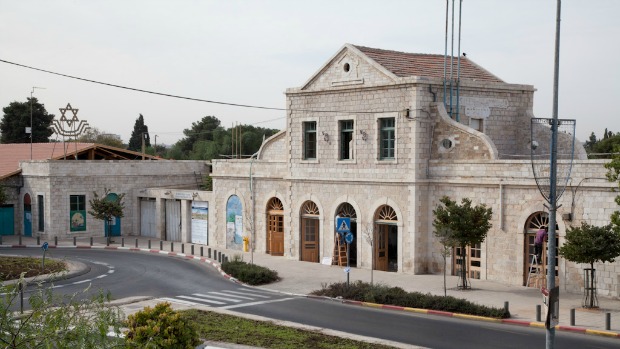 The newest culture and culinary hub in the capital has given the 130-year-old Israel Railways property a totally new life. Similar to the Tahana in Tel Aviv, the Old Train Station in Jerusalem is already becoming one of the city’s top hotspots.

Gourmet restaurants, pubs and cafés alongside vintage locomotives, and exhibition spaces for musical, literary and artistic events, make this the place to come for entertainment.

Come on a Friday when the street really fills up with people and activity.

The centrally located Liberty Bell Park is a great place to let your kids run free. As its name would suggest, the park contains a replica of the Liberty Bell, the iconic symbol of American independence, located in Philadelphia, Pennsylvania.

The Train Theater for children (entry fee to see a performance) is located at the northern end of the park. 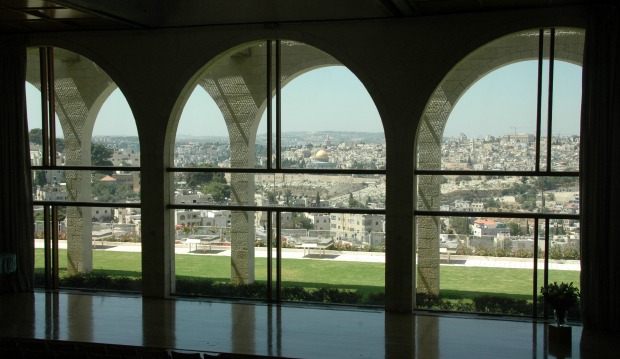 View of Jerusalem from the Brigham Young campus. Photo courtesy of the Tourism Ministry

You do not have to be Mormon to visit this extraordinary place. Save a date on your busy touring schedule to come up to the Brigham Young Mormon University’s Jerusalem Center for Near Eastern Studies on Mount Scopus.

Visitors are given a free guided tour of the gorgeous campus, which includes a short video and live 10-minute classical music performance on a pipe organ – with 3,165 pipes, said to be the largest in the Middle East.

Every Saturday throughout the year, the Jerusalem municipality hosts free guided walking tours of the city. Licensed guides lead the English-speaking tours around different neighborhoods, along interesting streets, through the Old City, and to historical structures. Check to see which route suits you best before joining a the three-hour informative walk.

Taking its cue from the Nahalat Binyamin craft fair in Tel Aviv, the Bezalel arts and crafts street fair serves up creativity, charm and friendliness every Friday between 10am and 4pm.

The fair started in 2009 and has become a weekly hangout for young families, couples, tourists and artists.

Take a stroll past the different stalls and catch a glimpse of Israel’s creative community’s output.

The market is set up between Bezalel Street and Shmuel HaNagid Street, next to the old home of the Bezalel Academy of Arts and Design, Israel’s national art school. 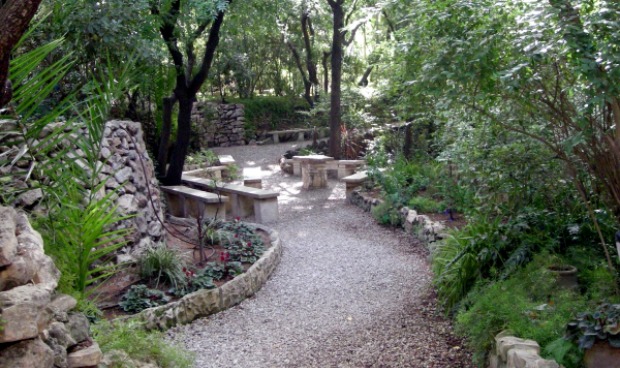 A quiet place for reflection.

One of the city’s best-kept gardens, the site just outside the Damascus Gate is a quiet refuge from bustling East Jerusalem outside.

Believers say the Garden Tomb is an alternative site to the famous Holy Sepulcher – and cite passages from the four Gospels to prove it.

Regardless of your faith, the garden – run by the Garden Tomb (Jerusalem) Association, a Christian non-denominational charitable trust based in the United Kingdom – is a quiet place to sit and reflect.

The Israeli Tour Guides’ Association even nominated the Garden Tomb as one of the best tour sites in Israel.

Going to Tel Aviv? Check out ISRAEL21c’s 18 Cool Things to Do in Tel Aviv for FREE.

Going to Haifa? Check out ISRAEL21c’s 18 cool things to do in Haifa for FREE.