Photo courtesy of Israel Ministry of Tourism
The famous marketplace of Daliat el-Carmel.

Most people go to the Galilee Druze village of Daliat el-Carmel to sample ethnic cuisine or bring home bargains from the bazaar. But the town, located between the bucolic wine country in Zichron Yaakov and the high-tech hub of Haifa, is also rich in history that Ragaa Mansour is eager to share.

“This is the southernmost Druze town in the world and the largest in Israel,” says Mansour, a member of the Druze sect that is based mainly in Lebanon and Syria.

Two years ago, Mansour opened the Carmel Center for Druze Heritage, a hands-on living museum dedicated to educating visitors about the Druze people, religion and culture through exhibits on dress, foods, crafts and industries.

The religion started in 11th century Egypt as an offshoot of the Islamic Ismailia Movement. Its secret tenets, known fully only to the clergy caste, are based on the Koran and other Arabic, Persian, Greek and ancient Eastern philosophies.

But even if the faith is a bit of a mystery, the culture is known for its friendly openness and for its members’ loyalty to Israel. The Druze have served in the Israel Defense Forces since 1956. Daliat el-Carmel has a Druze military cemetery and the Beit Yad Labanim memorial site for fallen Druze soldiers. 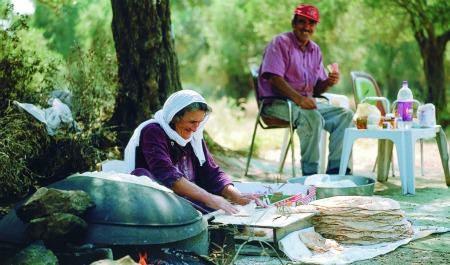 Daliat el-Carmel’s residents welcome frequent Israeli weekend travelers, as well as tourists from abroad, who come to explore the region’s cuisine and learn more about a history that also resonates with Jews and Christians for its significance in the life of the prophet Elijah.

“The Druze are very polite and really welcome tourists no matter if they are English-speaking, German-speaking or Hebrew-speaking,” tour guide Akiva Oren tells ISRAEL21c.

Daliat el-Carmel, which means “Vine of the Carmel,” was established in the 17th century by Druze émigrés from Lebanon. In 2003 it merged with Usfiya to its immediate south. The combined municipality is officially called Carmel, but natives still distinguish between the two as their makeup is slightly different.

“Usfiya has 10,200 people and is about 17 percent Christian and three percent Muslim, and also there are some Jewish houses,” Mansour tells ISRAEL21c. The 13,000 residents of Daliat el-Carmel are virtually all Druze. 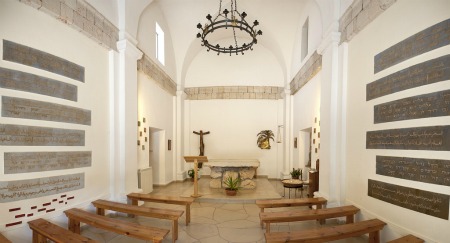 Photo by Mordagan/Israel Ministry of Tourism
Muhraka, a Carmelite Monastery, sits high on a mountain on the main road of Daliat el-Carmel.

There are also Druze villages scattered throughout the Golan, farther to the northeast by the Syrian and Lebanese borders. Oren recommends exploring these villages especially on weekends, when Daliat el-Carmel’s main street is crowded with traffic.

What many of the hordes of visitors are seeking is ethnic cuisine. Mansour says staple dishes include stuffed grape leaves, squash casseroles, mansaf (lamb cooked in a sauce of fermented dried yogurt and served with rice or groats), mujadara (a lentil, rice and onion pilaf), bulgur pilaf and fresh pita sprinkled with za’atar and hummus.

If you can’t wait to find an eatery, you can get some of these goodies on the go, courtesy of villagers who bake and sell pita bread at roadside stands.

A bit of Israeli trivia

Mansour says few people know that the poet Naphtali Herz Imber put the finishing touches on his poem “Our Hope” while working as a secretary for Sir Laurence Oliphant, a British Christian Zionist, at the Oliphant House in Usfiya in 1882. That poem is the basis of Israel’s national anthem, Hatikvah.

Tours are available at the Oliphant House, an English-style mansion on a hill overlooking the Mediterranean. It houses an art collection documenting the signing of Israel’s peace treaties with Egypt and Jordan. This is also where the soldiers memorial is found. 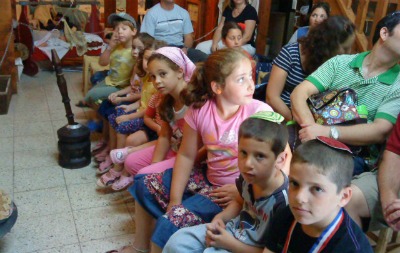 Photo by Ragaa Mansour
Groups of tourists at the Carmel Center for Druze Heritage.

The Muhraka, a Carmelite Monastery on a mountain on the main road of Daliat el-Carmel, was built where the Prophet Elijah is believed to have battled with the followers of the pagan god Ba’al. Nearby is the cave where the Bible records that Elijah was fed by ravens while hiding from the wicked Queen Jezebel. The grounds of the monastery include a grove and garden, and the rooftop is a popular observation point.

No matter from which direction you’re driving into Daliat el-Carmel, says Oren, be prepared for beautiful scenery. Even in Usfiya, which is where last year’s devastating fire began and burned down much of the Carmel forest, he promises breathtaking vistas.

Oren likes to take tourists on jeep excursions in the area, and it’s also possible to press olives, ride horses and go on nature walks.

For those staying in the village, numerous B&Bs are situated in the village and offer warm Druze hospitality. Some of the residents also welcome overnight guests in their private homes.

The main road and the alleyways leading from it contain many old houses of worship, historic buildings, olive oil presses, weaving mills and art galleries. At the end of one of these lanes is a shrine to Abu-Ibrahim, who was among the first emissaries sent out by the Egyptian Fatimid Caliph Al-Hakem in 996 CE to proclaim the Druze faith. Modern Druze brides and grooms come to have their picture taken in front of the arched new prayer hall adjacent to the shrine.

But the jewel of Daliat el-Carmel is its old marketplace in the heart of the village.

“You can find everything here in one spot,” says Mansour, “and the market also has goods imported from the East. That’s why so many people come here on the weekends.”