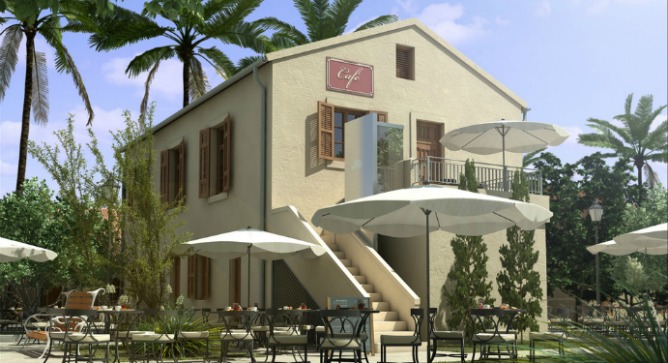 The old Templar buildings will be preserved in the Sarona project.

When the first German Templer settlers arrived at Sarona in 1871, they brought with them a work ethic, architecture and culture new to the Holy Land.

Nearly 140 years later, the grounds of their original agricultural colony are being converted into Ganei Sarona (“Sarona Gardens”), Israel’s first “lifestyle center” — a combination of high-end shopping with quality restaurants, cafés, nightlife and manicured parkland surrounded by residential and commercial high-rises in the thumping heart of modern Tel Aviv. Yet the original colony’s unique character will be meticulously preserved.

“It’s going to be an active, important part of the city,” Gadi Roitman, head of management and administration at Ganei Sarona, tells ISRAEL21c.

“Historically it has great importance. It’s also in a great central location.”

Ganei Sarona will be far more than another mall, says Roitman. He promises a unique added value to the shopping experience.

The sturdy red shingle-roofed stone buildings had inevitably decayed over the decades, and a comprehensive (and expensive) restoration process began about a decade ago.

“The preservation was carried out under extremely stringent conditions, so as to preserve or reconstruct the original structures,” says Roitman. “Every door frame had to be approved; every detail was meticulously noted.”

A total of 33 mainly two-story structures have undergone an overall refurbishment, from reinforcing their foundations to restoring original wall paintings. Five of the buildings had to be physically relocated – a delicate process that demanded considerable resourcefulness.

Most of the buildings will be used for commerce – fashion and accessory stores, boutiques, restaurants and cafés – and the others for a visitors’ center, university classrooms and two museums devoted to eyeglasses and the Sarona project. The original olive oil press has been preserved.

But the plan goes much further: Ganei Sarona will be a car-free complex surrounded by more than a dozen high-rise commercial and residential buildings, and linked by an underground road with 10,000 subterranean parking spaces.

“Four of the tower blocks already exist, including three on nearby Ha’arba’a Street,” says Roitman. “Another three residential high-rises and two office blocks are under construction – they should be opened in 2014 — with another one and a hotel due to start soon. Eventually there’ll be 20 towers, all between 30 and 40 stories high, which will form a horseshoe shape with the park in the middle.”

Accessibility will be a major factor, he says. “Eventually the whole complex will be surrounded by a 1½-kilometer-long underground ring road, with 17 junctions and 20 parking areas on seven levels. It’ll all connect like LEGO.”

Another innovation: The whole traffic and parking system will be overseen from a central computerized control room.

Sarona, it seems, is again ahead of its time.

Believing they were promoting the second coming of the messiah, members of the Templers, a breakaway Protestant sect, settled part of what was then the Ottoman Empire in the late 1800s. Their diligent, pious communities sprouted in Haifa, the Galilee, Jerusalem and near the ancient port of Jaffa, almost 40 years before Tel Aviv was founded.

For eight decades the villages flourished in the Holy Land. The tenacious Germans paved new roads, introduced European agricultural techniques, and opened hospitals, hospices and banks. The Templers were even the first to market their oranges under the Jaffa label.

But their nationalism – several were members of the Nazi party – led to their internment and eventual deportation to Austria by the Mandatory British government.

Israel, which signed a compensation settlement for the Templers’ lost property, used the empty colony as its temporary seat of government — including the fledgling state’s first mint — during the 1948 War of Independence.

For the ensuing decades the buildings were occupied by the army’s Kirya headquarters, which remains, and various government offices and ministries.

“It was very difficult to get [the government offices] to relocate elsewhere, despite all the agreements and financial incentives. Only the Israel Broadcasting Authority’s headquarters remains now,” says Roitman.

Sarona’s first new tenant, a satellite branch of the Haifa-based Technion-Israel Institute of Technology, will begin operations in October using temporary access to its three buildings.

“We plan to open the first stage of the Ganei Sarona project in the first quarter of 2013,” says Roitman. “It’ll be a gradual process, as the construction work advances.”

“There’ll be galleries, a spa, restaurants, cafés and bars, but it won’t be too upscale. There’ll be something for everyone: bicycle paths, a music garden with live performances, two ecological ponds full of fish and plenty of natural flora. The park will recreate the original colony,” says Roitman.

In particular, he notes, the public spaces will be given over to a constantly changing lineup of events, from rotating concept markets to cultural events. There will also be a children’s play area, safely distant from any vehicular traffic.

And all this, says Roitman, while maintaining retaining the Templer colony’s charming original character.

“It’s going to be a very special place,” he says.

UNCOVER ISRAEL - Get the ISRAEL21c
Weekly Edition free by email
Sign Up Now!
Bring Israel's story to life.
Millions of people around the world rely on us to gain a deeper understanding of Israel. We are the trusted source for original content you won't find anywhere else.
You can make a difference. Donate today to support journalism that brings Israel’s story alive.
SUPPORT ISRAEL21c
Read more on:   Travel, See Israel, Tel Aviv, Templar colony, Sarona