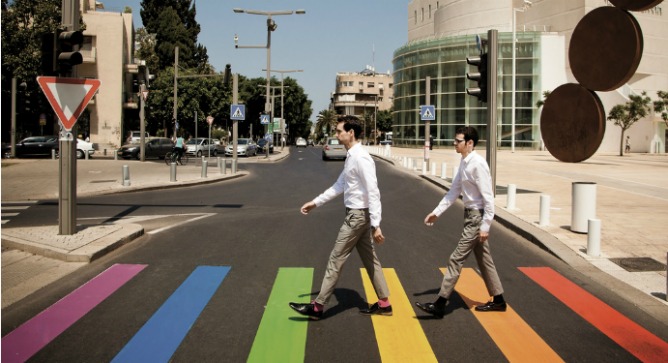 In a spoof on “Abbey Road,” The Young Professionals created a buzz for TLV Gay Pride Week.

Walk down any street in Tel Aviv and it would be hard to miss the fact that Gay Pride Week is here. There are rainbow flags everywhere and colorful signs announcing Pride Week events in the “non-stop” city.

Music, dance, theater, beach parties, clubbing, drag shows, family-oriented picnics and other special events are all on the roster.

The parties begin June 1, with the main event a week later.

And though other cities around Israel will host their own gay pride events throughout the summer, Tel Aviv’s theme this year is about connecting with the rest of the country.

“The message that we chose this year actually casts the spotlight outside the city, on the periphery and the periphery’s connection with Tel Aviv as Israel’s secular and gay capital,” said City Councilman Yaniv Weizman, the mayor’s advisor on gay community affairs. “Most of the homosexuals, lesbians and transgenders who currently live in Tel Aviv were not born in the city and have strengthened our pride by coming from many places.”

“Pride is not only in Tel Aviv,” adds Adir Steiner, coordinator of city pride events for the municipality. “Gay people are all over the country. We are everywhere.”

With gay pride events across the globe continuously, it’s not a given that foreigners attend one parade or another in a different country. But local organizers are expecting an upsurge of tourists to join in Tel Aviv’s festivities after the city was chosen as the World’s Best Gay City earlier this year.

Last year, some 100,000 people took part in the Pride Parade. Tour operators and city officials say some 20,000 of those participants will be foreigners.

“We believe that when tourists come to a country and give a chance for the people of that country to show themselves, then diversity can open people’s minds and hearts from both sides,” Steiner tells ISRAEL21c. “This is why we do it.”

The pride campaign received an added boost for tourism when the Queen of Pop announced that she’d be kicking off her world tour in Israel.

Gay tour guide Russell Lord told ISRAEL21c that Madonna’s concert on May 31 has been a big draw for tourists to either come earlier or stay later while traveling to Israel. 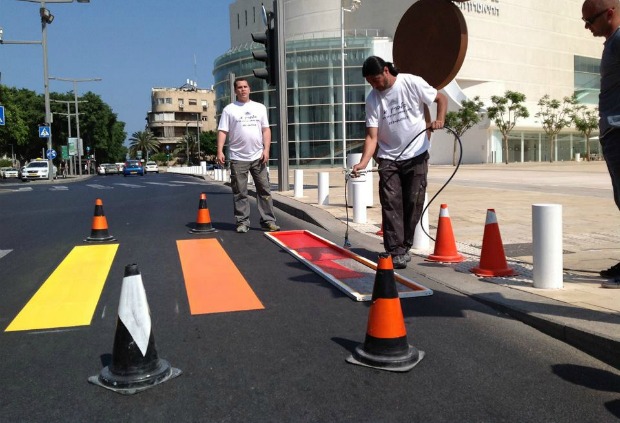 Tel Aviv painted its crosswalks in rainbow colors as a prelude to Gay Pride Week.

“I’ve got people coming in from Canada, the US, Germany, Holland — even Jordanians,” he reports. “They’re coming for both Madonna and Pride.”

And the beach, of course.

Throughout the week, Hilton Beach – which is the unofficial gay beach in Tel Aviv – will be decorated with rainbow flags and will host top deejays playing chill-out music.

To advertise the upcoming Pride Parade, the Tel Aviv Municipality painted one of the city’s main crosswalks in rainbow colors and posted a photo of the Israeli electronic duo The Young Professionals posed in the positions of The Beatles’ “Abbey Road” album.

By law, the city had to repaint the crosswalk white again, but the photo has continued to create a buzz ahead of TYP’s performance at the main event on June 8.

Other headliners at the beach parties include Offer Nissim and Dikla and Korin Allal, among other local deejays.

“There is no one must-do or must-see,” says events coordinator Steiner. “The whole week has a lot of options. For people who like performances, there’s dance and theater every evening at the Gay Center in Gan Meir Park; there are also art exhibitions featuring works by gay artists; party animals have at least three or four parties to choose from every day; there are family-oriented activities at the center; drag shows; there’s always something to do. It really depends on what each person is looking for.”

But the one event Steiner recommends for everyone is the parade on June 8. The day begins at Gan Meir in Tel Aviv with a big happening at 10am. At 1pm, the parade begins, and makes its way to Gordon Beach for an enormous beach party.

“Our Pride Parade is a party where people are not just standing on the side but they are part of the pride,” says Steiner. “In many places in Europe, for example, people look on from the side while the floats go past. Here, there are floats but they’re not watching the celebration. They are the celebration.”

UNCOVER ISRAEL - Get the ISRAEL21c
Weekly Edition free by email
Sign Up Now!
Bring Israel's story to life.
Millions of people around the world rely on us to gain a deeper understanding of Israel. We are the trusted source for original content you won't find anywhere else.
You can make a difference. Donate today to support journalism that brings Israel’s story alive.
SUPPORT ISRAEL21c
Read more on:   Travel, Experience Israel, Tel Aviv, Culture, gay pride