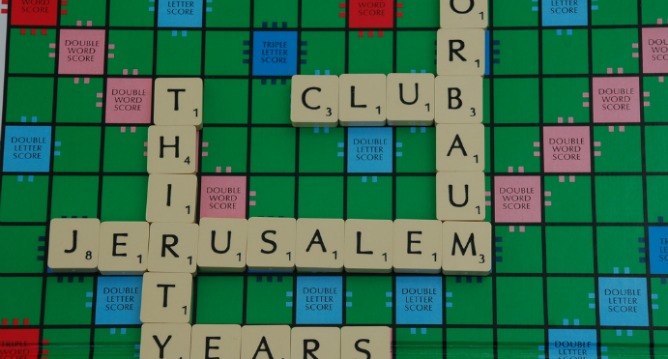 The club was started in 1983. Photo by June Glazer

S-E-T-T-E-E: The word is worth seven points. I put the tiles down on the board wistfully: If only I had an additional S. Then I’d rake in 50 points over and above the value of the letters — the regulation bonus for a “bingo,” using all seven tiles in one turn.

Scrabble. It’s a worldwide phenomenon with a thousand clubs, millions of players, and international tournaments around the globe. Ask any serious player at the Sam Orbaum Jerusalem Scrabble Club what word he or she is most proud of ever playing, and eyes twinkle.

“Orgasmic,” says Pamela Loval with a roll of her eyes. When I ask her how many points she earned with that one, she demurs. “A lot,” she says through a peal of laughter.

It is Tuesday night, the carved-in-stone time of the week when between 50 and 60 Scrabble aficionados gather on the third floor of the Beit Ha’am Municipal Library to match wits over their favorite game.

Most of the players come from the Jerusalem area, but Judy Segal and Chani Katz, for example, drive in from Petah Tikva, more than an hour away. Elaine Zaltzman makes the trip in from Karnei Shomron, a ride of about an hour and a half.

This is my first time at the club, my first time playing the game competitively. I’m strictly a social Scrabbler, here to write about the club’s upcoming 30th anniversary for ISRAEL21c.

‘Scrabble is my baby’

Competitive Scrabble, played between just two people — and with its chess clocks (each player has 25 minutes in which to make all plays), penalties (for going overtime, for incorrectly challenging an acceptable play, for getting caught making an unacceptable play), and rankings — has always seemed too intense for me.

Opponents sit face-to-face at library tables on either side of a narrow aisle, playing and chatting. While I survey the room, my opponent makes WEN off of SETTEE, forming ES and NE in the process for a total of 16 points. I’m flummoxed — I never heard of the word “wen.” And “ne?” What is that? I decide to keep my ignorance to myself and do not challenge her.

Sam Orbaum, in whose memory the Scrabble club is named, founded the group 30 years ago this April with Sara Schacter who, still an avid player at age 97, says she has missed only one Tuesday night Scrabble soiree in all these years. It was just this year when, after a raging snowstorm, the roads were too icy to leave home. 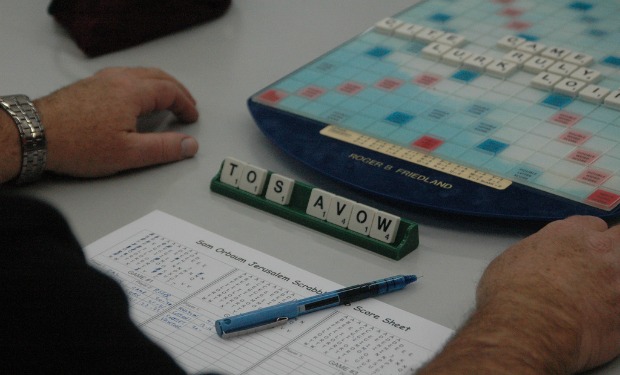 Club director Roger Friedland in the middle of a match. Photo by June Glazer

“Scrabble is my baby,” Schacter says during a break after a game in which she scored 358 points. A social Scrabbler in her youth, when she made aliyah to Jerusalem from London in 1983 she looked to join a Scrabble club as a way to make new friends, only to discover that no such club existed in the capital city.

Then, she saw an ad announcing a countrywide Scrabble tournament in Tiberias and decided to attend. A young Sam Orbaum, newly arrived from Canada and studying hotel management at the Tadmor School in Herzliya, was its organizer. Their meeting was kismet.

“I asked him if he thought there was enough interest to establish a Scrabble club in Jerusalem, and he suggested I put a notice up on the tournament bulletin board and see. I did, and 16 people responded,” Schacter recalls.

Orbaum agreed to inaugurate the club and under his leadership it grew to become what is purportedly the largest regular Scrabble gathering in the world. “No one has ever come forward to dispute our claim,” says Roger Friedland, a club member since 1997. He took over as director after Orbaum died from cancer in December 2002 at the age of 46.

“Sam was a Scrabble addict,” Friedland attests. “He could play two, sometimes three games simultaneously and also kibbitz with people and write down scores. All this, and he maintained a sky-high average.”

Orbaum won the club title many times, and the National Scrabble Championships in 1995, going on to represent Israel in the World Championships that year in London. 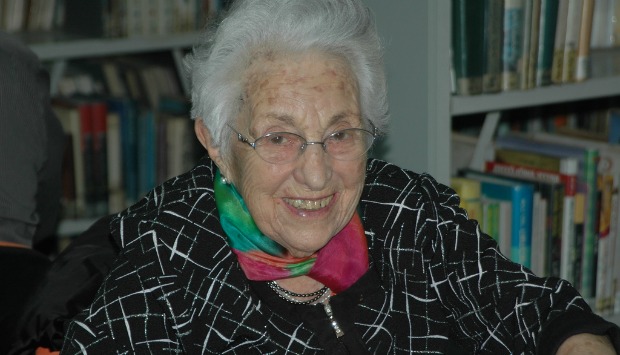 “He was very gifted,” Schacter agrees, remembering how, when the club took off, Sam quit his studies and went to work as an advertising copywriter at the Jerusalem Post so he could be close by. “He worked his way up to writer, then editor, and finally a columnist,” she recalls. He also published four books.

“People here are totally hooked, both because of the game and the social aspect. We’re one big family,” says Wendy Elliman, a regular player who is Sam’s ex-wife and the mother of his triplets. “If you’re going away, you go on a Wednesday and come back on a Monday. People even miss weddings for this,” she says.

Over the years, the club has welcomed many visitors, including East Jerusalem Palestinians, Nigerians, Gambians, Latin Americans and Filipinos. Many of them will be invited to the celebrations marking the club’s pearl anniversary, beginning with a gala dinner April 11.

Following the dinner, a “fancy cake and champagne” evening is planned at the library, topped by a “Scrabble food evening” at which foods that make unusual Scrabble words will be featured.

Which foods, I wonder. But, just then my opponent puts down a bingo, EXPIATE, on a triple-word score off of NAOI and racks up 124 points for a running tally of 377. That gets my attention—I trail behind with 188 points and realize I’ll never catch up.

Still, I’m happy. People are friendly and I’m having a good time. And there’s always next week.