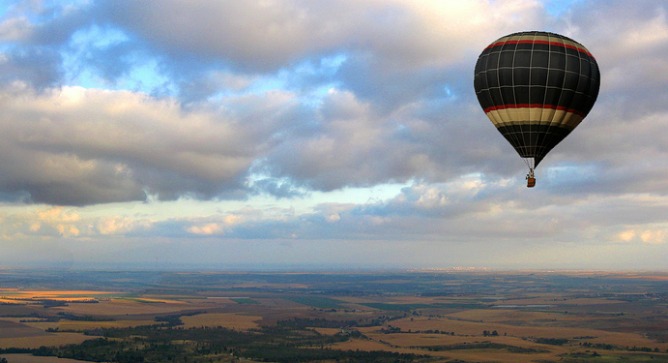 A unique way to see Israel. Photo courtesy of SkyTrek

Hitchhiking in Nevada after his Israeli army days, Amir Shemer was picked up in a four-wheel trailer hauling a hot-air balloon. Later, while traveling in Africa, the shadow of a passing hot-air balloon woke him up one morning. “Balloons were all over the place somehow,” Shemer tells ISRAEL21c.

This colorful and adventurous way to see Israel from above is gaining fast in popularity among both Israelis and foreign visitors. During the weeklong Sukkot holiday in the autumn, there are now two annual hot-air ballooning festivals to choose from.

Most flights in Israel end with a champagne toast or breakfast, so it is not surprising that many Israelis are willing to spend roughly $250 per person to celebrate a special occasion in the air. Marriage proposals are a frequent occurrence aboard Israel’s hot-air balloons, owners tell ISRAEL21c.

Shemer, who received his pilot’s license at a school in Utah, worked for three other hot-air balloon companies in Israel before launching his own.

“I grew up in a family where everybody skydives or rock climbs or surfs,” Shemer relates. Hot-air ballooning with a professional pilot is a tame activity by contrast, safe enough for just about anyone over age six. But the wind’s unpredictability adds an element of chance.

Inflating the balloon is part of the adventure. Photo courtesy of Over Israel.

“When you fly a balloon, you need to give up some control because it has no steering wheel or brakes. There is a famous phrase that when you don’t know where you’re going, the road leads itself,” Shemer says.

Manned hot air ballooning began in France in 1782. The balloon, also called an “envelope,” lifts passengers in its attached basket with the aid of trapped air heated by an open flame powered by propane gas. Balloons fly only when there is good visibility and a wind of less than 10 knots, with the pilot controlling the altitude and direction by entering air masses moving in different directions.

“Some pilots are floaters and some are pilots,” explains Shemer. “Floaters go up and let the wind take them where it likes. Pilots can navigate the balloon using the winds to go where they like.” 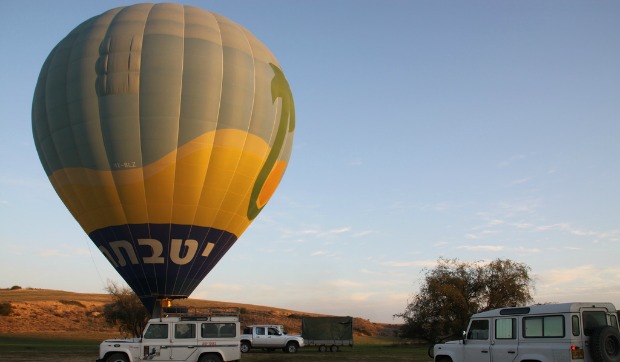 Rides often begin at dawn when conditions are calm. Photo courtesy of Over Israel

Companies also offer tethered flights, where passengers float in the balloon basket 100 meters (328 feet) in the air while anchored to the ground in a scenic spot such as the shores of the Dead Sea or Sea of Galilee.

“This is a great and affordable way to get in the air above the Israeli desert at the South or the amazing Gilboa Mountain area at the North,” says Almog Amir of Touch the Sky, based in Kibbutz Beit Hashita at Mount Gilboa. “You can really see half the country, from the Mediterranean Sea in the west to the Gilead mountains of Jordan in the east.”

Passengers are in the air for about 60 minutes, but the entire experience lasts four to five hours because it begins with inflating the balloon with the staff, lifting off at sunrise or sunset, gliding at an altitude of up to 2,000 feet and ending with an optional gourmet picnic.

Depending on their size, hot-air balloons can carry four to 18 people. Rize Up, at Moshav Betzet in the Jezreel Valley, can send a group of about 30 up in the air simultaneously in its three balloons. It also offers illuminated nighttime tethered “Fiesta Flights” for large groups, and a workshop where participants can construct and launch miniature hot-air balloons made of colored paper.

Symbol of freedom and peace

Moran Itzckovich founded his hot-air balloon company, Over Israel, based on a dream in which he saw a giant balloon. A couple of months later, he took off for Utah to get certified as a pilot.

“I bought a used balloon and shipped it to Israel and came back, but it took about two years till that balloon was up in the air,” says Itzckovich, now 32. The company started in 2003, and has flown about 3,000 passengers so far this year.

“A balloon is a symbol of freedom and peace,” he says. “It’s very related to nature, it’s clean and it’s sexy.” 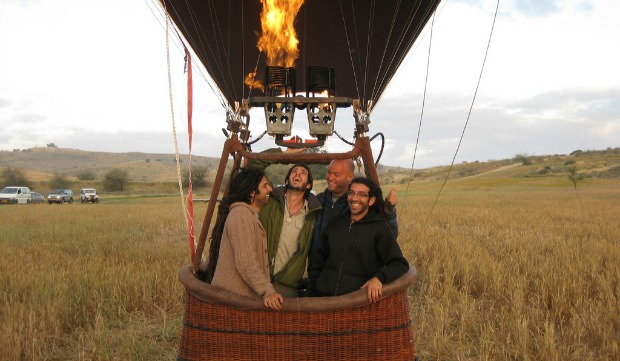 Depending on size, a hot-air balloon can hold four to 18 passengers. Photo courtesy of SkyTrek

It’s also quite eye-catching, which makes a hot air balloon a perfect canvas for promotional campaigns.

SkyTrek festooned its balloon at the Gilboa Regional Council’s recent hot-air balloon festival with a banner publicizing the Jordan River Village camp for seriously ill children. Actor Haim Topol rode in the basket with kids from that week’s camp session.

“During the year we hope to do some more events with them,” says Shemer. “The balloon in very much is synch with the idea of taking kids higher than they can imagine.”

UNCOVER ISRAEL - Get the ISRAEL21c
Weekly Edition free by email
Sign Up Now!
Bring Israel's story to life.
Millions of people around the world rely on us to gain a deeper understanding of Israel. We are the trusted source for original content you won't find anywhere else.
You can make a difference. Donate today to support journalism that brings Israel’s story alive.
SUPPORT ISRAEL21c
Read more on:   Travel, See Israel, Amir Shemer, SkyTrek