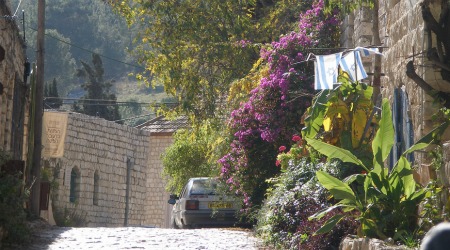 When Oreet Segal’s ancestors came from Romania to establish the farming town of Rosh Pina in the Upper Galilee, they schlepped along wooden boats. The newcomers figured on earning an income from fishing in the little river described by Segal’s great-great-uncle on an earlier pilot trip.

Alas, as soon as they laid eyes on it, they realized that the stream wasn’t a fisherman’s paradise. So the families found a creative use for the boats: They put them together to form the roof of the synagogue, whose main craftsman was Segal’s great-grandfather, Mordechai Katz.

This is just one of the quaint stories about Rosh Pina (Hebrew for “cornerstone”) that Segal, a licensed Israeli tour guide, loves to tell visitors. “You can still see the contour of the boats when you look up at the ceiling, which is painted blue to look like the sky,” Segal tells ISRAEL21c.

Though the founding families in 1882 had a rough time making a go of their Zionist enterprise, today the “mother of the Galilee settlements” is a thriving artists’ colony and gateway to many nearby cities of interest. Many bed-and-breakfasts and luxury boutique hotels are tucked among its restored stone houses, and at night its restaurants and pubs offer music and world cuisine. In all, about 400 guest rooms and 30 eateries are open for business in Rosh Pina. Many spa hotels and other accommodations are located not far away.

The clear, cool mountain air of Rosh Pina and the vistas it affords across the Golan Heights, Mount Hermon and Hula Valley — central to the Romanian immigrants’ decision to put down roots in the area — still are among the aspects that travelers enjoy most.

“There are a lot of places to stay here today, and the weather is beautiful with a high elevation, so it’s pleasant in the summer with a great view,” says Segal.

About 2,500 people live in Rosh Pina, which can be explored within a few hours.

Segal likes showing tourists the house where her father was born, as well as the synagogue and the mikvah, all authentic structures. “A lot of the original houses are there, just ‘yuppified’ and glorified,” she says, “including the home of the well-loved schoolteacher. When he passed away, they made a fancy memorial to him in the cemetery.”

Pop star Madonna even looked into buying one of these houses. She was interested in the town because she’d learned in her kabbalah studies that according to the Jewish mystical tradition, Rosh Pina is the site where the Messiah will first appear. 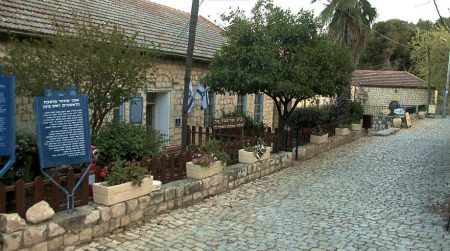 Photo courtesy Ministry of Tourism
At the restored site of the Rothschild offices, you can watch an audiovisual history of Rosh Pina.

The centerpiece of a tour in Rosh Pina is the building where the village’s early patron, Baron Edmund de Rothschild, installed clerks to oversee how his money was being spent. The building now houses a museum featuring an audiovisual presentation about the history of Rosh Pina. Outside, visitors can walk through the Baron’s Gardens, reportedly modeled on the grand gardens at Versailles.

Another landmark is the home of Prof. Gideon Mer, who in 1929 established a malaria research laboratory in Rosh Pina. His work gained worldwide recognition for stopping the malaria epidemic among new agricultural settlers in the region and beyond. The preserved house contains an exhibit of historic items from various periods, such as old plows, laboratory equipment and textbooks.

But Rosh Pina wasn’t well known until the late 1980s, says Segal, “when it became a haven for artists looking for inexpensive old homes.” Many of those homes have been turned into ceramic studios and art galleries.

Tour guide and local resident Akiva Oren likes to use Rosh Pina as a base for trips to nearby and better-known areas including Safed (Tzfat); Tiberias; Korazim National Park on the Sea of Galilee; Tel Hatzor National Park on the ruins of the biblical King Solomon’s summer palace; and the Hula Lake, which is a famous spot for bird-watchers.

“I take people for a few hours in Jeeps to see the north, which is really unique,” says Oren. “Rosh Pina is a good base for traveling in all four directions.”

Mulberries didn’t do the trick

Segal’s relatives were not the first Jews to try establishing a town on the slopes of Mount Canaan, which would later become Rosh Pina. In 1878, 18 religious Jews from Safed walked 90 minutes to this area, hoping to start farming with the help of three natural springs.

“They didn’t want to beg for money from European Jews,” says Oren. “They wanted to work the land as farmers and make their own living.”

But it wasn’t smooth sailing, and the adventurers’ hungry stomachs eventually forced most of them back to Safed. In 1882, as many idealistic Europeans began emigrating to their ancestral land in what is now called the First Aliyah, 40 families from Romania arrived and walked from the port to the town they named Rosh Pina. It was incorporated in 1953.

Slowly, the Europeans bought up land from Arab property-holders. Oren says most were only too happy to sell their plots since they needed money to bribe the authorities to keep their sons out of the Turkish army.

“My grandmother was five years old when they arrived, and she remembered living in hillside caves at the beginning,” says Segal. “The first thing they built was a mikvah and then small homes. They tried to be farmers, but didn’t know much about it.”

Despite financial assistance from Rothschild, the venture was plagued by difficulties that sent many of the original families packing.

First they tried planting mulberries to grow silkworms. Then they planted flowers to make perfume. Neither ideas panned out well, says Segal.

“They suffered a lot from diseases and from hostile neighbors, too. My great-grandfather, who was very tall with red hair and a red beard, rode around guarding the settlement on a big white horse. The Arabs called him Big Mottel.”

And so Rosh Pina remained what Segal calls “a kind of a forgotten backyard” until about a century after its founding. “It started getting a rebirth as people bought up houses to make B&Bs and galleries.”

It offers something for sports-lovers, too. A new 25-kilometer section of the Israel Bike Trail was just opened to cyclists this fall by the Keren Kayemeth LeIsrael-Jewish National Fund, and there are also trails for horseback riding and hiking.