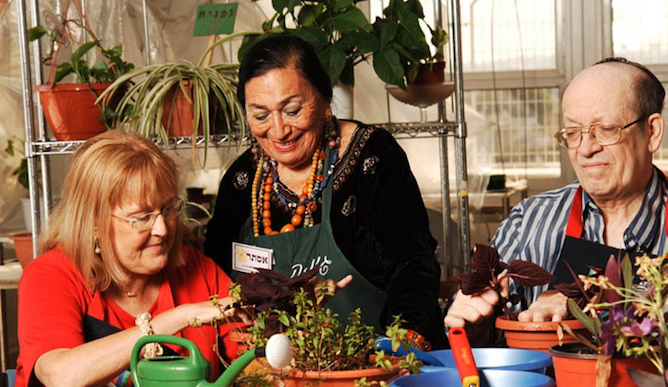 Gardening therapy is one of the services at Reuth Medical Center.

The German-born ladies who started a soup kitchen for destitute European refugees on the Tel Aviv beach back in the 1930s were Israeli innovators in their time. They went on to establish subsidized housing and finally a nursing home to tend their indigent elderly clientele.

“We are constantly evaluating the immediate needs in Israeli society in social welfare and healthcare,” says Deputy Executive Director Miriam Frankel. “With all the knowledge and experience we have amassed, we must continue to help others.” 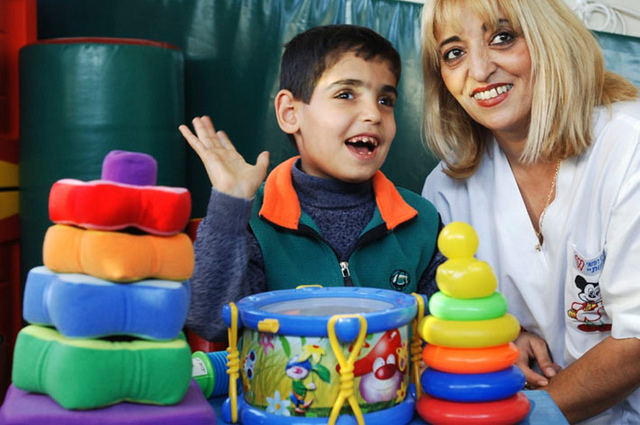 As diamond anniversary events began kicking off in Israel and the United States, ISRAEL21c toured Reuth Medical Center in Tel Aviv’s Yad Eliahu neighborhood. Established in 1961 as a 25-bed geriatric facility on the initiative of Reuth founder Paula Barth, it is now one of Israel’s three rehabilitation hospitals and the organization’s largest project.

In addition to 350 beds for rehab and chronic-care patients from infants to centenarians, plus outpatient clinics, the facility has implemented some unique programs under the direction of Dr. Nissim Ohana.

One newly remodeled rehab unit is the first in Israel to incorporate Cupron’s made-in-Israel antimicrobial copper-embedded surfaces and bed linens. Cupron successfully tested its textiles at Reuth before putting them on the market. 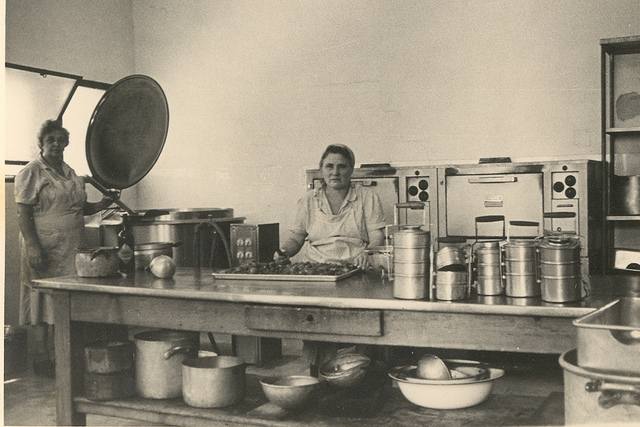 This vintage photo shows the organization’s origins as a soup kitchen.

“It’s the first total in-hospital experiment with Cupron in the world,” says Frankel, smoothing her hand along the sleek gray desktop at the nurses’ station. The special material also will be sewn into nurses’ uniforms for this unit.

Reuth Medical Center also houses the Agam Center for eating disorders, established at the urging of nurses in response to an unmet need; Open Door, a unique program on sexual health for young people with disabilities; and the Shikumon activity center for young stroke victims, run in partnership with the Ne’eman Foundation.

Staff rehab professionals suggested, and helped plan, a working model apartment right in the department. Here, rehab patients practice using adaptive gadgets – such as a one-handed vegetable slicer and a wheelchair-accessible washing line — that will help them function in the kitchen, bathroom and laundry room when they go home.

In 2011, the Israeli company Step of Mind opened a one-of-a-kind clinic at Reuth Medical Center. Physiotherapists learned how to use the high-tech Re-Step shoes to help patients relearn how to walk following strokes or other brain injuries.

“This program was developed in Israel, and people come worldwide to see how it works,” says Frankel, who works closely with Executive Director Alex Jacobi.

She adds that Reuth enjoys global professional exchange and accepts patients and volunteers from around the world. About 200 volunteers supplement the work of Reuth’s 1,000 paid staff members in its hospital and community programs.

A new program called Growth from Crisis is set to become an integral part of the hospital’s holistic approach, says Frankel. The goal is to help families of rehabilitation and chronic-care patients not merely cope with their trauma, but grow through the experience. Spiritual guidance will be part of the process.

“We don’t have a model to copy, because it’s groundbreaking,” says Frankel. “We’ll be learning as we go along, and we’re planning to publish our research.”

A three-year pilot for this initiative is supported by the family of Matan Badet, an 18-year-old who was severely brain damaged in a diving accident and hospitalized for 12 years at Reuth until his passing in 2012. 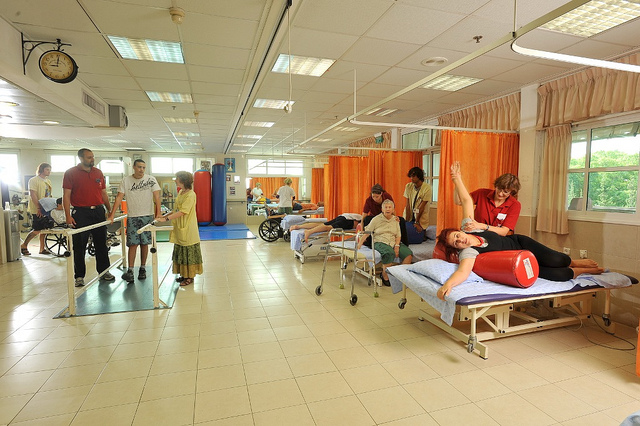 One of the first areas of the hospital to implement staff training for this new program will be the Weingarten Children’s Department.

The pediatric ward was itself an innovation, opened in response to requests from regular hospitals experiencing a shortage of beds for children who could never go home due to their need for lifelong acute care.

“There was no solution for children who will spend their lives in the hospital,” Frankel says. “We have had babies who have gone home from here, but they are the exception.”

Some patients suffer the effects of genetic diseases, while other babies were injured at birth or through accident or illness.

“We try to create as home-like an environment as possible for these severely disabled children and their families,” nurse Liana Achituv tells ISRAEL21c. “We make birthday parties and holiday parties for them, we have music and try to create a happy atmosphere.”

The hospital provides in-house adaptive special-education activities and arranges outings to areas such as the accessible Friendship Park in Ra’anana.

A major expansion plan will add another structure to the hospital, with three underground levels and six above ground, as well as a hydrotherapy pool and a lecture hall. A music therapy room was dedicated by Israeli singing star David Broza, one of several entertainers who performed at recent diamond anniversary celebrations in Tel Aviv and New York.

At the New York event, the American Friends of Reuth presented a Lifetime Achievement Award to Merav Mandelbaum, chair of Reuth-Israel’s board of directors.

“I feel proud to stand at the head of an organization that leads the way in everything it does, and is well known for its professionalism in the service of the elderly, low-income seniors and Holocaust survivors,” said Mandelbaum.