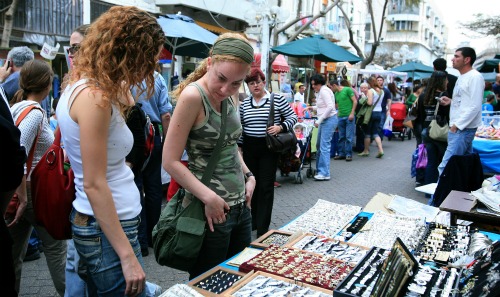 Photo by Moshe Shai/Flash90
A woman browses jewelry at a stall in Nahalat Binyamin.

If it’s any day except for Tuesday or Friday, the pedestrian street called Nahalat Binyamin in Tel Aviv is calm. Coffee drinkers sit at the many cafés, sipping their cappuccinos and gazing at the passersby, fabric stores and newly arrived boutiques that make up the street scene.

But on Tuesdays and Fridays, hundreds of people throng the three-street Nahalat Binyamin neighborhood, stopping to view, admire and purchase the works of the artists displaying their wares.

The Nahalat Binyamin Arts & Crafts Fair was an initiative of the city of Tel Aviv in 1987 and is now the country’s largest fair, with more than 200 artists selected by a public committee. For many, this two-day-a-week fair is their gallery, their one venue for exhibiting and selling their creations.

And the creations are varied — ceramic pots, jewelry, toys, figurines, blown glass, wearable art, recycled paper lampshades and much more. According to the fair guidelines, all creations must be handmade and sold in person by the artist at the fair.

It all happens here

Amnon Lipkin, whose old-fashioned wheeled cart holds his portable sewing machine as well as his cleverly sewn toys — such as a “camera case” bag or toaster with bread — likes that the fair offers a sometime storefront.

“Nahalat Binyamin is half a store for me, but not a whole store, which is what I had in mind,” Lipkin tells ISRAEL21c. “I have my studio where I sit and sew quietly, and Nahalat Binyamin is just a short walk away, making this my neighborhood for work and life. I like that it all happens right here.”

Artists receive actual addresses, corresponding with the street addresses where their stands are situated. It’s fitting, as the neighborhood has almost always been home to small shops and their owners. 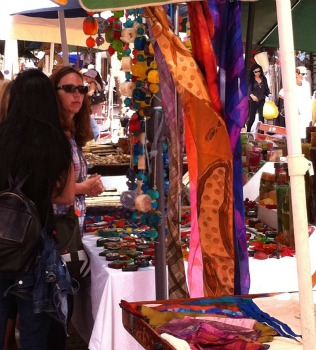 Wearable art at the street fair.

Named after the father of modern Zionism, Benjamin Ze’ev (Theodor) Herzl, Nahalat Binyamin (“the estate of Benjamin”) was the longest street in the city when it was first paved and became the main artery of one of Tel Aviv’s original neighborhoods of the same name. Its early 1900s founders were upper-class tradesmen and clerks, craftsmen, shopkeepers and booksellers. At first, the five-acre neighborhood was solely residential, but as Jews left Jaffa and migrated to the growing modern Israeli city, owners added stories to the houses with storefronts on the street level.

Later on, the street’s proximity to the Carmel food market, the major artery Allenby Street as well as Kerem HaTeimanim (Vineyard of the Yemenites), a poor neighborhood whose architecture resembled the Jewish ghettos of Yemen, made Nahalat Binyamin fully commercial, as well as a great eventual location for the fair.

Artists inspiring one another

Twice a week, the three-pronged street fair is bustling with stalls, artists and customers, as well as other pedestrians making their way to the many local fabric stores in what has become Tel Aviv’s garment district. The artists chat with one another or work on their pieces during down times. They sometimes bring their spouses or babies along.

“We’re like our own, small neighborhood,” says gourd artist Neomi Zelman of her fellow artists. “We treat each other very well, we inspire one another, we share techniques and materials. And the exposure to the great audience has been wonderful.”

She’s echoed by Michal Ben Yosef, a ceramicist who has been selling her salt-and-pepper shakers, trays, hamsas and pomegranates at the fair for more than15 years. “I love getting to talk to my customers, and hearing what they’re looking for,” she says. “Then I go back to my studio, brainstorm a little and come up with new designs. It’s always a fruitful two days.”

As Nahalat Binyamin has grown, young Israeli clothing and accessories designers have begun setting up their shops and studios near the textile stores that they frequent, and benefiting from the fair traffic two days a week.

Lydia Renert, a designer of industrial fabric handbags and accessories, opened her first store-cum-studio in Nahalat Binyamin in December of last year, sensing that foot traffic had changed in the neighborhood. 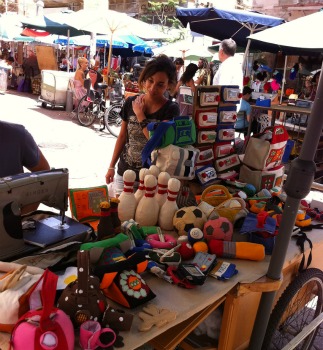 “Nahalat Binyamin is and always will be the Tel Aviv address when you are looking for 100% Israeli crafts,” says Renert. “But there’s an urban feeling here that calls for more conceptual design, in addition to the arts and crafts. That’s why opening a studio store offers all the options. The visitors are geared for a street fair experience, and when they walk around, they find my studio as well.”

Creativity, clearly, is never lacking in this neighborhood. When the fair closes down in the late afternoon, the street returns to normal and it’s easier to get a sense of the buildings’ Eclectic architectural style, so-called for the mix of the Arabesque, Turkish and British influences found in the early 1900s-era structures.

Nahalat Binyamin offers good history, fun shopping and easy access to other well-known Tel Aviv stops, from the next-door Carmel food and vegetable market, into Kerem HaTeimanim with its grilled meat restaurants and from there to Neve Tzedek, the city’s first Jewish neighborhood outside of Jaffa.