Hebrew University Prof. Sydney Engelberg was caught off guard by the social media buzz he unintentionally created after a photo of him holding a student’s baby while lecturing hit the Internet. 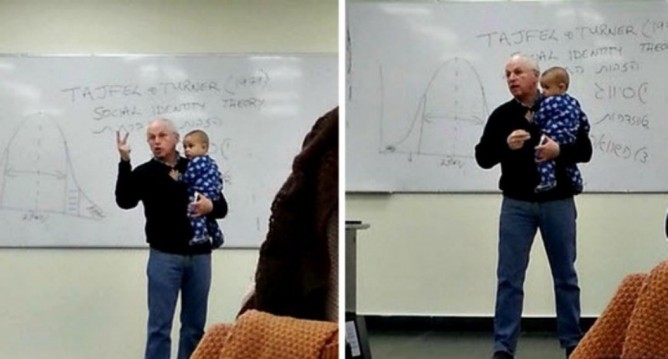 Hebrew University Prof. Syndney Engelberg with the baby that’s made him famous.

Now, the 67-year-old social psychologist is being called “Professor of the Year,” “Most Valuable Professor” and a whole range of other superlatives.

Fishbaine posted the photo of her father in action on her Facebook page. It has since racked up more than 48,300 likes on her page alone.

“Israel is a very familial society, and it is not at all strange for young mothers to bring children to classes.”

The original photo seems to have been posted by a student on Imgur with the caption stating that the mother got up to leave the classroom when her baby started crying during the lecture on organizational management. Engelberg told her to stay while he took the boy in blue footie pajamas. That post has topped one million views.

“This is a professor who truly cares about the education of his students. Seriously,” wrote a commenter on Imgur.

“This is awesome. Way to go professor,” another wrote.

The Jerusalem father of four and grandfather of five has seen his star rise across the world.

“He’s gotten love letters,” the professor’s wife, Fredi Siskind Engelberg, told Yahoo Parenting, noting that he’s been getting nonstop calls from radio and TV stations. “He’s pretty blasé about it, and we just find it all very funny. I think it must have happened on a no-news day.”

Engelberg, who has been teaching for 45 years, has always encouraged his students to bring their babies to class and allows nursing mothers to breastfeed in the classroom.

“The reason is that education for me is not simply conveying content, but teaching values,” he told Yahoo Parenting. “How better than by role modeling?”

And he’s not the only educator to allow babies in the classroom. On its Facebook page, the Israeli Student Union is calling the social media buzz following Engelberg “the sweetest trend” and posted photos of other lecturers cooing and burping their students’ babies during class.

“I’m part of a great phenomenon … Dr. Orit Gilor taking my daughter to ‘burp her’ after I just finished breastfeeding. Photographed two years ago,” writes Hadass Arussi about her Beit Berl College lecturer on the Student Union Facebook feed.

“Israel is a very familial society, and it is not at all strange for young mothers to bring children to classes. Babies are often brought to weddings or formal occasions, and during school holidays it is not uncommon to see children running through the halls of office buildings or university departments,” Jonathan Kaplan, vice provost of the Rothberg International School at the Hebrew University of Jerusalem, told Yahoo Parenting.

In fact, at some universities in Israel you can even buy baby clothes on campus.