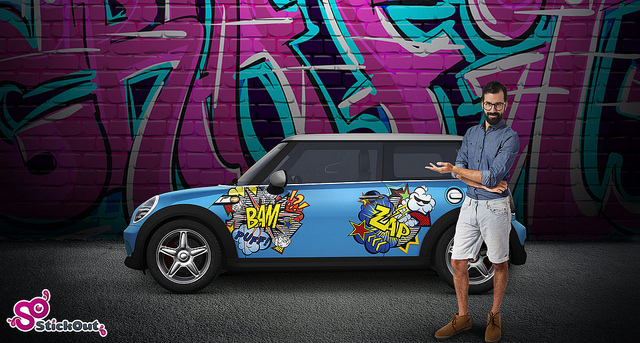 The day of customizing your car by yourself has arrived. No more begging MTV for a spot on its popular Pimp My Ride show; say goodbye to expensive custom car shops and car painters. Two new Israeli companies are offering instant do-it-yourself automobile personalization options that will have you driving the coolest car in your neighborhood in a matter of minutes – and without breaking the bank.

StickOut and Carta2 launched crowdfunding campaigns at almost the same time for similar products that will dress up your car in a custom-made skin.

StickOut was started in 2013 by Gera (Gerardo) Waisbaum, a veteran entrepreneur and technology professional. He tells ISRAEL21c the inspiration came to him while he was stuck in traffic.

“That day I had bought a designer skin for my iPhone and I thought this skin is a way to explain myself,” Waisbaum, the former cofounder of a daily deals website sold in 2010. “I was in a really big traffic jam, and I looked at all the cars around me and it was clear that they all look the same. People customize their phones, their laptops and their clothes. So, I thought, why not cars?”

The decals are cut for the specific vehicle model.

Carta2 (pronounced “car-tattoo”) is a youthful brother-sister operation that launched in mid-2014.

“It was important to give it a young vibe,” says co-CEO Mosh Lebovich, 25, a car enthusiast who worked with his sister Noa, 22, as an event organizer before launching Carta2. “You give the car something like a tattoo, even though these stickers are not permanent. We’re hoping this will change the way people see their cars.”

He points out that people invest a lot of money in how they look. “We don’t see any reason why this wouldn’t translate to their cars as well. Cars are the most expensive items people own. You care about them; why wouldn’t you give them something personalized?”

Indeed, consumers seem to be looking to personalize everything from phones to laptops, dinnerware to clothing to jewelry, according to the Trend Hunter website. Israeli entrepreneur Moran Nir brought the world FunkKit to jazz up sneakers and now it seems Israelis are going to dress up the cars of the world.

Customers log into the StickOut Style Lab website and choose their car model, pick an artwork and preview how it will look. The easy-to-use platform took the company a year and a half to perfect, says Yair Ida, co-founder and VP marketing.

Car decals are already available, of course, but they’re generic.

“You can order stickers off eBay or AliExpress but you have to cut them yourself,” says Ida. “Also, every car is different and has different curves. You don’t know how it will look. We cut our stickers to fit your car exactly.”

Carta2 plans to build a similar site with a 3D interface to show users how the adhesive decals will look on their cars, and to share their choices with their friends and get feedback before making a purchase. The crowdfunding campaign has already passed its $60,000 goal and Lebovich says the site will launch soon.

StickOut’s Ida says the preview mode can help get people beyond apps that let you dress up virtual items just for fun.

“People want to customize their cars but it’s expensive and they don’t know what material to use or how to do it,” says Ida, the former head of business development for Auto Group, Israel’s largest automotive media firm. “StickOut’s Style Lab is not an app to play with; it actually makes it easier for customers to see what they’re going to get and how it will look on their cars.”

The StickOut decals are made of patented 3M material – the same vinyl used by professional car-wrap companies — for easy application and removal. Ida says StickOut’s pre-cut stickers can be used even on leased cars because they don’t leave a mark on the car.

The car-customization business in America is worth some $33 billion, according to an AACB report released in February 2015.

Both StickOut and Carta2 work with communities of independent artists from around the globe to provide the sticker art.

“Our vision is to have a crowdsourced community — the artists promoting themselves and spreading applied art to everywhere, including cars,” says Ida. “We really believe in the art.”

The decals are printed on 3M vinyl.

“We want to add color to the streets, put art on wheels,” say the Lebovich siblings.

They envision people using the stickers for events as well.

“If you have a special occasion like a wedding or Mother’s Day, you can send your idea to one of the artists in our community and they can make a temporary sticker for your car. It doesn’t have to be complicated; it’s easy and you can do it yourself,” says Lebovich.

StickOut’s decals are already available through its website. The Kickstarter campaign seeks to raise exposure and $20,000 to expand to the small business community looking to brand just a few cars, and also let users upload designs or logos for printing.

Ida says the campaign has even ignited interest from big car brands.

“We talk about StickOut as a solution to B2C [business-to-consumer] but the B2B [business-to-business] market is also huge. This is an add-on and there’s a demand in the market,” he says.

If StickOut and Carta2 set into motion this new car skin personalization trend, boring traffic jams could soon be a thing of the past.