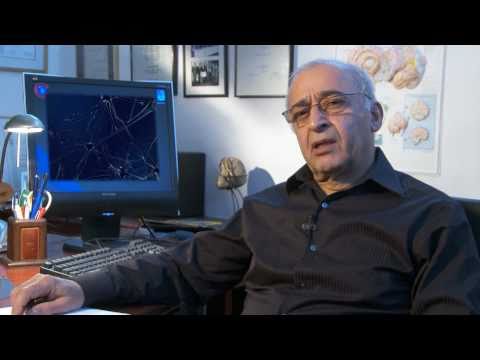 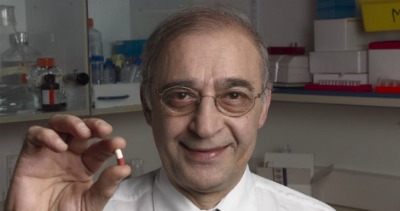 Prof. Moussa Youdim holding a capsule of Azilect, the first drug to slow the progression of Parkinson’s disease.

Haifa wasn’t such a hip place when a promising young researcher from Oxford arrived at the Israeli port city in 1977. His task was to establish the pharmacology department at the Technion Institute of Technology’s fledgling medical school.

“The medical school was only three years old, and it was like a desert here,” recalls Prof. Emeritus Moussa Youdim, now director of the Technion-based Eve Topf and US National Parkinson Foundation Centers of Excellence for Neurodegenerative Diseases Research.

“There was not even a decent restaurant. I had to put an incredible amount of effort into setting up the department, recruiting people and purchasing equipment as well as teaching and continuing my research.”

Realizing that he could excel at science or language, but not both, he soon gave up trying to learn Hebrew. This single-minded dedication paid off as Youdim became the driving force behind breakthrough drugs to slow the progression of Parkinson’s and Alzheimer’s diseases. He’s won nearly 50 awards and prizes, most recently sharing a $1 million EMET Prize for Art, Science and Culture for his work in neuroscience.

Spurning offers in the United States and elsewhere, the Teheran native remains in Haifa today, still researching neurodegenerative disease remedies as he turns 72.

“After the first two years, I figured I put in so much effort I might as well stay,” he tells ISRAEL21c.

And despite his lack of Hebrew fluency, he has educated (in English) a cadre of Israeli researchers and biomedical entrepreneurs.

Honored by the Shah

Youdim left Iran at 12 to attend a British boarding school, and was last in Teheran in 1978 to receive a royal medal from the Shah for his advances in understanding Parkinson’s disease and migraine headaches. Just four years later, the Shah – and Youdim’s parents – fled the country.

However, he remembers the Teheran of his youth as “wonderful,” with devout Muslim neighbors who looked after the Jewish Youdim children when their parents were away. “We also encountered people who called us ‘dirty Jews’ on our way to and from school, but only rarely,” he admits.

In 1956, his father became incapacitated by chronic depression and came to England for electroshock treatments because no drug was yet available to treat this disease.

So when young Moussa went off to college at McGill University in Montreal three years later, the new field of neurochemistry caught his imagination and never let go. He earned three degrees from McGill in biochemistry by 1966 and then went for further studies and teaching positions at London University, Cambridge University, College de France and Oxford University.

It took 20 years until Azilect, the Parkinson’s drug he innovated with Technion colleague Prof. John Finberg, was commercialized by Israel’s Teva Pharmaceuticals. It’s now used by patients in 56 countries.

Youdim explains that the lengthy process could have been halved if not for Teva’s initial reticence, but he never abandoned hope. “It was a dream, and if you have a dream you don’t give it up,” he explains.

Getting treatments to patients

Mostly retired from teaching, Youdim is developing next-generation drugs that not only slow the progression of neurodegenerative diseases but repair and protect the affected nerve cells. In January, Avraham Pharmaceuticals reported that clinical trial results for Ladostigil, an anti-Alzheimer’s and anti-Parkinson’s medication Youdim helped develop, are significantly positive, and the trials will continue another six months. Additional drug candidates are being nurtured as well.

“My real goal is to get these into the clinic,” says Youdim. “This is the most important work I have ever done.”

He is involved in a host of collaborative projects through Varinel, a US-registered emerging pharmaceuticals company of which he is the scientific founder. These include developing a cardio-protective drug; researching treatments for amyotrophic lateral sclerosis (ALS) and Huntington disease; and investigating the antibacterial properties of his Parkinson’s drug.

Youdim and his second wife, Fruma, travel frequently for business and pleasure. He recently toured the Far East, where he has served as a visiting professor at universities in Hong Kong, Seoul Qingdao, Janin and Shanghai, among other places. And in January he flew to Germany to negotiate bringing an anti-Parkinson’s drug invented there to be further developed in Israel.

He enjoys taking in opera and fine cuisine an hour’s drive away in Tel Aviv, and owns seven cameras. “I photograph anything interesting,” he says, from architecture to faces.

Youdim has three children from his first marriage: Son Shai manages a Suzuki dealership in Haifa, son Tal is in his third year of mechanical engineering studies at the Technion, and daughter Avigail is completing her training in jewelry making at Shenkar College of Engineering and Design.

UNCOVER ISRAEL - Get the ISRAEL21c
Weekly Edition free by email
Sign Up Now!
Bring Israel's story to life.
Millions of people around the world rely on us to gain a deeper understanding of Israel. We are the trusted source for original content you won't find anywhere else.
You can make a difference. Donate today to support journalism that brings Israel’s story alive.
SUPPORT ISRAEL21c
Read more on:   People, Health