Israeli researcher Avi Domb’s kit, sent aboard the space station Atlantis, shows how a polymer can cut into bacteria and neutralize it. 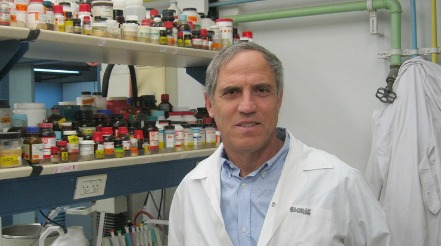 Avi Domb in his lab at the Hebrew University.

Astronauts in space stations, like people on Planet Earth, produce waste. But what to do with it is a problem. Space sewage can’t exactly be flung out the window, and with water supplies very limited, recycling is a must. So the US National Aeronautics and Space Administration (NASA) and other space agencies are always looking for new ways to decontaminate water for safe reuse.

This is one reason why Israeli researcher Prof. Avi Domb from the Hebrew University of Jerusalem was invited to have his water research project tested aboard NASA’s Atlantis mission in the summer of 2011. Domb has a solution for the tricky task of neutralizing bacteria.

When NASA called at the last minute inviting him to put his experiment on board, Domb had about three stressful days to put it together: “It was so surprising and the time frame was so short. We got the call and within three days we had to have the experiment done. It was a kit.”

The project that went to space was a new nanotechnology-based polymer – a kind of plastic impregnated with minuscule ammonium-based molecular groups. On contact with bacteria, these polymers cut into the bacteria’s cell walls like a sword and spread the ammonium across the surface, making a hole. The organelles, essentially the organs of the bacteria, spill out and the bacteria are no longer a threat.

You cannot feel the small “swords” with your finger, but it is possible to see them with the help of a microscope, says Domb, whose main line of research is developing carriers for delivering targeted therapies to wipe out tumors and other pathogens in specific regions of the body.

On a mission to make clean drinking water

In his work with water, he is looking into a couple of other channels to remove toxins and chemicals including arsenic and heavy metals.

The kit requisitioned by NASA is being developed with the Israeli company Strauss Water, a subsidiary of the Strauss Group, Israel’s second-largest food and beverage company. Together, Domb and Strauss are researching novel filters as well as materials that can remove toxins from water. 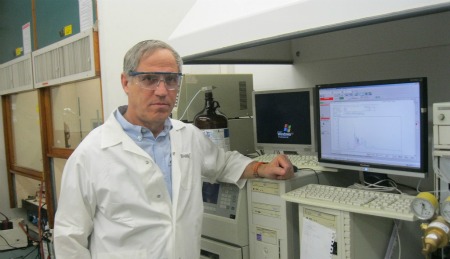 “It was initiated by Strauss Watera company that Strauss started a few years ago by acquiring a small company I was involved in called Aquasound,” says Domb. “When Strauss bought it, it was called H2Q, and after acquiring Tami 4 [an Israeli home water filter company] it became Strauss Water. That was about two years ago, and now this experiment falls under the umbrella of Strauss Water with the intention of developing a more effective filter for consumer-based water filters,” he explains.

This wasn’t Domb’s first invitation to outer space. Another one of his experiments was aboard the ill-fated Space Shuttle Columbia that crashed upon re-entering earth in 2003, killing all astronauts on board. Israeli astronaut Ilan Ramon, a payload specialist who was aboard the mission, had been briefed as to how the experiment should be carried out.

“The experiment was to find out how engineered cells from earth are acting in space with a specific gravity. It didn’t come back. My partner Dan Gazit from the [Hebrew University] Dentistry School was Ramon’s dentist and worked with him on it one day to familiarize Ramon with the experiment. It was a very touching day,” recalls Domb.

When he sent this new experiment into space, he had to make the kit simple and safe — simple so that astronauts could carry it out with ease, and safe so that it wouldn’t contaminate the environs. Domb prepared two plastic tubes, one made from a plastic with the special anti-microbial polymer, the other without. Both contained the same amount of water and bacteria.

When the experiment returned to Earth it was clear that it worked — the tube with the nanotechnology polymer had succeeded in killing the bacteria inside it. Just how the space environment influenced the activity of the mechanism, and the DNA of the bacteria, is what Domb’s looking into now.

The material has many self-sterilizing applications for hospitals, industry and just about anywhere bacteria are a threat.