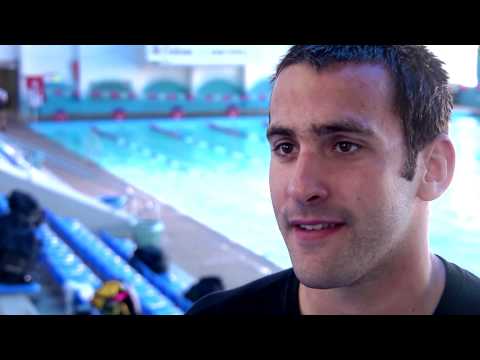 Swimmer Jonathan Koplev was really excited to take part in the upcoming Olympic Games. He radiated with anticipation when talking about the opportunity to represent Israel on the world stage.

So, when headlines broke early this afternoon that Koplev had just undergone emergency surgery, it was with regret that we updated our Olympics news coverage section with such a disappointment.

The 20-year-old Haifa native had just been crowned European Champion in the 50-meter backstroke and was hoping to carry the momentum into London.

As part of our Olympics coverage, ISRAEL21c profiled 13 of the 38 athletes in short video clips. Koplev was one of our first profiles.

We caught up with him at a swim practice at Wingate Institute – Israel’s National Center for Physical Education and Sport in late June. We watched him and his fellow senior swimmers crisscross the pool over and over again. It was cheerful to see the athletes flash smiles almost every time they finished a set of laps.

When Koplev finally got out of the pool, we asked him to stick around for a bit and assist with our video series. Whereas some of the other athletes excused themselves, Koplev happily helped out. He was charming and in high spirits.

“Representing my country is a dream come true,” he told ISRAEL21c, meaning every word. “I’m just so proud to wear the national shirt.”

And the Israel Olympic Committee was proud for Koplev to wear blue-and-white. He was being touted as one of the Israeli Olympians set to break into the top rankings.

At last week’s Israel National Swimming Championships, however, Koplev pulled out of his race due to stomach pain. Last night he was rushed to hospital. By this morning he was already recovering from an appendectomy.

Though optimistic from his hospital bed that he may still join the Israeli delegation as they head out to the Olympic Games on Thursday, hospital officials were more realistic that Koplev’s run for gold would have to wait until Rio de Janeiro.

The average recovery time from appendectomy is six weeks. The Olympics are in 12 days.

“It will take him a few days to recuperate, we don’t want to say anything that will tempt fate,” Noam Zvi, president of the Israel Swimming Association, told Ynet. “Sometimes athletes recover miraculously, and we hope this will be the situation for Jonathan Koplev as well.”

UNCOVER ISRAEL - Get the ISRAEL21c
Weekly Edition free by email
Sign Up Now!
Bring Israel's story to life.
Millions of people around the world rely on us to gain a deeper understanding of Israel. We are the trusted source for original content you won't find anywhere else.
You can make a difference. Donate today to support journalism that brings Israel’s story alive.
SUPPORT ISRAEL21c
Read more on:   Blog, Profiles, european champion, israeli swimmer, jonathan koplev, Israeliness, Entertainment, OIympics