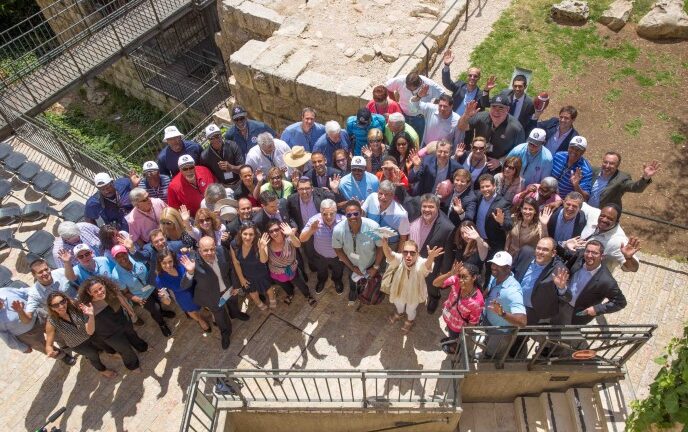 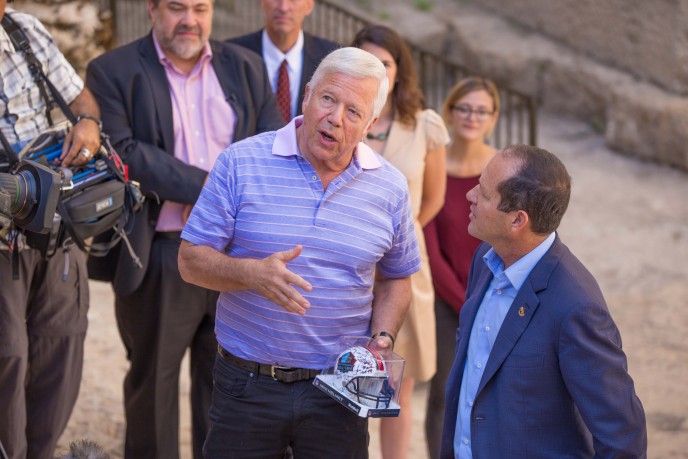 Owner of the reigning Super Bowl champion New England Patriots, along with 19 NFL Hall of Famers, is in Israel for a special tour of the country’s tech scene, landmarks and local football action.

The goodwill week-long trip to Israel, called, “Touchdown in Israel: Mission of Excellence,” was organized by Patriots Chairman and CEO Robert Kraft, in coordination with Israel’s Ambassador to the United States, Ron Dermer.

“I don’t think there’s a better place that you can bring people no matter what their faith might be. They come here and their lives are changed,” Kraft said.

The gridiron greats got an up-close look at 10 Israeli startups at a technology expo in Jerusalem’s Old City.

“Jerusalem was recently voted by Time Magazine as one of the world’s five emerging tech hubs and that can truly be seen today,” said Jerusalem Mayor Nir Barkat. “I think it’s a combination of really understanding our past and the beauty and the power of Jerusalem and its history. I believe in a very strong connection between our past and our future. More and more high tech entrepreneurs see their future here.”

The NFL legends saw a demo of ReWalk, a wearable exoskeleton that allows individuals with spinal cord injuries to walk again. They also got an introduction to Elminda, the world’s first FDA-approved neural functional assessment tool to visualize serious brain trauma and illness.

“Elminda is a perfect example of the kind of breakthrough technology coming out of Israel which is close to the hearts of these football greats. It offers a potentially huge breakthrough for mitigating sports injuries, detecting sports based concussions, advancing brain research and changing the lives of the two billion people worldwide living with brain disorders,” said OurCrowd CEO Jon Medved. 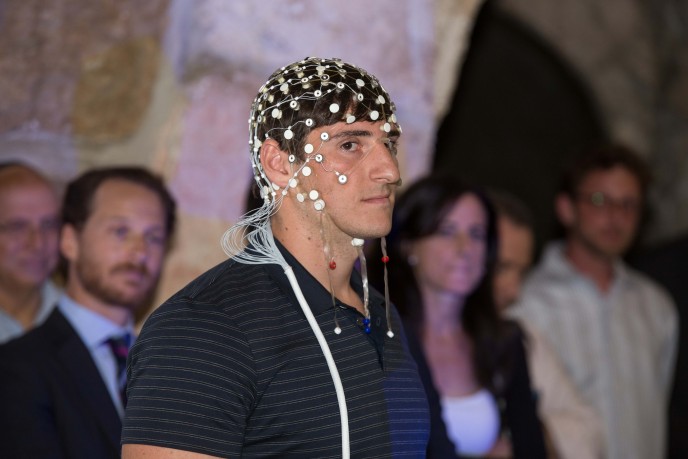 ‘Elminda is a perfect example of the kind of breakthrough technology coming out of Israel which is close to the hearts of these football greats’ — OurCrowd CEO Jon Medved. (Photo by Herschel Gutman)

Other companies on display included OrCam, an intuitive portable device with a smart camera designed to assist the visually impaired; Glide, the world’s first and only messaging application with streaming video technology; Inpris, technology that recognizes the individual movements of each fingertip anywhere on a touch-screen; MUV Interactive, a state-of-the-art solution for interacting with multiple screens and media sources through touch, remote and voice interaction; BriefCam, the video analysis software keeping city streets safe; Consumer Physics, makers of SCiO, an advanced optical spectrometer that allows users to identify the chemical makeup of anything around them; Cimagine, the most visually advanced and user-friendly way for consumers to envision and interact with physical products in virtual reality and Highcon, which manufactures the Euclid, a machine that automates packaging production by bringing it into the digital age. 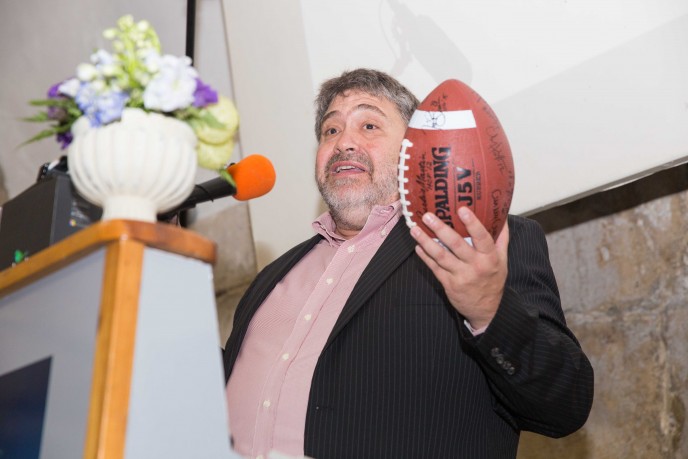 “I think the exoskeleton’s ability to help a paraplegic walk is such an emotional thing to see,” said NFL Hall of Famer David Baker. “[We were interested in] every one of these companies, from helping the consumers to helping blind people read, to helping process information better. For a lot of our players, [we appreciated] the ability to understand what’s happening in the brain with a concussion. It was all fantastic.”

“It’s been very, very great and exceeded my expectations to a great extent,” said NFL Hall of Famer, Curly Culp. “I’m just so glad to be here and learn about the history of Israel and how things are moving forward. I think the hospitality, the people, the history of this place, the holiness of this place you know it’s a very spiritual and educational experience for me.”

“I’ve been baptized previously, but the honor of being baptized in the same place that Jesus was baptized was something I could not pass up and something I’ll never forget in my life,” Curtis Martin told ESPN. “This whole trip to Israel has been one of the best experiences in my life.” 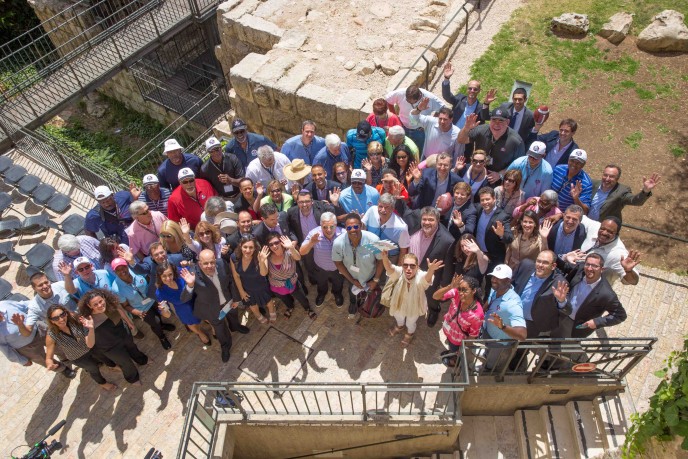