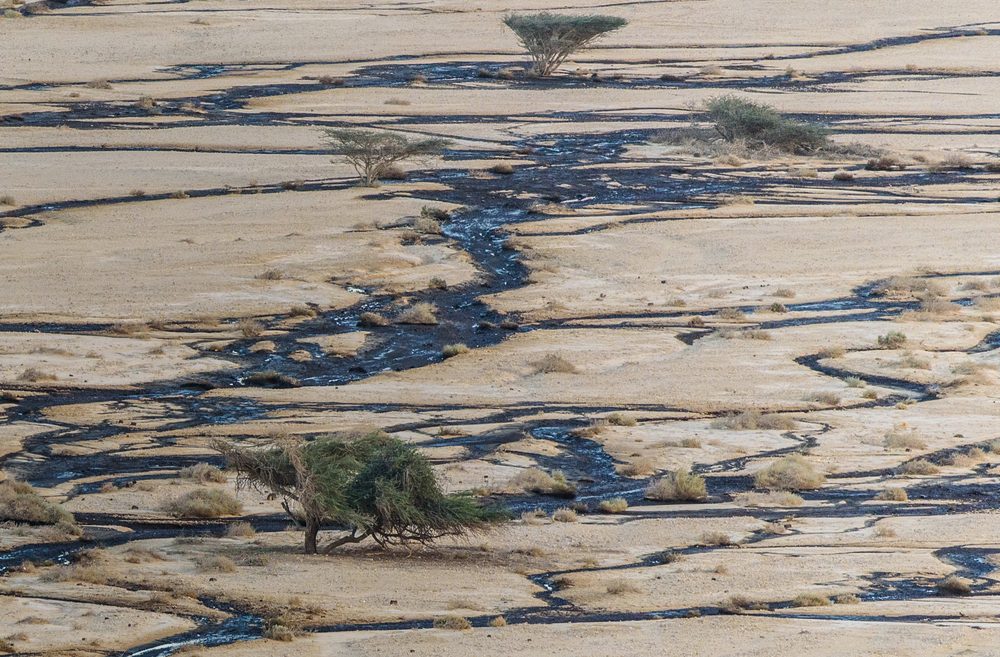 The oil spill that occurred during the early morning hours of December 4, 2014, at the Evrona Nature Reserve in the Arava Valley in southern Israel is considered one of the most notorious environmental disasters in Israel’s recent history.

That night, 5,000 cubic meters of crude oil leaked from a ruptured section of the Eilat-Ashkelon oil pipeline. Vast quantities of oil flowed through the streambeds into the reserve, causing severe damage to flora and fauna.

“Oil is one of the most common pollutants in the world,” says Ran Pelta, a doctoral student in Prof. Eyal Ben-Dor’s Remote Sensing Labat the Porter School of Environmental and Earth Sciences at Tel Aviv University.

“As a result of human activity, oil pollution can be found in almost any ecosystem, onshore or offshore. Studies have shown that oil impairs enzymatic activity of the ground, restricts soil porosity, and impedes water and air passage through the soil. People who live near refineries or those who have worked in oil pollution clean-ups have had a variety of health problems, from skin irritations to liver and kidney damage,” he adds.

Over the years, numerous methods were researched and developed to tackle the damage caused by oil leaks. Most of the proposed solutions were of a chemical nature, which are expensive, ineffective, and harmful to the environment. 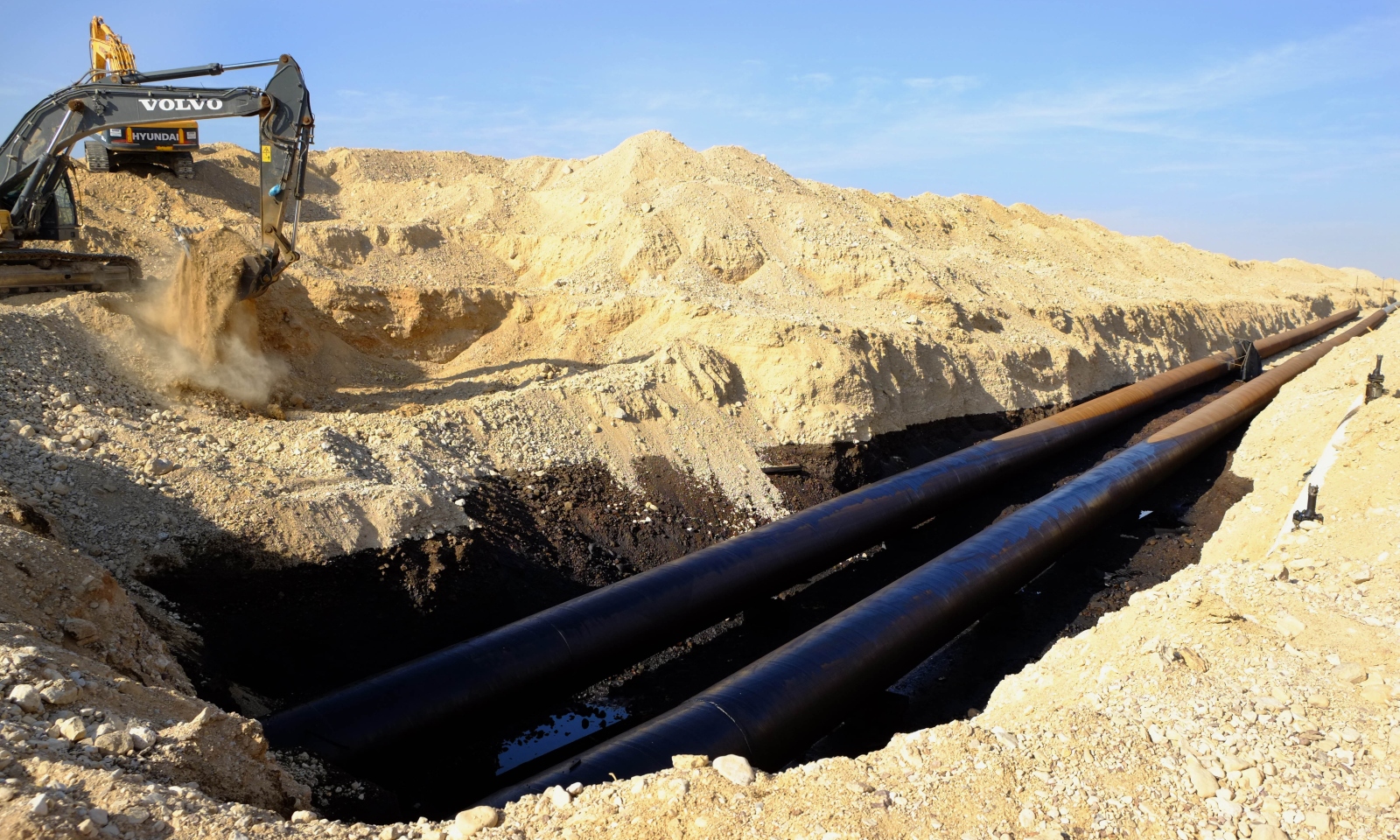 Bulldozers working in the area of an oil leak caused by a crack in the Eilat-Ashkelon pipeline in December 2014. Photo by Chen Leopold/FLASH90

Some studies suggested treating the contaminated soil with bacteria that can biodegrade the oil without the use of chemicals.

Although using bacteria is cheaper and more efficient in cleaning up oil contamination, the main difficulty is detecting the exact location of the pollution. In the Evrona Nature Reserve, significant efforts were made to sample various areas to identify sites with the highest oil concentrations. This was a slow and tedious process.

“The algorithm developed in our lab can use 288 different colors”

Both studies feature methods that would use remote sensing to find contaminated areas. Remote sensing is the process of obtaining information about an object without making any physical contact.

“This technology has been around for decades, but only in recent years has there been significant progress in technology, and availability. Google, for instance, has built a tool geared towards downloading, processing, and analyzing satellite imagery,” explains Pelta.

Acquiring information about the Earth’s surface through remote sensing is made possible by the reflectivity of physical matter. For example, solar radiation hits different objects, such as vegetation, water, and soil. Some of this solar radiation is reflected by the object and can be absorbed into a remote sensor. Components within the sensor split the reflected radiation into specific wavelengths.

Each object has a spectrum that represents its wavelength and its frequency – a kind of fingerprint that allows the sensor not only to distinguish between soil or vegetation but also to determine the type of soil and vegetation in question, without even having to see the object.

“The cameras on our cell phones work in a similar manner,” explains Prof. Shai Kendler, a researcher at the Israel Institute of Biological Research and guest professor at the Technion.

“Every photo on our phones contains many pixels, each of which has a reflectance spectrum. The phone has three colors –red, blue and green –all of which are on the visible spectrum and can be detected by the human eye,” he adds.

The sensor in question, which is not yet available for commercial use, encompasses a much wider spectrum, enabling the detection of wavelengths that are not visible to the human eye, and uses different algorithms to decode the information that the sensor receives.

By testing various material samples at Kendler’s laboratory, scientists were able to develop an algorithm capable of quickly identifying the type of pollutant according to its reflectance spectrum, which can subsequently be mapped to show the impacted area.

“The algorithm developed in our lab can use 288 different colors, unlike the three that exist on phone cameras. When there are so many shades, it is easier to identify exactly the type of pollutant you’re dealing with and separate it from the soil,” says Kendler.

“Rocks and soil, for example, are objects which have a color that is strong and distinct,” Kendler explains. “In contrast, pollutants are often shown as thin and permeable layers. Therefore, part of the reflected spectrum is that of the underlying soil, which makes it hard to separate the pollutant from the soil, let alone mapping the contaminated area.”

The new algorithm can detect and specify the chemical properties of a color automatically and without prior knowledge. It can also tell whether a pollutant exists within each pixel.

The algorithm has other potential applications. One study in Kendler’s lab, for example, demonstrates the algorithm’s ability to identify anthrax inside paper envelopes.

Pelta elaborates on the capabilities of the new algorithm in comparison to past technologies.

“In an aerial photograph of the Evrona Nature Reserve, for example, we were not able to detect the oil spill, despite the high-quality sensor we used and although we obviously knew the oil was there. The main reason for this is that the footage was taken about two and a half years after the disaster, in an area with challenging terrain, as opposed to laboratory measurements under optimal conditions,” explains Pelta.

Because the oil was exposed to the surface for a period of time, it was difficult to detect its spectral fingerprint through the sensor.

Kendler and Pelta emphasize that what makes their findings unique and important is the efficiency and applicability of the new remote sensing methods.

“At the time when the technology was first invented, it was relevant to large institutions that were able to invest huge sums of money in order to find pollutants,” Pelta says.

In NASA, for example, remote sensing and reflectivity spectra are used for mapping rocks on other planets. Part of the scientists’ achievement is that the system requirements are relatively low, and so less professional bodies can use the algorithm.

In the future, the scientists hopeto develop a sensor, based on the new algorithm, that can be attached to dronesor even satellites, thus enabling the mapping of various pollutants efficiently and on a much wider scale.

Indeed, the easiest way to reduce oil spills and other pollutions is to prevent them from happening in the first place through taking appropriate safety measures, monitoring, and enforcing environmental regulations.

But in the event of a disaster, new technologies will allow for significantly better data-collection methods in soil sampling. As these technologies continue to evolve, mapping will become more widely available to government agencies and environmental organizations, which will also boost the efforts of protecting nature against the dangers of future oil spills.

UNCOVER ISRAEL - Get the ISRAEL21c
Weekly Edition free by email
Sign Up Now!
Bring Israel's story to life.
Millions of people around the world rely on us to gain a deeper understanding of Israel. We are the trusted source for original content you won't find anywhere else.
You can make a difference. Donate today to support journalism that brings Israel’s story alive.
SUPPORT ISRAEL21c
Read more on:   Environment, Oil Spills