Why did 1,200 tons of sticky tar begin washing up on Israel’s Mediterranean beaches on the stormy day of February 17? The answer is not yet clear.

Experts say that no matter what caused Israel’s worst environmental disaster, it should have been contained as much as possible before contaminating 160 kilometers (nearly 100 miles) of Israel’s 190-kilometer seashore. They agree that Israel must formulate better ways of preventing, detecting and clearing oil spills.

But amidst the criticism runs a strong thread of admiration for Israeli citizens. 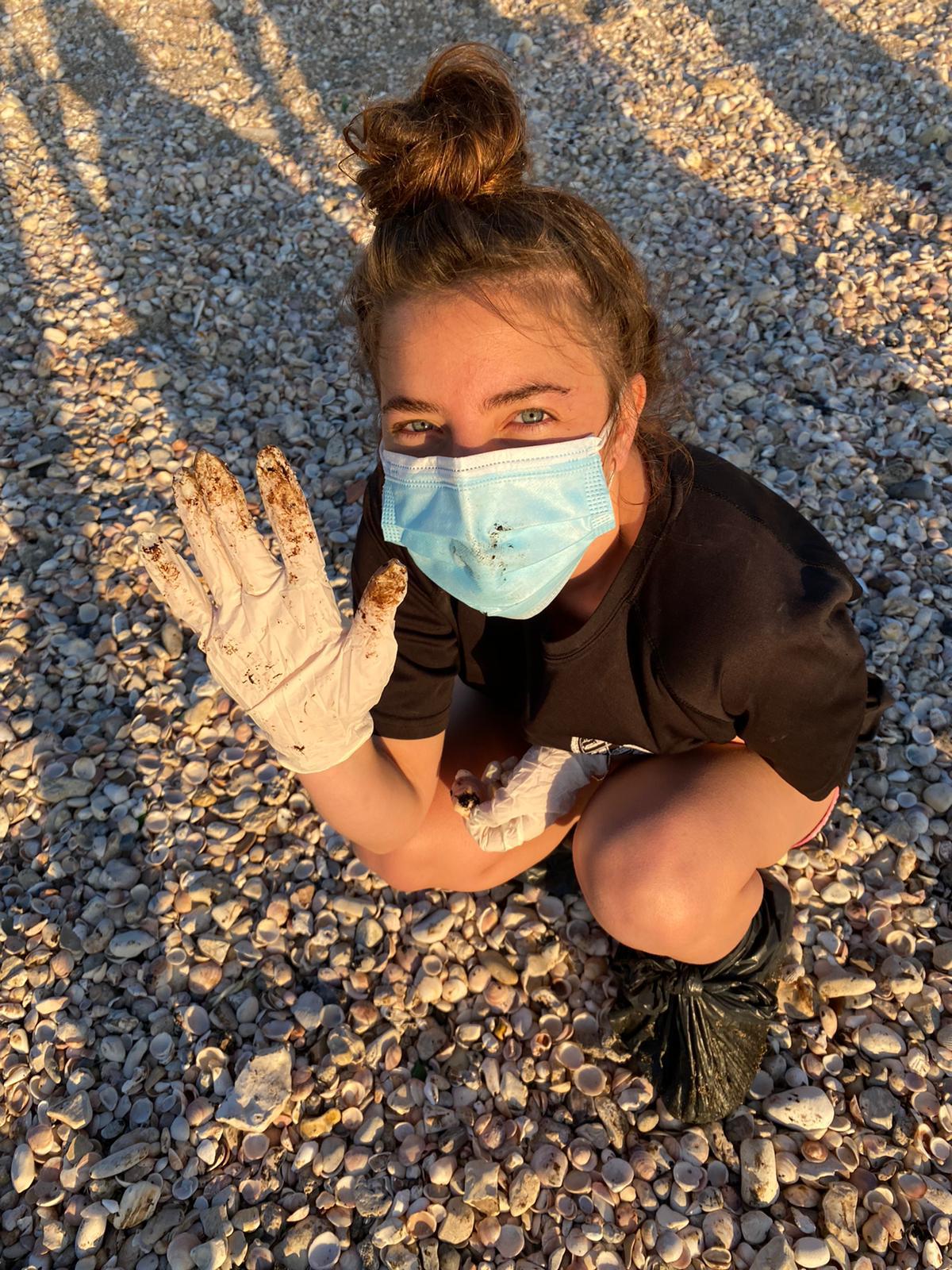 One of about 30 students from the Hanaton pre-military preparatory school in the Jezreel Valley who cleaned tar from Shikmona beach in Haifa. Photo courtesy of Hanaton

People from environmental groups, corporations and youth movements rushed to join soldiers and a government-funded corps of formerly unemployed Israelis in removing tar and rescuing injured wildlife on beaches from Rosh Hanikra to Ashkelon.

“The volunteerism in Israel has been amazing. Over 11,000 people came within a week,” says Maya Jacobs, CEO of Zalul, an environmental organization devoted to protecting Israel’s seas and streams.

Iris Hann, CEO of the Society for the Protection of Nature in Israel (SPNI), echoed that sentiment.

“Seeing the thousands of volunteers was so amazing. I was at the Kiryat Yam beach on Saturday and at Achziv on Monday, and it was so heartwarming to see people coming with gloves and nylon bags to gather tar from the sand. It gave me so much hope because even if the government doesn’t do enough, the public is very committed.” Yorai Lahav Hertzanu, the youngest member of the Knesset, spent the last two weekends cleaning tar from Shavei Zion beach near Nahariya and Apollonia Beach near Herzliya, along with other volunteers organized by the Yesh Atid political party.

“We got gloves and masks and put piles of tar into nylon bags, and tractors took them away,” Hertzanu tells ISRAEL21c, adding that the government needs better environmental policies to avert future disasters.

“I cannot describe the amounts of tar,” he says. “I saw two sea turtles covered in tar and we gave them to someone from INPA [the Israel Nature and Parks Authority].”

Chemical Sciences Prof. Mindy Levine of Ariel University says she applauds the grassroots mobilization but is concerned for volunteers’ exposure to the toxic black tar. 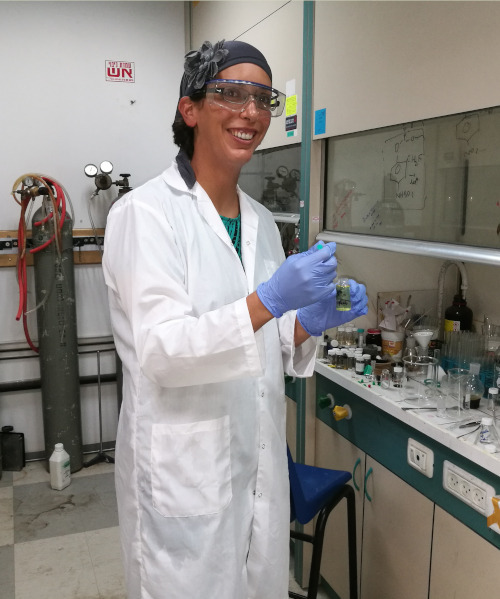 “It releases small molecules of toxins in the air every minute and they’re breathing that in — less so with masks but still a fair amount,” says Levine, who was part of the Gulf of Mexico Research Alliance that studied the 2010 Deepwater Horizon oil spill.

“Within a few weeks, most of the tar will be physically removed or degraded by the atmosphere or sunk deep into the sand where we won’t see it anymore,” she tells ISRAEL21c.

“But when the visible cleanup efforts are done, tar sunk into the soil will keep slowly releasing toxins. So people will need to be careful for a long time about going to the beach,” she warns.

“The bottom line is to use common sense. If you can smell the tar, you’re still breathing it in.”

For now, volunteers are needed because local authorities bear responsibility for environmental cleanups on their shores. They depend on nonprofit organizations (NGOs) and INPA to help them.

The EcoOcean NGO led the logistic feat of handing the 11,000 volunteers mentioned above and provided 250 trained volunteers to 22 coastal municipalities. EcoOcean is working with each one to coordinate volunteer training and deployment, EcoOcean Director Arik Rosenblum tells ISRAEL21c.

“All the NGOs are helping and sending people. We’re leading this effort with the cooperation and approval of the Ministry of Environmental Protection,” says Rosenblum.

He explains that the ministry is “fighting with one hand tied behind its back because it does not have the funding, staffing or authority to fully take control of this tier 2B national oil spill crisis, one level below the Gulf of Mexico spill.” Levine applauds Israel’s decision not to use chemical dispersants, which were used in the Gulf of Mexico disaster before it was known how harmful they’d be.

“The best answer to the problem is not to do anything chemically,” she says.

“There are cool bacteria whose job is to eat oil. They get recruited by the ecosystem and they work pretty quickly in a way that does not disturb the ecosystem.”

Levine and other experts say Israel also could have mitigated the disaster by skimming as much oil as possible from the water before it reached the shore in the form of sticky tar.

She shows children in her science camps how to do this on a small scale.

“I give them a cotton ball that they put in a nylon stocking and that’s shockingly good at absorbing oil from water. You can do this on a larger scale using skimmers or booms.”

EcoOcean has made its research vessel available to the Ministry of Environmental Protection to scan the coast with a special sensor to identify oil still in the water.

Rosenblum, however, says the success rate of capturing oil at sea is only 10 to 15 percent. Had there not been a storm on February 17, he adds, the best tactic may have been to direct the spill to sandy beaches so that the tar wouldn’t have hit rocky terrain and other hard-to-clean areas.

Mobilizing for the future

Ben-Gurion University (BGU) of the Negev has launched an initiative aimed at accelerating research to better handle oil spills. Prof. Raz Jelinek, a chemist and VP of R&D at Ben-Gurion University of the Negev. Photo by Dani Machlis/BGU

“We wanted to develop a very quick program of financial support for university researchers who can offer solutions for this disaster,” Jelinek tells ISRAEL21c.

The focus is on technologies for fast uptake of tar from water and beach, monitoring systems for offshore natural-gas wells, and early-warning systems for future oil spills.

“The key is fast action and there are a lot of capabilities at BGU that can be exploited for addressing this disaster. We may be able to match individual researchers with similar methodologies so the whole is bigger than the sum of its parts,” Jelinek says.

“In many cases, in academia there are excellent solutions out there, but people don’t know they exist. And when a disaster happens you realize there’s a lot of interesting things going on that just need to see the light of day and that’s what we want to do.”

Indeed, says Ariel University’s Levine, “There is potential for innovation in detecting situations that lead to these kinds of disasters.”

“The answer to everything is more detection,” she says. “What Israel can and should do is a robust regulation effort around this to regularly monitor air quality and soil on the beaches.”

Rosenblum says EcoOcean is collecting data from universities and research centers to send to the Environmental Protection Ministry. “And we hope to convene a conference of nonprofits, government agencies and business community to think what we could do better. We must utilize the brainpower of this country.”

This week, Environmental Protection Minister Gila Gamliel announced the allocation of ₪45 million ($13.7 million) to assist cleanup and wildlife rescue efforts; to transport and treat the waste tar; to survey and document the scope of the damage; to evaluate innovative materials to repair the coastal and maritime environment including their biodiversity; and to improve treatment and response in similar future events.

Ilana Berman-Frank, director of The Leon H. Charney School of Marine Sciences at University of Haifa, said European satellites detected oil on the sea’s surface long before Israel learned of the spill about 50 kilometers from its shores.

“We must be able to identify spills immediately by forecasting and monitoring the situation, in parallel,” Berman-Frank says. Techniques could include satellites and remote-sensing gliders and buoys.

“Once the oil has reached the shore, dealing with the damage is too late. And unless we act, this will happen again,” warns Berman-Frank. “The Eastern Mediterranean is one of the most used shipping routes so is more prone to such disasters.” Although the spill likely came from a passing vessel, Jacobs and Hann say stricter regulation and enforcement is needed for gas and oil rigs already operating off Israel’s coast and those in the planning stages.

“The most optimistic thing would be if the government would create a regional emergency power managed by the oil companies for all the offshore drilling in Egypt, Israel and Turkey,” says Jacobs.

“For many years we have been talking about how Israel is not prepared to deal with an emergency like this and now hopefully the awareness and understanding will grow. Maybe now people will listen, and standards will change.”

“It’s going to take several months, or even years, to repair all the damage and make sure our beaches are 100 percent safe and clean again,” she says.