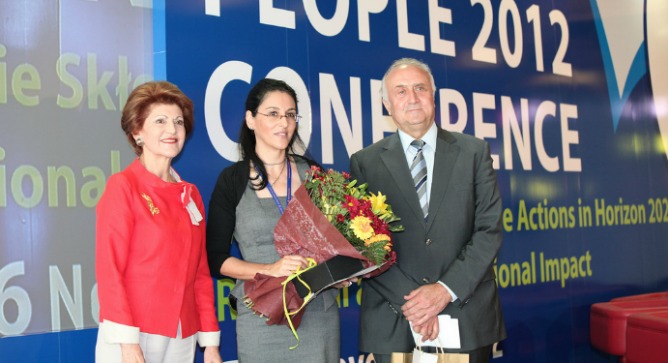 Sarit Sivan wants to bring her technology for curing a common cause of back pain into the marketplace. Winning an inaugural Marie Curie Prize from the European Commission could help propel the Israeli biomedical engineering researcher’s innovative biomaterial into the spotlight.

During her 2006 to 2008 Marie Curie fellowship in the lab of Jill Urban, a renowned spine physiologist at the University of Oxford, Sivan and her colleagues developed, tested and patented biocompatible, injectible gel-like materials that can replace components of degenerated spinal discs and mimic their natural biomechanics.

Sivan tells ISRAEL21c that previous attempts to develop such a material had to be applied surgically and they tended to ooze out “like toothpaste.” Her material is introduced in a minimally invasive procedure, and it solidifies and remains within the tissue following injection.

“This technology has the potential to relieve people suffering from back pain resulting from disc degeneration. If this [award] could do something to bring it to market, it will be worthwhile,” says Sivan, a senior research fellow in the department of biomedical engineering at the Technion-Israel Institute of Technology in Haifa.

The new Marie Curie Prize, presented in three categories on November 5 last year at the University of Cyprus, was created “to highlight the excellence and talent of Europe’s best young researchers,” said Androulla Vassiliou, the European Commissioner for Education, Culture, Multilingualism and Youth. Israel signed an agreement in 2007 that includes it in the European category although Israel is technically in Asia.

The contest was open to researchers, like Sivan, who have taken part in the Marie Curie Actions program that has supported the training of more than 65,000 researchers since 1996. It aims to reward innovation and entrepreneurship, communicating science and promising research talent.

“I hope the Marie Curie Prize will encourage other researchers and inspire more young people – especially girls – to consider a career in science,” added Vassiliou. 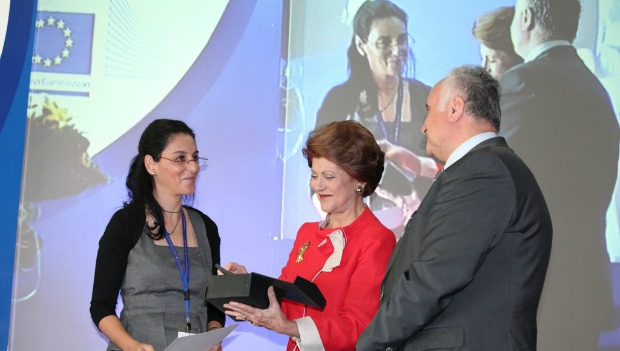 Sivan fits the prize parameters well. She was born in the southern city of Beersheva and grew up in nearby Dimona, entering the Technion after her army service. While she earned her bachelor’s, master’s and doctorate degrees there, she developed what she calls a “love affair” with the field of biomaterials for connective tissues, especially disc and cartilage.

Urban, who nominated Sivan for the Marie Curie Prize, was herself at one time the student Sivan’s current mentor, Prof. Alice Maroudas, an emeritus professor at the Technion, when she was at Imperial College London.

The intellectual property rights to the materials the women devised are co-owned by Oxford, Aston and Keele universities in the United Kingdom.

“We have done in-vitro studies, and now we are aiming at animal trials and are in the stage of fundraising for that. We hope to do that with a business partner — a spine-related or medical device company willing to go with us,” says Sivan.

Because the material is proven biocompatible, the treatment should be considered a medical device rather than a drug, which would have a faster regulatory path in the US Food and Drug Administration.

Sivan and her husband, Zohar, live in Zichron Yaakov, near Haifa, with their three young sons. Sivan teaches engineering fundamentals in biology and biotech at the Technion in addition to her research, for which the Marie Curie Prize of an iPad will undoubtedly be useful.

UNCOVER ISRAEL - Get the ISRAEL21c
Weekly Edition free by email
Sign Up Now!
Bring Israel's story to life.
Millions of people around the world rely on us to gain a deeper understanding of Israel. We are the trusted source for original content you won't find anywhere else.
You can make a difference. Donate today to support journalism that brings Israel’s story alive.
SUPPORT ISRAEL21c
Read more on:   People, biomedical engineering, Marie Curie Prize, Health