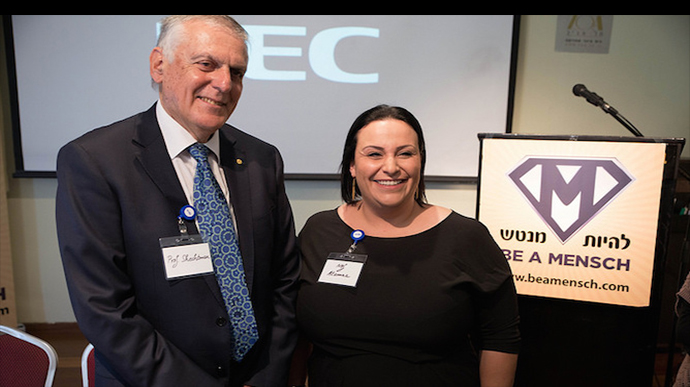 Nobel laureate Prof. Dan Shechtman says he has never gotten over the shame of a schoolyard incident when a group of his friends locked a weaker boy into a storage room.

“I didn’t participate, but I saw what they did and I am not proud to say I did not help that boy,” the 73-year-old Technion-Israel Institute of Technology professor related at the kickoff event for Israel’s Mensch Foundation, a nonprofit dedicated to promoting kindness in Israeli society.

Today, Shechtman said, he is bothered by a lack of common decency. Recently, he got up and offered his seat to a pregnant woman on the train when he saw that none of the younger passengers were doing so.

That is the sort of behavior the Mensch Foundation seeks to instill. “Mensch” is a Yiddish word for a person who acts with kindness, integrity, fairness and sensitivity.

The effort is spearheaded by Dr. Moshe Kaplan, 68, a businessman and immunologist who moved to Israel from San Francisco in 1986 and was dismayed to see infighting among religious and non-religious Jews, violence in schools and homes, road rage and a lack of basic manners.

Kaplan’s dream is to position Israel as the exemplar for a grassroots values initiative that could be duplicated internationally. The Mensch Foundation is based on Jewish values but has no religious or political affiliation. 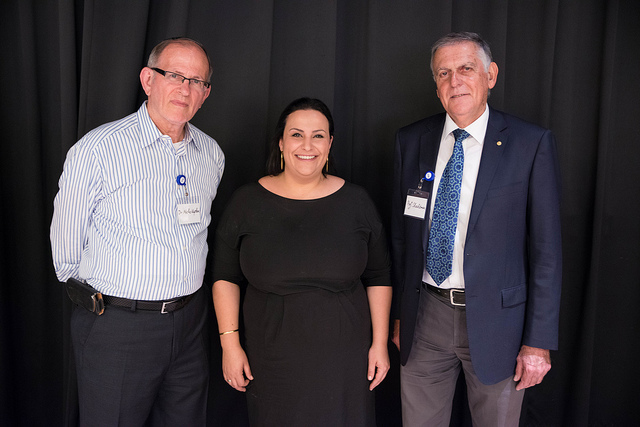 A few years ago, he produced a public-service announcement that helped him win a Jewish Agency grant to run professionally facilitated dialogues in Beit Shemesh, a city that has seen much acrimony between haredi (ultra-Orthodox) and more centrist national religious populations.

“At our clubs in Beit Shemesh, people started talking to each other and realized everyone is a human being even if they wear different clothes and have different spiritual values,” Kaplan tells ISRAEL21c.

The initiative is growing. In 2013, the informal gatherings reached 2,450 participants, youth leadership groups met in seven cities, and a dozen schools got involved. Next year, 70 kibbutz encounters are planned.

“We’ve been invited to do activities in Jerusalem and other cities, and we are developing an Internet-based program where religious and non-religious, Ashkenazi and Sephardi people can interact and build bridges.”

Kaplan has introduced religious youth to peers from staunchly secular kibbutzim. “We had a Hanukkah party with 200 members of the Kibbutz Movement youth group. We hung a huge sign that said ‘We are not enemies’ and followed up the party with a basketball game between religious and non-religious boys,” he relates.

The foundation is reaching beyond Israel’s Jewish majority as well. Master Chef champ Nof Atamna-Ismaeel, 33, an Israeli-Arab who has a doctorate in microbiology from the Technion, spoke at the kickoff event as did former Minister of Justice Yaakov Neeman and foundation cofounder Yossi Shumacher.

Atamna-Ismaeel related that her exceptional grades as a child gained her entrance into a well-regarded Jewish school where she never fit in socially. At the Technion she was fully accepted by her Jewish peers, yet she didn’t forget the pain of those early days “just because I was different.”

Despite her academic accomplishments, Atamna-Ismaeel felt something was missing from her life. “I wanted to do something to bring people together, and I thought cooking could be the way to do this. My goal is to open a bilingual cooking school for Arabs and Jews, children and adults, and through cooking change the reality. I believe we can change heads and hearts,” she said.

Retired Israeli basketball star and current goodwill ambassador Tal Brody is among the many Israeli celebrities who endorse the foundation and contributed to the companion book released on May 20, Be a Mensch: Why Good Character is the Key to a Life of Happiness, Health, Wealth and Love. 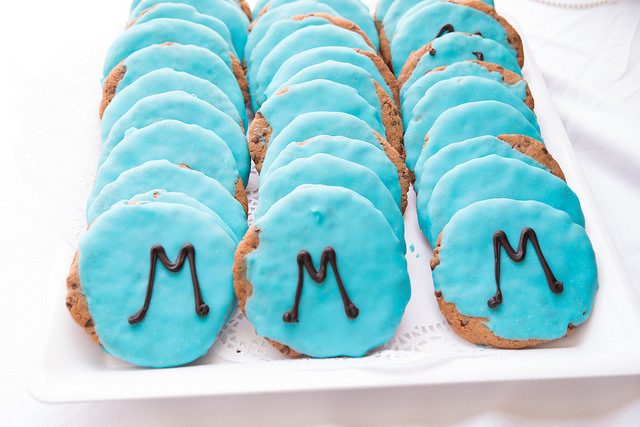 These are a prototype for proposed Mensch Foundation cookies. Photo by Doni Lerner/Doni Digital

“The successful people in our book all attribute their success to being a mensch,” says Kaplan.

Kaplan says the organization’s vision is to “reduce the disturbing trend in violence in the schools, break down barriers in the religious-secular divide, decrease traffic fatalities, improve interpersonal relationships and ultimately, make Israel a more desirable place to live.”

He is seeking grants so he can implement his plans for spreading the message, such as selling “Mensch Cookies” with a message inside suggesting a character trait to work on.

He wants to launch a national quiz competition where Israelis would evaluate their “mensch factor.” He has already started awarding an annual Mensch Corporation of the Year honor; in 2013 the inaugural award went to software company Webydo.

“If we could bring together people, and they walk away loving each other, this could be the cure for cancer,” the doctor says. “Our educational material is of universal value and will be available to Jews and non-Jews alike through the world.”