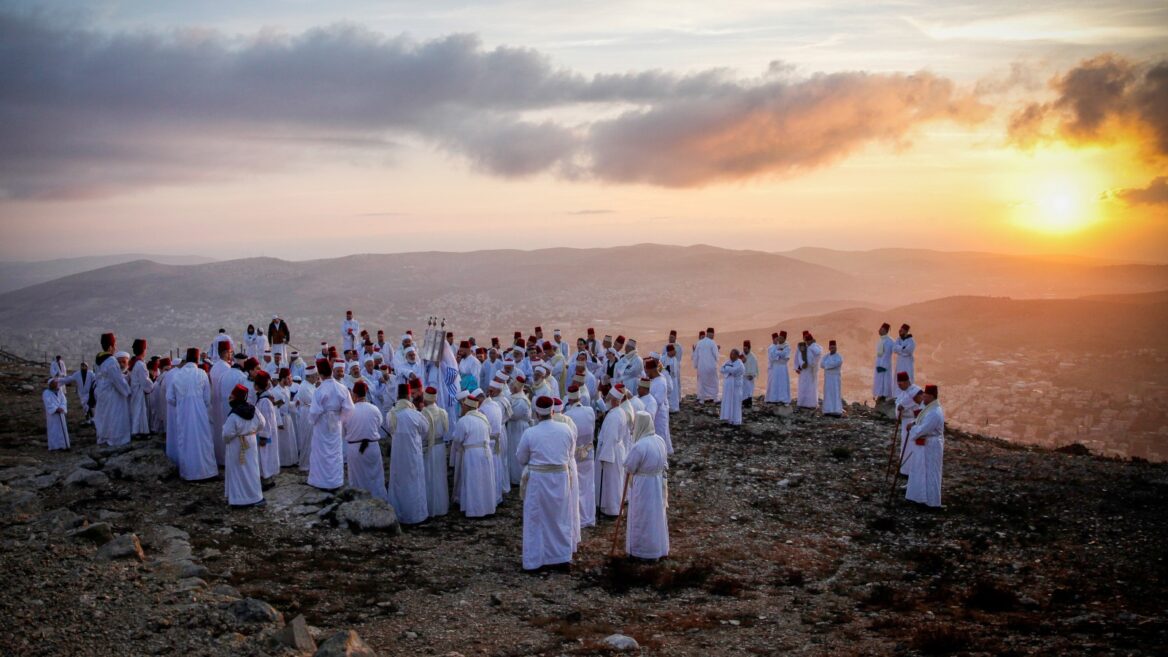 Samaritans pray during a pilgrimage marking the holiday of Sukkot on Mount Gerizim on the outskirts of Nablus, October 20, 2021. Photo by Nasser Ishtayeh/Flash90

In the tiny Samaritan village of Kfar Luza on Mount Gerizim, some 37 miles north of Jerusalem, the gregarious 78-year-old Samaritan priest Husney Wasef Cohen welcomes us into his sukkah.

While the week-long Jewish harvest and pilgrimage festival of Sukkot  was celebrated a month ago in temporary outdoor huts, the Samaritan calendar had Sukkot beginning on October 20 this year, and their sukkot are built indoors.

On a frame hung from the ceiling of his living room, Cohen’s sukkah is elaborately decorated with almost a ton of fruits and vegetables — citrus fruits, pomegranates, red and green peppers, quince, apples and even eggplants. Branches from three tree species, including palm fronds, a green tree and a lilac chaste tree, lie barely visible on top of the fruit display.

The community, too, is barely visible.

Known to many because of the parable of the Good Samaritan told by Jesus in the Gospel of Luke, the Samaritans are perhaps the smallest religious group in the world.

They identify themselves as descendants of the Israelite tribes of Efraim and Menashe. While most of those tribes were exiled by the Assyrians  in 722 BCE, the Samaritans have been here continuously for some 127 generations.

Numbering in the millions at one time — Cohen says 3 million — they are now some 840 people divided almost evenly into two communities: one in Kfar Luza/Mount Gerizim near Nablus (Shechem, in Hebrew) and the other in the Tel Aviv suburb of Holon.

Never having left the Land of Israel, Cohen said, the Samaritans were subject to slaughter and conversion by the conquering armies of the Assyrians, Greeks, Romans, Persians, Byzantines and Muslims. 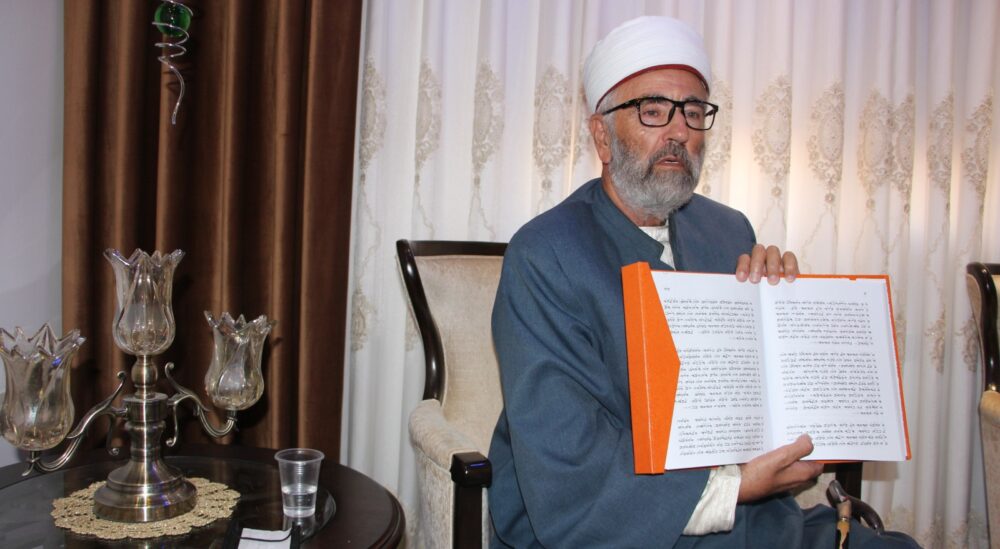 When National Geographic came 110 years ago to report on “the last of the Samaritans,” they counted barely 130 souls, said Cohen.

“Because we Samaritans have gone through so many difficult times we believe only in peace. We are in good relations with the Jews and the Palestinians,” Cohen said.

“War is a catastrophe for all. There are no victors in war so we pray for there to be real peace. When blood is shed the earth does not distinguish between Samaritan blood or Jewish blood or Arab blood.”

Like most Samaritans, Cohen speaks modern Arabic, Hebrew and English as well as ancient Hebrew, the Samaritan holy language in which their Bible is written. 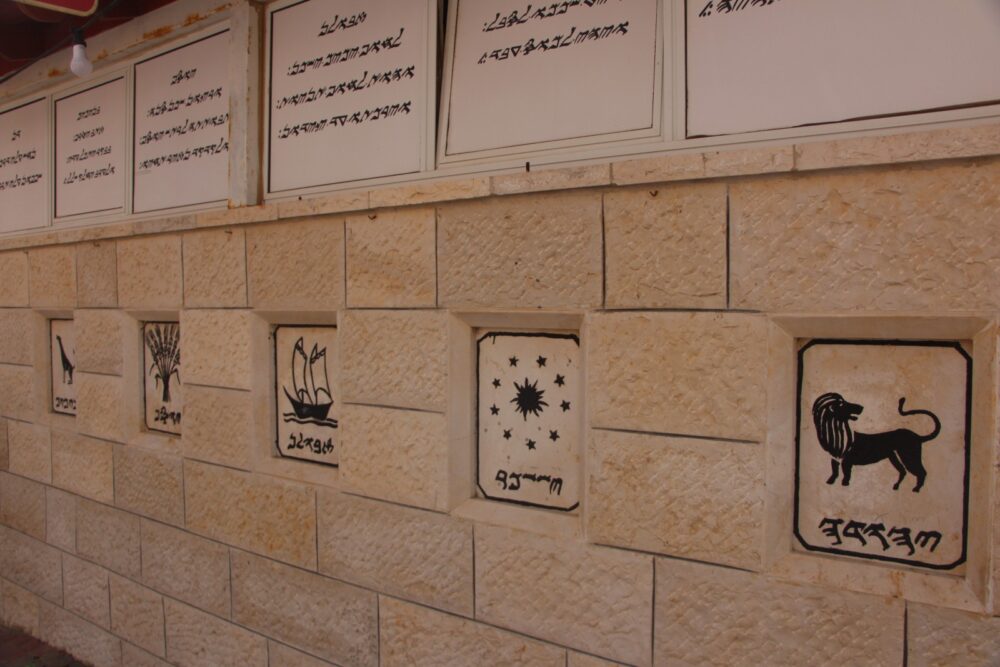 The outside wall of the Samaritan synagogue in Kfar Luza has depictions of the 12 Tribes of Israel with their names written in ancient Hebrew. Photo by Judith Sudilovsky

Samaritan boys and girls begin studying their Bible together at the age of six. But in daily life, Samaritans on Mount Gerizim speak Arabic and those in Holon speak Hebrew.

Samaritans adhere only to the Five Books of Moses in the Torah and do not follow any rabbinical teachings or edicts. They do not celebrate post-Torah holidays such as Purim or Hanukkah. 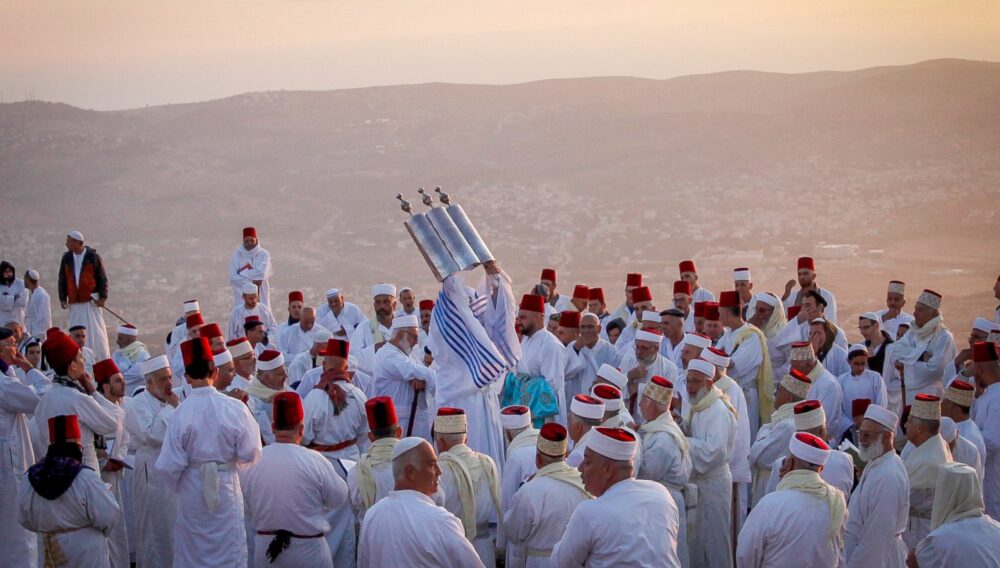 According to Samaritan beliefs, Mount Gerizim, and not Jerusalem, is where God commanded Abraham to sacrifice Isaac and also where the Tabernacle first rested when Joshua Ben Nun led the ancient Israelites into the Land of Israel.

The Kfar Luza Samaritan community used to live in Nablus but moved to their sacred Mount Gerizim in 1988 during the First Intifada because of clashes in Nablus between Israeli soldiers and Palestinian protestors. The community does not get involved in politics.

Since 1995, the Samaritans hold three identity cards: Israeli, Palestinian and Jordanian. They are the only group to do so.

Samaritans living in Holon serve in the Israeli army, but not in combat units or in the West Bank.

“Because we are a really small community we can’t be with clashes,” said Cohen’s daughter Salwa, 33, a former high-tech professional who runs the Samaritan Museum with her father.

“We are a very small community so we can’t [risk losing anyone]. Every person in the Samaritan community is very precious for us.”

Marrying within the faith 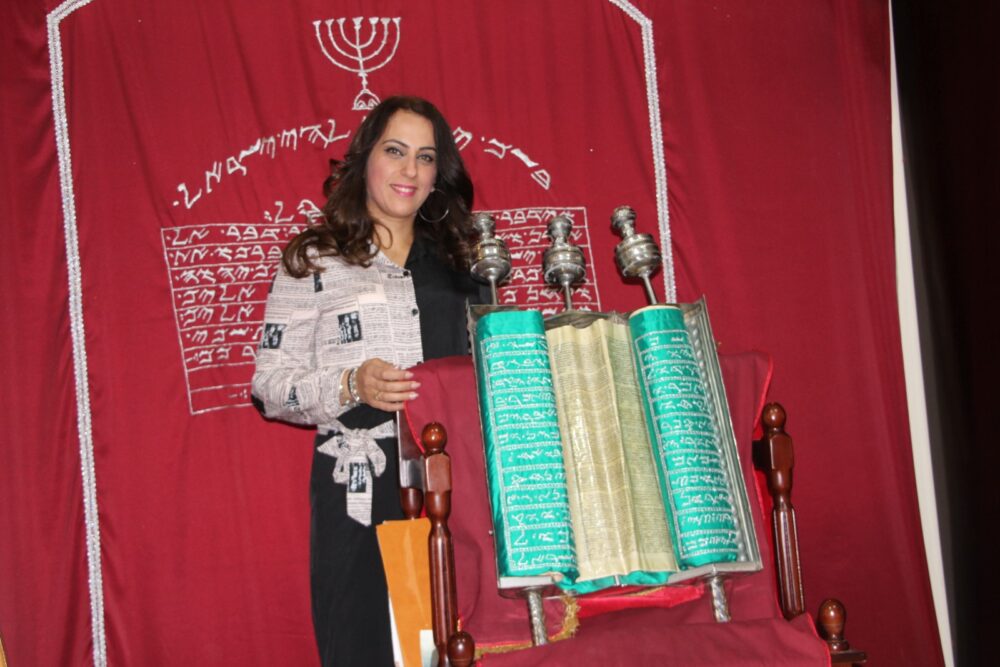 While the Samaritan community integrates into daily life both in Nablus and Holon, they are very strict about marrying only amongst themselves, noted Salwa.

To marry outside the faith means excommunication, she said.

Until recently, the biggest challenge was a shortage of girls in the community. But some two decades ago, the Samaritan elders ruled to allow some of the men to marry outsiders as long as the women agreed to become Samaritan. They brought in about two dozen brides from countries such as Ukraine and Turkey, and a few local Jewish women.

“Every girl … knows … that of the 20 or 30 boys she knows one of them will be her husband,” said Salwa, who chose to marry her cousin and is mother to three girls.

“Because we don’t have enough girls, the girls have many choices. You may think it is very odd but when you raise your children in this way they absorb it. But the good news is that the number of girls is growing so in five or six years I think we won’t need to get any girls from outside.” 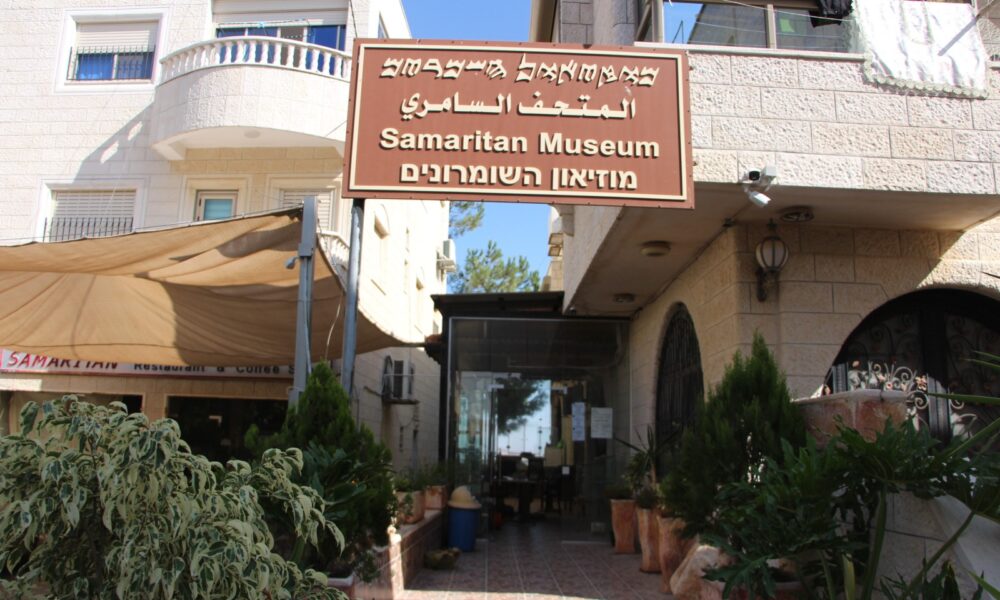 The outside of the Samaritan Museum on Mount Gerizim. Photo by Judith Sudilovsky

Inside the sukkah, Cohen who was wearing a white-and-red turban and a gray robe over a cream-colored tunic, explains that the Samaritan tradition of building the sukkah inside rather than outdoors comes from the times when locals, ranging back even to the Byzantine era, would deface the sukkah when it was built outside. 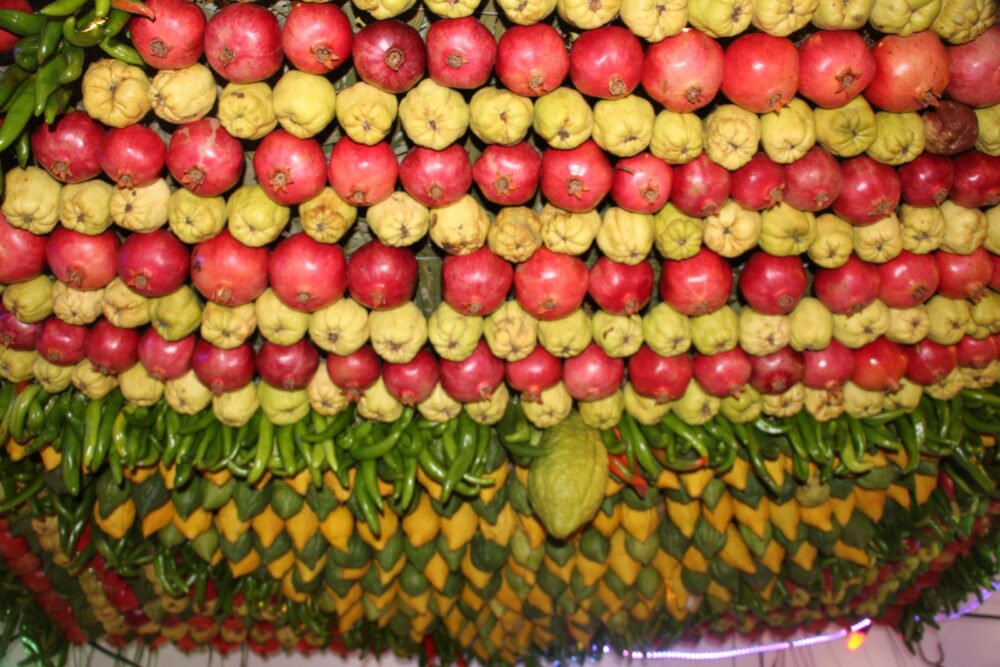 A Samaritan sukkah, laden with nearly a ton of fruits and vegetables. Photo by Judith Sudilovsky

There are other differences in how this biblical festival is celebrated by Samaritans.

While Jews bundle together willow, myrtle and palm branches along with an etrog (citron) as part of their holiday observance, the Samaritans believe the holiday mitzvah is fulfilled simply by sitting under the edge of the suspended indoor sukkah.

In the early morning of the first day of the seven-day holiday, the male members of the community, clad in white robes, ascend to the top of Mount Gerizim for the traditional holiday prayers.

Celebrants carry an ancient copy of their Torah, which they say is the oldest in the world.

On that day, the Holon Samaritans come for the pilgrimage atop the holy mountain and later share in festivities visiting friends and relatives in the village.

Everyone is welcome to his home for the holiday, Cohen said.

In the evenings, Palestinian officials and neighbors from Nablus come to greet the Samaritans. During the daytime, Israeli tour groups and Israeli representatives visit the village. 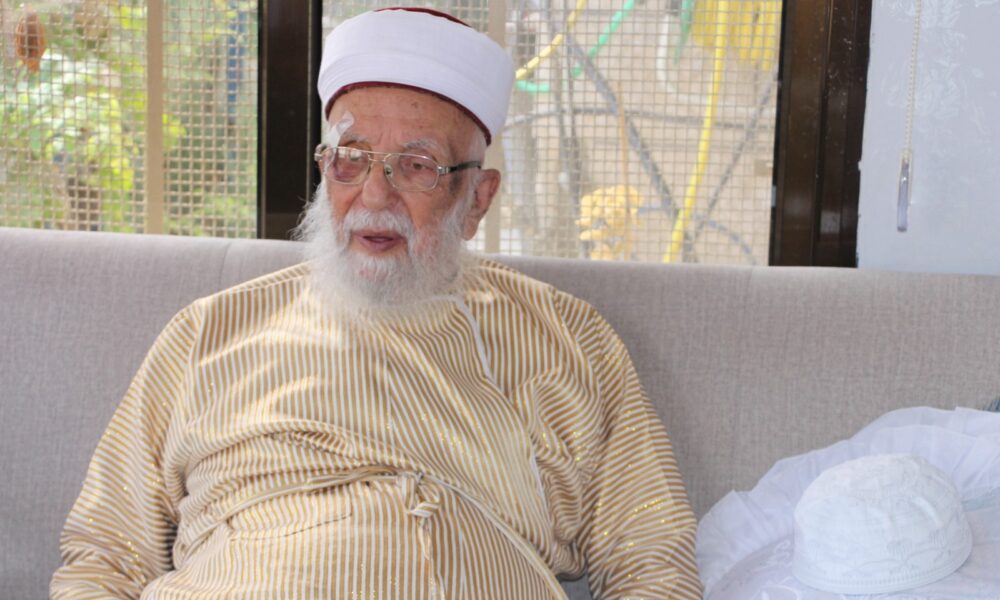 Abdallah Wasef Tawfiq, the High Priest of the Samaritans of Kfar Luza. Photo by Judith Sudilovsky

As the oldest male in the Cohen family — who according to Samaritan tradition are direct descendants of the biblical priestly caste, the cohanim — Husney Wasef Cohen’s oldest brother, Abdallah Wasef Tawfiq, is the High Priest of the Samaritans.

“My father was the High Priest 40 years ago, my grandfather 80 years ago,” he said.

While Tawfiq is the High Priest, the younger Cohen has largely taken on the role of emissary of the community. He often gives radio and television interviews, and on this Sukkot holiday was speaking to a group of print journalists.

Giving the priestly blessing to his visitors, the elderly Tawfiq was dressed in a striped gold and white robe.

He expressed his hope that Samaritans could serve as a bridge between Jews and Arabs, having a foothold in both worlds while maintaining their neutrality.

For more information on the Samaritan community of Kfar Luza/Mount Gerizim, click here.

UNCOVER ISRAEL - Get the ISRAEL21c
Weekly Edition free by email
Sign Up Now!
Bring Israel's story to life.
Millions of people around the world rely on us to gain a deeper understanding of Israel. We are the trusted source for original content you won't find anywhere else.
You can make a difference. Donate today to support journalism that brings Israel’s story alive.
SUPPORT ISRAEL21c
Read more on:   Culture, Sukkot, Samaritans, Coexistence, Diversity