Legend has it that a young woman from the Israeli port city of Acre (Acco) was betrothed against her will to an old, wealthy man in Lebanon.

As her father escorted her to Tyre to meet her intended, the distraught bride leapt from her horse into the Mediterranean Sea near the white cliff of Rosh Hanikra. In the grottoes worn deep into the cliff by the crashing waves, her sad song is said to be heard until today.

If you visit Rosh Hanikra today, you may or may not hear that plaintive cry in the rushing water of the limestone grottoes.

But you’re certain to notice the distinctive sound and sight of the waves flowing through the tunnels and sea caves at the northern Israel site.

The grottoes probably started with a series of quakes that caused cracks in the bedrock, enlarged over many years by incessant water erosion.

The Rosh Hanikra grottoes are open all year and lit up dramatically at night. A 656-foot walking track takes you through the grottoes, where fruit bats, rock pigeons, swallows and hyrax make their home. 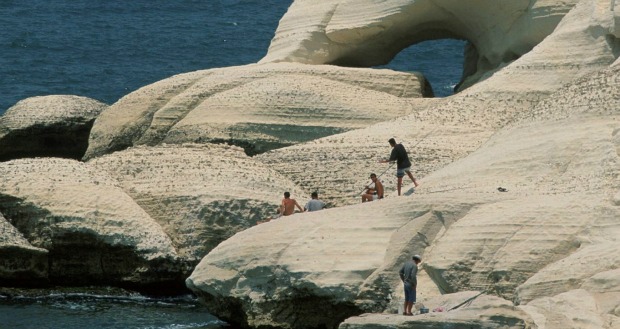 During turbulent weather, the spray can reach up 115 feet and crest over the edge of the cliff. “The grottoes are the most fun when it’s stormy because the water comes crashing through the holes,” says tour guide Joe Yudin, CEO of Touring Israel.

The two-minute-long cable-car ride leading down to the grottoes shuts down only in the most severe weather. This 210-foot ride down the cliff at a steep 60-degree angle is so popular with tourists and school groups that Yudin suggests getting there as early in the morning as possible in order to avoid long waits.

He recommends planning a day’s tour beginning in Rosh Hanikra and ending in Acre. A discounted combination ticket buys entry to Acre’s Knights Hall, Templer Tunnel and Akashi Museum as well as Rosh Hanikra and the cable car. 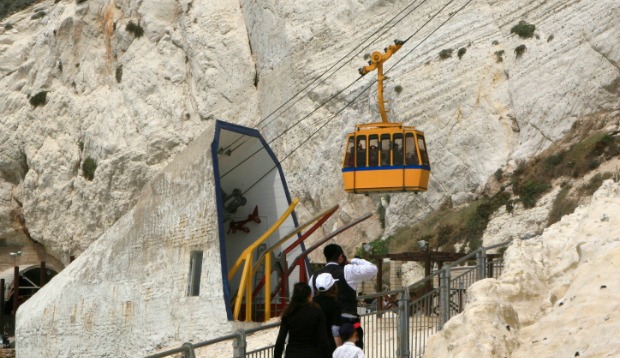 The cable car at Rosh Hanikra travels at an angle of 60 degrees. Photo by Flash90

“The cable car is the best. But you can also rent a big family bicycle and ride along the beach, which is really cool,” Yudin tells ISRAEL21c.

There’s also a simulated train ride for kids at the beach below the cliff, and that is where people with motor disabilities can access the ascent to the cable-car ride. Otherwise, take the stairs from the parking area.

“On the way back, I always take people to the border to take a picture under the sign,” says Yudin, referring to the oft-photographed sign informing you that you are standing 120 kilometers from Beirut and 205 kilometers from Jerusalem. “You can peek into Lebanon from the fence there,” he says.

Rosh Hanikra is the only cliff in Israel that descends straight into the sea. Geologists have revealed that its bottom layer is made of hard limestone, the middle is soft chalk embedded with flint, and the top layer is hard, porous dolomite. 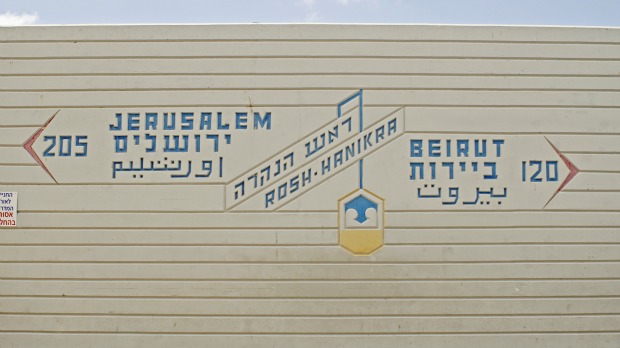 The views from the top, and while descending in the cable car, are picture-perfect. You can see the Mediterranean beach with its pedestrian promenade stretching south though Nahariya to Haifa, and little islands called Techelet (“Sky Blue”), Shachaf (“Seagull”) and Nachlieli (“Wagtail”).

A loggerhead sea turtle reserve is also found here – Rosh Hanikra is one of the only places in the Mediterranean basin where the giant turtles go to lay their eggs.

Looking out toward the sea from the grottoes, you’ll easily spot Elephant Leg, a natural formation created in the cliff by the seawater, and the fossilized starfish on the cliff itself.

Yudin recommends the 15-minute sound-and-light show in the Rosh Hanikra railroad tunnel, which was dug by the British in 1943 to extend the Cairo-Haifa line all the way to Beirut. (By the way, the tunnel provides another way to get to the grottoes for those who do not want to use the cable car.)

The show in the tunnel describes how it was built and gives a virtual tour of the grottoes, and it has several surprises in store, Yudin promises. (We don’t want to give anything away, but be prepared to get a little wet.)

When you’re done with your explorations, there is a souvenir shop, snack stand and restaurant at the site. Rosh Hanikra is open on summer weekdays, Saturdays and holidays from 9-6; and on winter weekdays, Fridays and holiday eves until 4 pm.