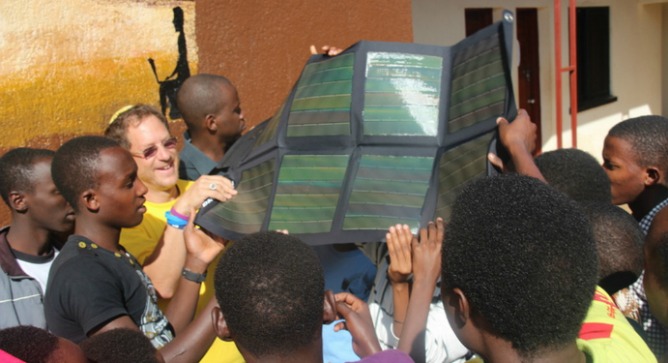 But no, every larger-than-life item – including three Nobel Peace Prize nominations for his work in freeing Soviet Jews – was really done by this 2006 immigrant from Massachusetts, a celebrated human rights activist, environmentalist, Jewish educator, journalist, solar-power pioneer, investor and entrepreneur all rolled into one.

“No wonder I’m so tired,” he quips in a phone interview with ISRAEL21c during the week CNN was airing Green Pioneers, the network’s tribute to Abramowitz and five other major environmentalists across the globe.

Following three hours of sleep, he was flying to London to meet with partners about spreading solar energy to developing African countries. “I seem to have business meetings wherever Madonna is playing, so I’m also going to my fourth Madonna concert,” reveals the co-founder of Arava Power, the force behind Israel’s first solar-energy field.

“On her previous visit to Israel, she said onstage that Israel is really the energy center of the world, and that was a sign from God that everything would be okay. Madonna is my secret weapon,” he says with a laugh.

Honestly, however, Abramowitz is his own secret weapon.

Almost anything is possible

Born in 1964 to parents whose Jewish values propelled them toward activism, Abramowitz is the fruit that fell next to the tree. 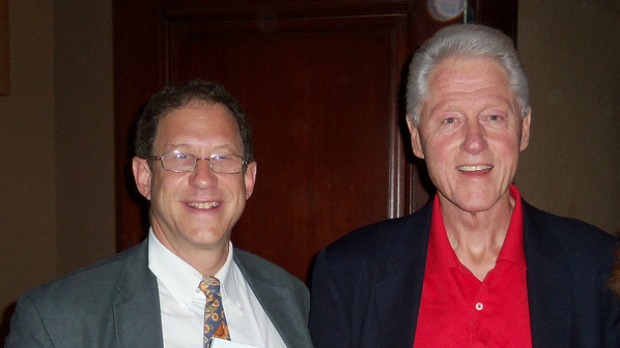 Abramowitz with former US President Bill Clinton, his partner in the Haiti initiative.

“I lucked out my whole life to get pulled into historic issues, battles and campaigns at the right time,” Abramowitz reflects, recalling how his father was at Martin Luther King Jr.’s “I Have a Dream” speech and his mother took him to rallies for Israel and Soviet Jewry, and even an underground planning session aimed at stopping nuclear plant construction.

“I had the push of the counterculture of the 1960s to the post-’67 Jewish pride and the Soviet Jewry movement, and on into the environmental age. To me it’s just what is going on in my life. I never meant to gravitate toward leadership or power, but I always wanted to have influence.”

Abramowitz was named a top influential Jew or Israeli by Moment (1991), Calcalist (2010), the Jerusalem Post and Haaretz (2011). He won a 2004 Covenant Award for Excellence in Jewish Education and 14 journalism awards.

Having organized demonstrations in 23 countries, he’s sometimes paid a high price for acting on his ideals. He was held up at gunpoint in Ethiopia while investigating the burning of Jewish homes, and was arrested twice — at a demonstration outside the Soviet Embassy in Washington, D.C. in 1985 (the US Supreme Court overturned his conviction in a precedent-setting case), and at a 1987 Jerusalem protest on behalf of Ethiopian Jews. But it all rolls off his back.

“I’ve been the luckiest guy on the planet because each thing I got involved in turned out to be the major defining issue of whatever decade it was,” he says, refusing to take credit for anything more than being in the right place at the right time.

Adopting two Ethiopian children as siblings to his three kids? The kudos go to his wife, Rabbi Susan Silverman (sister of the comedian Sarah). The two hunger strikes he led, one against Boston University’s investments in South Africa during apartheid, and the other on behalf of a Soviet Prisoner of Zion? He was just mimicking the heroes around him.

“When someone shows you how to do something that looks extraordinary, but is a powerful statement of values — and you’re in a situation where if you employed it, it could get a Hebrew teacher out of solitary confinement — wouldn’t you do that?” he asks sincerely.

“I’ve been given access to amazing role models and an activist tool kit at a young age, so it kind of makes almost anything possible.”

Father of a solar revolution

Shortly after relocating to Kibbutz Ketura, where he had lived as a Young Judaea volunteer in 1983, Abramowitz founded Arava Power Company with partners Ed Hofland from Ketura and David Rosenblatt of New Jersey.

Last May, Arava closed on eight solar projects and is developing a larger field at Ketura to produce a hefty 40 megawatts of power. Abramowitz is a central partner in an international forum led by former US President Bill Clinton to develop a solar energy industry in Haiti. He and his family recently volunteered in the Agahozo Shalom Youth Village in Rwanda, where he touted the potential of solar energy. 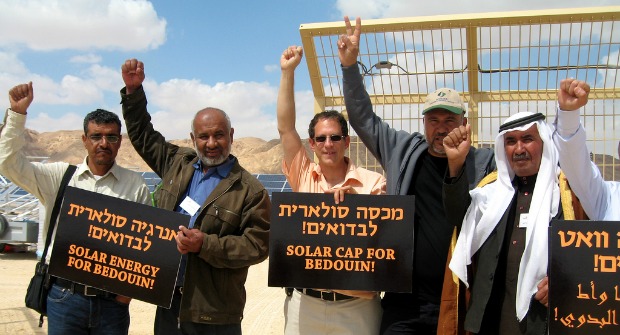 Champion of the Negev Bedouin.

Though he was long an environmentalist, buying the first hybrid car in Massachusetts, his only experience with solar energy was inventing a solar cell that won honorable mention in a regional student science fair.

“It wasn’t at the top of my mind when we went to Ketura in 2006. The plan was that my wife would write a book about adoption in Judaism, and I’d write a book on ‘peoplehood with purpose’ based on my blog. We didn’t plan to start a solar revolution. But we got there in August, and it was so hot and sunny in the Arava, which is the third most extreme desert in the world. It must have triggered something in my brain.”

He learned that although Israel is a solar technology powerhouse, all that tech was exported and nothing was on the ground. “So on the third day, I decided someone has to do something about this.” He rented an office at the Arava Institute for Environmental Studies on the kibbutz, and brought in experts.

After years of red tape, the field became a reality. Lucy Michaels, a graduate student helping in the effort, suggested that Arava include the Negev’s Bedouin population.

“That pushed my social-justice button. I didn’t think it could work, but Lucy had me meet with Bustan, a Bedouin sustainability organization, and she was so right. We knew there would be economic benefits to the community in the south, and of course those benefits would have to apply to all southern Israeli citizens.”

Example for the rest of the world

Opening another office in Beersheva, Arava Power hired Bedouin staff and identified five Bedouin families with government-recognized land appropriate for a solar field. They each signed on.

“We provide rent for 20 years, jobs for 20 years and most importantly, dignity and equality. It’s all community organizing,” says Abramowitz, who sports a bright yellow skullcap wherever he goes.

The project hasn’t been without glitches. Though the Tarabin Bedouin tribe got a license to build a commercial solar field, it was “inexplicably” excluded from tariff caps awarded to kibbutzim. Legislation is pending to correct that situation.

Meanwhile, delegations from 40-plus countries have come to see the 18,200 solar panels at work in Ketura, seeking assistance to bring the technology home.

“What I’ve done is just a down payment on what we hope to do: To make Israel the first major economy to transform from carbon-based to solar-based power as an example for the rest of world,” says Abramowitz, adding that he and his partners felt “humbled” by the CNN award. “You don’t fight the government for five or six years to get an award, but we’re not complaining.”

That book he planned isn’t getting written, though last year he did co-author “Solar Energy” with rapper Shyne — under the pseudonym “Kaptain Sunshine” — for the grand opening of the solar field.

“I’m living the book rather than writing it,” he says just before boarding his plane in Tel Aviv.