Yitzhak Rabin was the talk of the news in Israel this past week following the fulfillment of a dream.

Of course, the Rabin in question was not the former Israeli Prime Minister Yitzhak Rabin, who was assassinated in 1995, one year after signing a peace treaty with Jordan. Instead, the Yitzhak Rabin in the headlines was an 18-year-old Jordanian-born teenager who dreamed of gaining Israeli citizenship and the chance to enlist in the IDF. 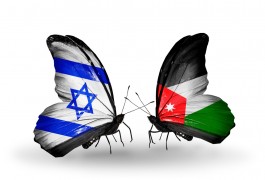 Yitzhak Rabin Namsy (his full name) was named by his Muslim parents in honor of the prime minister. Following the unusual naming of their son, the family was harassed and force to flee to Israel. In 1998, they settled in Eilat.

The young Yitzhak Rabin was informally adopted by the prime minister’s widow Leah Rabin and granted ‘temporary resident’ status. After she died in 2000, the Jordanian-born teen applied for full Israeli citizenship and dreamed of joining his friends in the Israeli army.

The late prime minister was noted for his two terms as leader of Israel’s government, signing the Oslo Accords with the PLO in 1993, and reaching to a peace treaty with Jordan in 1994. He was also celebrated for his role as IDF chief of staff during the Six Day War.

“I want to become an officer [in the army], and continue in the path of Yitzhak Rabin, may his memory be blessed,” he told a reporter in November. “I want to give back to the state in a way that would make Yitzhak [Rabin] … proud of me. I don’t understand what the problem is here.”

In the end, a lengthy court battle proved successful.