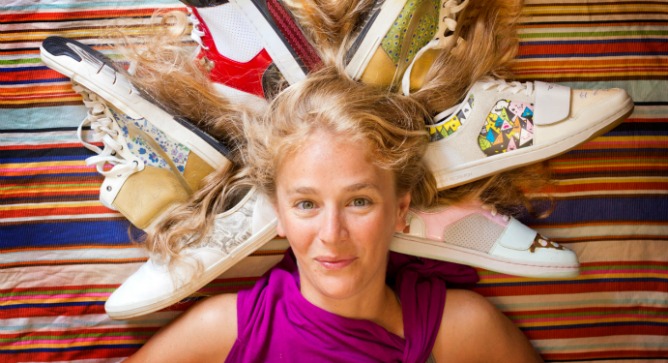 FunkKit, an Israeli product for adding temporary customized artwork to footwear, was conceived on a shopping trip.

It was 2006, and Israeli college student Moran Nir was in England on a Jewish Agency summer program.

“I went shopping with a friend who loves hats – he has one for each outfit,” Nir tells ISRAEL21c. “We went to a shoe store and he bought six pairs of the same shoes in different colors, in order to match his hats. That was my eureka moment.”

Nir got on the phone to classmates at IDC-Herzliya, an Israeli university where she was studying computer science and entrepreneurship, and proposed the idea of creating art stickers for sneakers.

When she got home, she started researching the market. And when she applied to IDC’s Zell Entrepreneurship Center for the 2008-2009 academic year, she had the beginnings of a business plan in hand.

They love it in the Far East

“It’s amazing to see how it developed,” says Nir, who tinkered with the concept at Zell along with a team of classmates majoring in management, law and government.

The stickers needed an adhesive strong enough not to come off spontaneously, but light enough to be peeled off without ruining the shoes. The kits are manufactured in Israeli facilities for printing, cutting and packaging, and disabled workers are hired wherever possible. 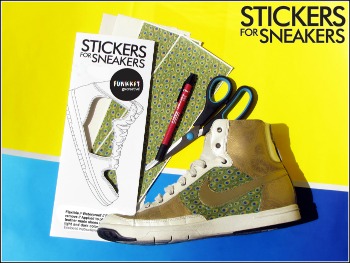 A low-tech product with high-tech in it.

She and former classmate Omer Faragi continue to run the business from Israel. They employ a sales and marketing staff in Japan, where the product first took off.

“The Zell year gave us a lot of networking connections, and after graduation we spent a couple of months rewriting and presenting our business plan and started looking for investments,” Nir says.

“Since it’s a low-tech product with high-tech in it, we did not approach VCs because it doesn’t fit their portfolio. We tried to find angel investors to help us with marketing and sales.”

“After Japan, everything started to be easier. We participated in trade shows there and people saw the product in big chain stores. Then we went to Taiwan, Korea, and global trade shows in Hong Kong. The product was introduced in other countries a few months later.”

“This is the magic of the product: It’s based on a community of designers,” says Nir. “All the designs are user-generated from all over the world. We upload them to the community, which can ‘like’ and share them. After we’ve received feedback from our community and distributors, we decide which will go to market. So it’s always trendy and always changing, and a great place for designers to showcase their work.” 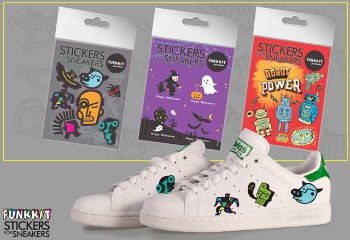 Some of the kits are made with boy customers in mind.

The FunkKit team looks for unique collaborations, she adds. For example, the first-year communication and design class at ORT College in Jerusalem is working with FunkKit as their end-of-year project, creating designs and publicity materials.

“I love to say that we bring art, community and design to footwear. We combine them with technology and passion to bring the most creative products to market.”

The already profitable company is devising promotional partnerships with entities such as sports teams. “If you wear your favorite soccer team logo on your hat and scarf and shirt, why not put it on your shoes, too? That’s the next big thing.”

When FunkKit started, Nir envisioned it as a product for eight to 12-year-olds, mainly girls. Lo and behold, boys also like decorating their shoes with funky stickers, and even 15- to 18-year-olds are buying FunkKit.

The 18- to 25 age group has shown interest, too. “Some adults ask for unique designs to add to their high heels or boots,” says Nir. “We did some holiday workshops for kids in the Israeli Museum of Cartoons in Holon, inviting people to come and draw comics on stickers for their shoes. The parents had an even better time than the kids.”

FunkKit is looking into opening sales outlets in Russia, Ireland, Brazil and the United States. Though the product can be ordered online and shipped anywhere, Nir explains, “we like that people can see the product and get involved in the design.”