A major renovation project will further enhance Israel’s network of youth hostels, already considered among the best in the world.

An aerial view of the Karei Deshe youth hostel in the Galilee.

If you think of youth hostels as dingy dormitories with communal bathrooms, the hostels of Israel will make you think again.

Turning its sights to a system of about two dozen Israeli hostels that already are operating at a higher standard than in most countries, the Israel Tourism Ministry will be contributing $6.6 million toward a $33 million project to renovate and expand popular hostels at Masada, Ein Gedi, Beit She’an, Mitzpe Ramon, Safed and Tel-Hai – and build new ones in the northern cities of Poriya, Acre and Haifa.

The upgrade is a cooperative project of the non-profit Israel Youth Hostel Association (IYHA), the Education Ministry and the Jewish Agency for Israel.

The move makes sense now, with a predicted shortage of hotel rooms in Israel in the wake of a campaign to increase annual tourism, coupled with the need for more alternatives suiting travelers on a budget.

As it is, Israeli youth hostels are a cut above the rest, since the IYHA was the first hostel operator in the world to adopt international quality management standards. Guest rooms all have cable TV, mini refrigerators, air conditioning/heating and private bathrooms. 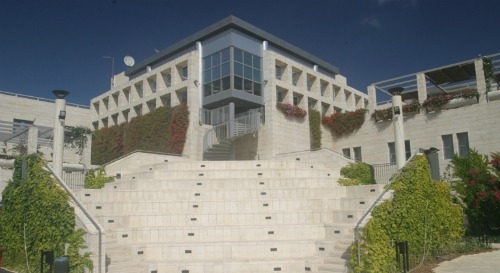 IYHA is considered one of the most advanced members of the International Youth Hostel Federation, an organization of about 90 national youth hostel associations in more than 80 countries, says IYHA deputy director general Ofer Shapira.

Though youth hostels offer a sensible travelers’ alternative, they are fundamentally different from hotels, stresses Shapira. “The similarity is only that both are places to sleep. That’s where it ends.”

The hostel concept began with a German teacher in 1909, who hit on the idea of using school buildings as guest houses for young summer travelers. The idea caught on quickly throughout Europe and spread to other areas including pre-state Israel, where the IYHA was founded in 1937.

From the start, the basic idea was to promote educational tourism by offering affordable accommodations for groups exploring Israel. Much like school buildings, hostels were designed with classrooms to hold seminars on social, educational and environmental topics, with lots of recreational areas.

“Hotels are built in a way that encourages guests to spend as much money as possible inside the hotel, such as on room service and gift shops,” Shapira explains. “Hostels are built with a lot of public spaces, giving them a different, less formal atmosphere.”

Along with basketball and soccer courts, audiovisual and game rooms, lecture halls and performance spaces, most every Israeli hostel continues to emphasize educational tourism, Shapira tells ISRAEL21c. In addition to affordability, this is why they’re favored by operators of youth tours such as Birthright and March of the Living – accounting for a large portion of one million overnight hostel stays per year in Israel.

“Six of our hostels have an eight-meter map of Israel displayed, with suggested activities, so guests can learn about the area and not only stay in the area,” he says. Many offer screenings of informational films, such as the “Great Rebellion” movie shown at the Masada hostel about the Roman-era band of Jews who defied their conquerors from the Judean Desert mountaintop.

In 1998, the first hostel opened in a non-Jewish village, the Druze town of Peki’in. Last year, says Shapira, many of the 30,000 people who stayed there participated in sessions on coexistence and minorities.

Like most of Israel’s hotels, all the IYHA hostels feature kosher kitchens and large dining areas that serve the bountiful “Israeli breakfast” as part of the package. Additional meals, however, are available at hostels only by advance reservation. 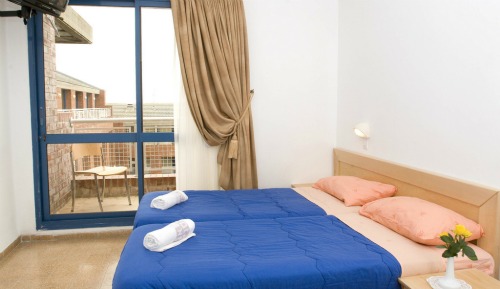 A guest room at the Shlomi youth hostel near Nahariya.

Details that work for tour groups work just as well for family events such as reunions and bar mitzvahs, Shapira points out. For instance, many hostel rooms have bunk beds and sleep up to six people comfortably. Sinks, toilets and showers are situated in separate areas to minimize waiting time.

Accommodations for guests with disabilities already are available in several hostels, and the renovation project will outfit those in Ein Gedi, near the Dead Sea, and Tel-Hai, in the Upper Galilee, with rooms designed especially for those with vision, hearing and motor disabilities.

Growing environmental awareness is leading to changes in everything from air conditioning efficiency to non-toxic cleaning materials at Israel’s hostels. Shapira said delegations from other countries’ hostel associations come to visit each year to see Israel’s innovations in this area and others.

Decisions about where to invest in new hostels and upgrades are made by the 15-member IYHA volunteer board of directors, under the leadership of Eliezer Shmueli, former director general of the Education Ministry, and IYHA director general Uri Dagul.

The focus is more on places of educational or cultural significance than on classic tourist spots. But often what starts out as a remote location – such as Eilat or Ein Gedi – over time becomes a popular destination.

“We’re spread out in good, attractive locations where we think we can give tourism a boost,” says Shapira. Having stayed in each one with his wife and three young sons, he believes Israel’s hostels provide “a fantastic atmosphere” for families.

May 23 was the official opening of the Poriya hostel, while Acre will hold its grand opening ceremony later this month, on June 20.

“I am very proud to work for the hostel association,” says Shapira. “In Israel, there is a perception that non-profits are not efficient, but in all levels we are very, very organized and focused, and we are pioneers in working toward the future.”