On November 1, it will be Israel’s fifth election in three years and seven months.

To put this into perspective, my son just turned 22, and it will be the fifth time he votes in a national election. In other countries, he might have voted once, maybe twice in this time, but in Israel he is already an old hand at the process.

Whether voter turnout will fall as a result of growing exhaustion with elections in Israel is still to be seen. Polls – although unreliable – suggest that the results of this election could be a deadlock, just as they have been in each of the last four elections.

Fatigue or not, and however frustrating, it’s important for all of us to remember that this is democracy in action.

To give you an alternative perspective on this latest of Israeli elections, we took a look at some of the more interesting numbers.

1. Israel’s recent bout of frequent elections means it is now first in the world in terms of frequency of elections since 1996.

2. There are nearly 6.78 million Israelis eligible to vote in this election.

3. In the last election for the 24th Knesset in March 2021, voter turnout stood at 67.4%, the third lowest turnout in Israeli history.

Aside from the larger parties — Likud, Yesh Atid,  and the National Unity Party, — this includes small parties like Yesh Kivun and Alei Yarok that campaign for marijuana legalization; Fiery Youth, run by Hadar Muchtar, a TikTok influencer who at 20 is a year too young to serve in the Knesset; and The Pirates, who campaign for the development and promotion of, you guessed it, pirates. 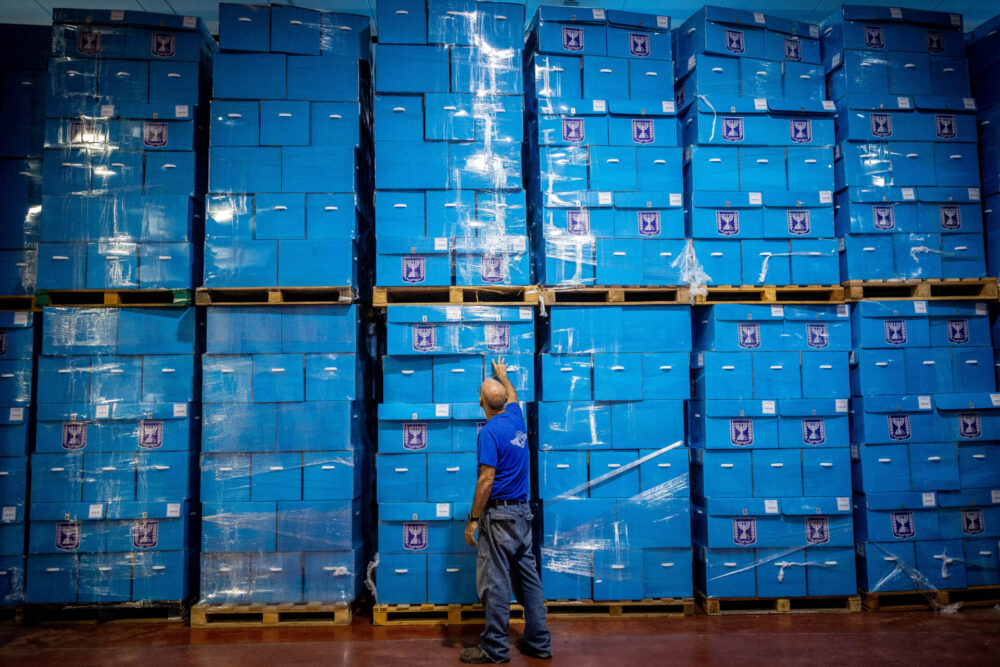 Workers prepare ballot boxes for the upcoming Israeli elections, at the central elections committee warehouse in Shoham, before they are shipped to polling stations, October 12, 2022. Photo by Yonatan Sindel/Flash90

5. Israel’s election will cost an estimated $22 per voter.

The elections have a budget of around $151 million, according to the Knesset’s Finance Committee. Based on the number of potential voters at the time the budget was prepared, that comes to $22 per voter.

6. Israel’s polling stations will be operated by some 60,000 officials, as well as more than 70,000 polling committee members.

8. Some $6.5 million will be spent on Covid-related precautions.
This is significantly down from the $66m put aside for pandemic precautions at the last election in May 2021.

9. As a paid day off for employees, November’s election day will cost the Israeli economy between $733m and $837m according to the Israel Democracy Institute.

Small and medium-sized businesses bear 43-53% of those costs. The total cost of the six election days since 2015, including this November’s election, is an estimated $4 billion according to the Israel Manufacturers Association.

Not surprisingly, businesses are calling for the government to end the vacation day rule.

For many Israelis, election day is an opportunity to go to the beach, the parks, or the malls. According to the Automated Bank Services, which manages the national payment system for credit card companies, Israelis spent $90.4m in just three hours between 9am and 12pm on the March 2021 election day.

11. The most important number of all in Israel’s elections is 61.

The Knesset is made up of 120 members. To win a majority, a party needs 61 supporters. In the country’s 74-year history, no single party has ever done that.

Instead, after every election, would-be prime ministers must wheel and deal with other parties to form an alliance, often giving small parties a power they would not normally have.

If no party can reach a coalition of 61 seats after the November elections, then the country will have to go back to the polls. For the sixth time.