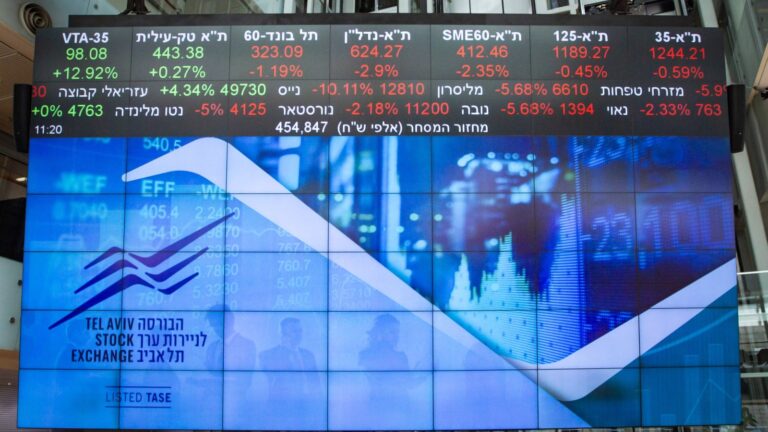 A stock market ticker screen in the lobby of the Tel Aviv Stock Exchange, March 15, 2020. Photo by Flash90

The coronavirus crisis has hit Israel’s tech sector along with the rest of the country’s economy. Exits of tech companies – either via merger and acquisition or an initial public offering of shares — declined by as much as 60 percent in dollar terms depending on how you calculate it for the first half of 2020.

But that number is skewed by NVIDIA’s $7 billion acquisition of Mellanox Technologies announced in 2019.

When you remove that deal and take into account only deals of up to $5 billion, the 2020 number is still down, but only by 22%. The number of exits, including Mellanox, is down just 32%.

The figures were reported this week by the IVC Research Center and international law firm Meitar.

“Looking at the exit activity in the first six months of 2020, we see the substantial effect of Covid-19 bringing a significant decline in exits,” said Shira Azran, a partner at Meitar.“We anticipate that H2/2020 will continue this downtrend in exits,” especially if further waves of the pandemic take place.

The bad news is balanced by potentially good news: Israeli companies in the fields of digital health, financial technologies and digital services are in general seeing increased demand due to Covid-related lockdowns and should be the basis of new exits in the future, the report said.

“We see that in many companies the growth processes continued during the Covid-19 crisis and we see specific sectors that are flourishing and were given an unprecedented ground for accelerated growth,” Azran added.

One example: the July IPO of Lemonade, which raised $319 million on the New York Stock Exchange at a company valuation of $1.6 billion. Lemonade operates in the field of digital insurance, an appropriate industry for these coronavirus days.

Petah Tikva-based PolyPid, which has developed an implant for delayed release of antibiotics, also had a successful IPO at the end of June, raising $60 million at a valuation of $272 million.

The impressive average value was influenced by three particularly large deals: the acquisition of Checkmarx by private equity firm Hellman & Friedman for $1.1 billion, a similarly priced acquisition of Armis by Insight Partners, and Intel’s billion-dollar purchase of Moovit.

The decline in exits may not be entirely related to the corona crisis. Deals are often in the works for much longer than the four-month period of uncertainty we are currently living through. Also, Israeli tech companies have increased in value in recent years, making acquisitions tougher.

Analysts expect valuations to come down as a Covid-19 “correction,” which could boost the number of future acquisitions, especially if large tech companies can acquire smaller ones at bargain prices.

In addition, most of the VCs investing in Israeli companies have already raised funds and will need to spend them, although they may be more cautious, eschewing early stage companies and focusing on preserving and maintaining existing portfolio companies.