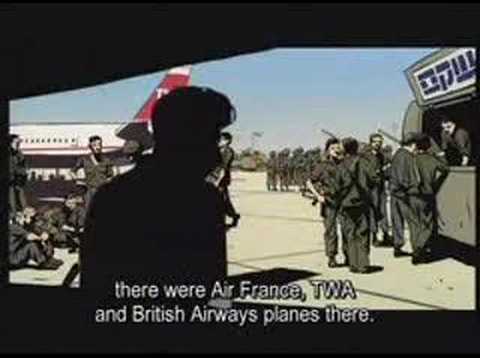 A sullen looking animated soldier is Israel’s best chance for the central prize, the Palme d’Or, at this year’s Cannes International Film Festival. Waltz with Bashir will compete against 19 other films made by some of the world’s most accomplished directors, including Hollywood heavyweights Clint Eastwood and Steven Soderbergh.

The Israeli entry is the only animated nominee, and the first-ever animated documentary to be selected for competition in the 62-year-old festival – one of the most prestigious film festivals in the world.

Applying animation to a documentary format is unheard of in film circles, according to Richard Lormand, the film’s publicist and a veteran of the international film circuit.

“It’s basically the first animated documentary ever,” wrote Lormand in an email to ISRAEL21c.

Set primarily in Beirut, the film weaves in flashbacks of the director and writer, Ari Folman, as a 19-year-old IDF soldier in Lebanon and Israel in the early 1980s. The documentary focuses on Folman’s recent quest to recover lost memories from that time, many of which were erased after the trauma Folman experienced serving during the slaughter of thousands of Palestinians in the Sabra and Shatila refugee camps by the Phalange Christian militia.

The film’s title refers to Bashir Gemayel, commander of the Phalange militia that carried out the massacres 26 years ago. Israel’s controversial alliances with Gemayel still strike a sensitive chord among Israelis today. The movie is sure to draw interest as its release comes less than two years after Israel fought another war in Lebanon, this time against Hezbollah guerrillas.

According to Folman, Israelis he spoke to were initially less than enthusiastic about his film’s subject.

“When I told people I was going to make an animated film on this subject, what did they tell me? Are you crazy, how many years will it take you to do that, 20? But look, it only took me four, not so bad,” Folman told Israel’s Channel 10 News.

But with the help of a multinational team of producers and distributors, the $2 million production has been welcomed internationally, marking the second full length animated Israeli film to enter the industry worldwide. The first, Joseph the Dreamer came out in 1962.

Waltz with Bashir uses a unique animation style invented by Yoni Goodman at the Bridgit Folman Film Gang studio in Israel. The technique takes real video, and maps it out so it can be converted into hand drawings and then into traditional animation.

The film was first shot in a sound studio as a 90-minute video and then transferred to a storyboard. From there 2,300 original illustrations were drawn based on the storyboard, which together formed the actual film scenes using Flash animation, classic animation, and 3D technologies.

Folman saw no other option for telling his personal war story from the 1982 Israeli mission into Lebanon.

“I made an animated film because I couldn’t find any other way to tell this story besides through illustrations,” Folman told Channel 10.

The film will be accompanied by a forthcoming graphic novel telling the same story, also written by Folman and illustrated by David Polansky, the creative director of the movie.

Waltz with Bashir’s official selection at Cannes is just the latest in a series of prestigious festival successes for the Israeli film industry in the past half decade. These include last year’s first prize award by the film Sweet Mud at the Sundance International Film Festival and a best foreign film Oscar nomination for another Lebanon-themed movie, Beaufort.

Last year four feature films and three short films were official selections at Cannes where the directors and writers of the filmJellyfish took home a Camera d’Or award for best first-time filmmakers – the second Camera d’Or for an Israeli filmmaker in the last four years.