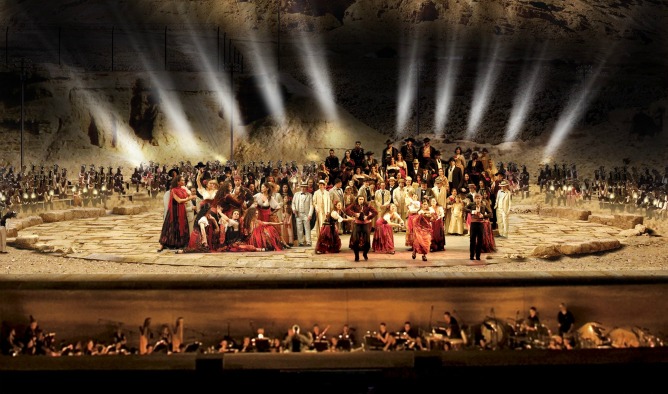 The Israeli Opera returns to Masada this week with a majestic production of Bizet’s Carmen. On the backdrop of the stunning ancient fortress at the lowest point on Earth, the five open-air concerts will draw some 50,000 opera newcomers and devotees.

Since first staging Nabucco in 2010 and then Aida in 2011, the Israeli Opera has made it a tradition to stage a grand production annually at this magical setting. 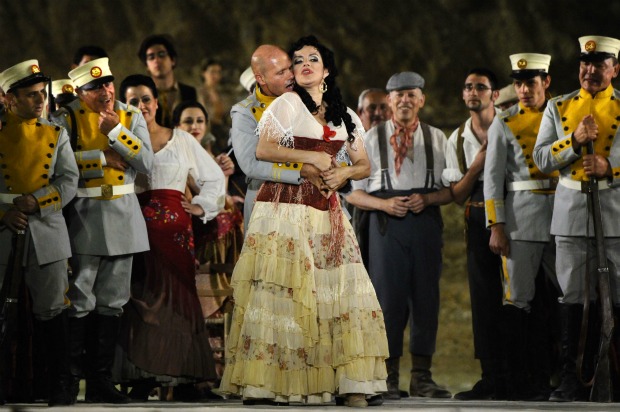 And while there are many aspects of the show to write about, Israeli opera fans should remember this name: Na’ama Goldman.

The 26-year-old mezzo soprano was the talk of the General Rehearsal last night.

Listed briefly in the program as a cover for the roles of Mercedes and Carmen, Goldman was given the chance of a lifetime last night after Canarian Nancy Fabiola Herrera – who has performed the title role of Carmen all over the world — and Italian mezzo soprano Anna Malavasi – also meant to perform the title role – both called in sick (one fell and sprained her shoulder; the other had sinusitis). Naama Goldman. Photo from Israeli Opera website
Most of the audience had no idea that Goldman’s performance was the first time she was performing it on this stage. The young Israeli did a magnificent job and deserves the standing ovation she received when conductor Daniel Oren put his baton down.

Herrera was meant to take on the title role for the premiere. She performed the first two acts but then gave way to Goldman mid-show, citing a sore throat. Some critics said Goldman’s voice lacked maturity while others were blown away by the clarity. There was no denying the exceptional baptism-by-fire performances she gave.

It was Romanian soprano Brigitta Kele (Micaela), who happened to be sitting to my right, who told me about Goldman’s feat. Kele – who sported a hospital mask halfway through the opera – explained that for many of the international performers, the desert production was proving to be a strain on their voices.

The sand blown by the wind coupled with the desert heat had caused a number of the artists to suffer sore throats and stuffy noses.

Still, Kele said, she and her fellow visiting performers were only too happy to be in Israel. Kele – who is making her Israeli Opera debut with Carmen – raved about Tel Aviv (where first rehearsals were held) and said the desert setting really was exceptional.

Of the three productions to take place at the foot of Masada, Carmen was being hailed as the most challenging to date.

Organizers said there were some 2,500 workers involved in creating the site — a 3,500 meter stage with 30 tons of lighting and sound fixtures and a reception area, parking and seating venue built from scratch and set to be completely dismantled the morning after the last show.

While impressive, it was the ‘who?’ that everyone asked about at the start of the production when the cast change was first announced, that turned out to be the most talked about aspect of the evening.

And, of course, that next year’s grand-scale opera at this spot will be Turandot – and that work on the production is already underway.

UNCOVER ISRAEL - Get the ISRAEL21c
Weekly Edition free by email
Sign Up Now!
Bring Israel's story to life.
Millions of people around the world rely on us to gain a deeper understanding of Israel. We are the trusted source for original content you won't find anywhere else.
You can make a difference. Donate today to support journalism that brings Israel’s story alive.
SUPPORT ISRAEL21c
Read more on:   Blog, carmen, Opera, Pop Culture, Masada, Culture, Music, Entertainment, Art in Israel