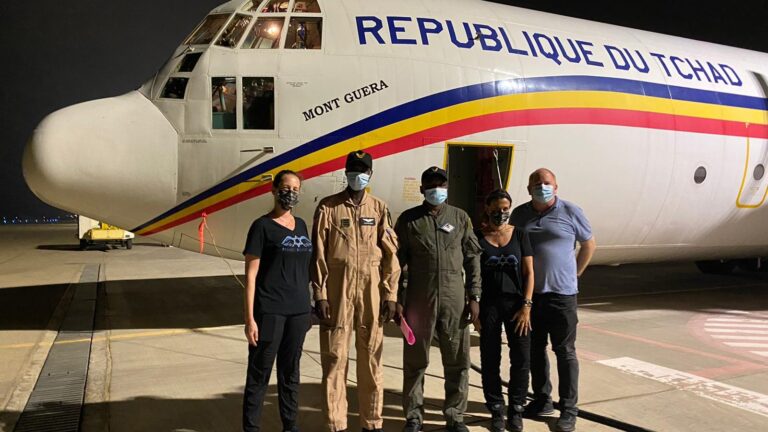 From left, Israeli Flying Aid COO Maya Zuckerman; the pilots of the transport plane sent by Chad; IFA CEO Gal Lusky; and Itai Melchior from the Foreign Trade Administration of the Israeli Ministry of Economy and Industry. Photo courtesy of IFA

When Israeli Flying Aid delivered several shipping containers full of donated medical equipment and food to refugees and orphans in Chad last October, IFA founder and CEO Gal Lusky said they would be back.

Last week, despite the pandemic, a Hercules military transport aircraft took off from an Israeli military base in the south, filled to capacity with items donated by IFA and the American Jewish Committee (AJC) — 2,000 six-person tents, personal protection equipment (PPE) for medical teams, backpack sprayers to eradicate malaria-carrying mosquitos, and more.

“The operation was completed tonight after 24 nerve-wracking hours,” Lusky told ISRAEL21c on September 17. “It was amazing. The pilot was so emotional when they finally landed at 1 a.m.” 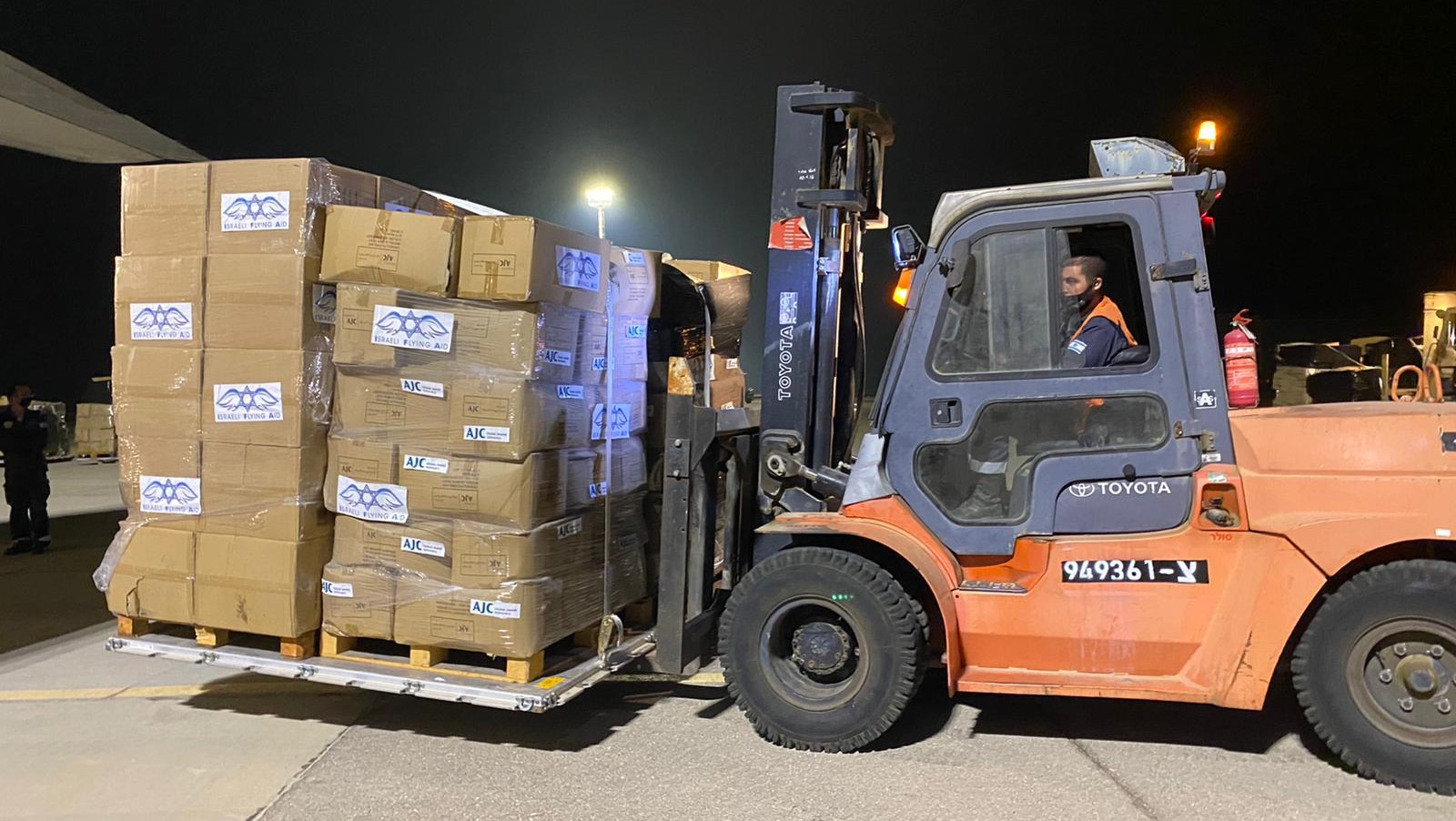 Emergency supplies for Chad being loaded on a plane in southern Israel on September 16. Photo courtesy of Israeli Flying Aid

With all the turmoil in the world, people aren’t paying attention to what is happening in Chad, Lusky says. The African country has absorbed many refugees from neighboring countries who have been victimized by radical Muslim jihadis including Boko Haram. One of the biggest refugee camps, with 30,000 people, is near Lake Chad.

“Nobody is speaking about the floods at Lake Chad,” Lusky tells ISRAEL21c. “They suffer from terrible malaria there. In that one refugee camp there are 12,000 cases of malaria.”

Chad Cabinet Chairman Abdul Kareem Déby came to the Israeli Prime Minister’s office a couple of weeks ago and described his country’s situation to the National Security Council.

“I received a call from that meeting,” says Lusky. “Our prior mission in Chad last October was discussed and we were asked to help. I said, ‘You send the plane and I’ll stock it.’ The National Security Council made all the technical arrangements for the flight.”

This time, Lusky didn’t go along but she may do so on the next trip sometime in 2021.

“We’ll be there again with medical personnel to train them in respiratory care and ob/gyn surgeries,” she says, explaining that girls as young as 10 are often raped or forced into marriage.

“We have already shipped 40 tons of high nutritional-value food and one container of medical equipment, and we’ll distribute that to orphanages and places that suffer malnutrition. And we’ll support the hospital there dealing with malaria cases.”

Lusky concludes, “It was a great honor to carry out a second mission, and especially the extraordinary cooperation with the National Security Council and Prime Minister’s Office and the chairman of the Chadi Cabinet.”